Publin was given a write up on the BBC travel website as part of a feature by Sean O’Neill on Dublin pubs in the run up to St. Patrick’s Day. 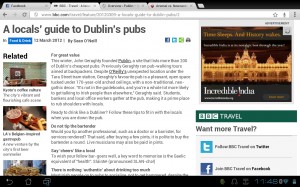 That now means Publin has been featured in The Irish Times, The Daily Star, Hot Press, and the BBC. Hopefully more people will spread the word about Dublin’s cheapest drinks and best pubs!