post-title The end of Arthurs day?

The end of Arthurs day? 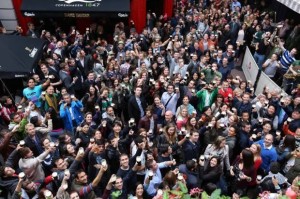 Shouting out ‘To Martha’ or ‘To Llamas’ last night would have been received as well as  getting up on the table and doing Gangnam style. The gag is officially dead and nobody wants to be the last one to use it.

By all accounts Arthurs day this year was a much more toned down affair and not as widely celebrated as previous years. Of course areas like Dame Lane were packed with revellers, but it’s rare that that area isn’t packed on any day of significance, having as it does 6 pubs in a confined area. Strolling around town last night between 6 and 8pm, the difference was notable. Several pubs that were offering a free pint to the first 100 people in had maybe half that number. Those pubs would have been turning people away in previous years.

So what went wrong for Guinness? Did the negative backlash finally gain momentum or were people just not really bothered with it anymore? Several people on twitter noted that they had no idea Arthurs day was on until they saw some talk about it on twitter and online. Advertising for the day has been scarce this year. This could possibly be down to two things. One, Guinness thought the day was more established than it was and decided that they wouldn’t have to spend as much on promotion this year. Or two, they recognised that the day was more of a sensitive issue than it had previously been and scaled back promotion accordingly.

Complaints surfaced in the weeks leading up to Arthurs day for several reasons. The arguments that got the most prominent media attention were those about the strain it puts on the emergency services and its fostering of Ireland’s already unhealthy association with alcohol addiction and abuse.  One of the ways we know that there were far fewer people celebrating Arthurs day last night is that emergency services reported a 50% decrease in the need for their services compared to Arthurs day last year. I would add that there are 3 other major complaints or issues with Arthurs day that were bubbling under the surface and ultimately contributed to its poor showing (comparatively speaking).

First, those that simply don’t like being told what to drink and when. People accept that advertising and marketing is a part of modern life, but they become hostile to it if it insists too much and becomes too invasive. People don’t like to feel like they’re being controlled. Second, there’s those who dislike the portrayal of Arthurs day as a celebration or Irishness or culture, when it is more about a piss up than anything else. This compliments the first argument in that it rejects the marketing narrative of the day. Some people will still go out on Arthurs day, but will make a point to drink beers brewed by Irish owned companies like O’Harass, etc. The third argument would be that Guinness do not provide equal support for their smaller, reliable, and consistent customers. Several pubs last year complained that while larger bars that charge more were getting free Guinness and money to pay for acts, smaller pubs weren’t given as much as a few free glasses, leading to small boycotts (one of the pubs closest to the storehouse took this stance last year).

What it boils down to is that people become bored with things that don’t bring them something new. The marketing campaign for the first year was nothing short of brilliant, but, like anything with a catchphrase, it quickly becomes seen as a fad. It did well to last as long as it did.

Arthurs day seems to have lost the good will of the people, or has at least divided them sufficiently to ensure that it can’t reach the heights of previous years. Will it be back next year? I suppose it’s all about how much Guinness made from it this year and if it’s worth fighting another PR battle to protect their brand. I’m sure there will be a lot of figure crunching in James’ Gate in the next few weeks.