post-title We crossed Dublin without passing a pub.

We crossed Dublin without passing a pub. 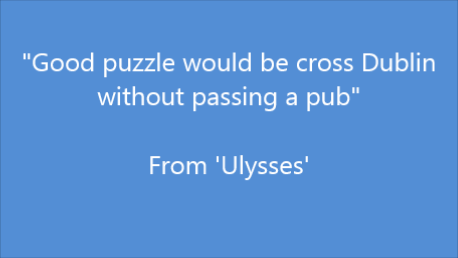 On Friday the 7th of August we took it upon ourselves to walk from one side of Dublin to another without passing a pub. A strange proposition for a website dedicated to pubs to actively avoid them and make a curiosity out of it. We made a time lapse video of the walk that you can watch in this article.

“Good puzzle would be cross Dublin without passing a pub”, so it said in Ulysses, and so it had to be. In 2011 computer engineer Rory McCann devised a route that crossed Dublin without passing any pub. Using open street maps he found possibly the only workable route across the city and giving us our opportunity to take on the task. Link to route.

I started the route on the bridge at Baggot street, dressed as a muggers dream, with a plethora of technology strapped to me and hanging from me. I had a smart phone strapped to my shoulder for live broadcasting the walk on the periscope app, an slr hanging around me to capture video for a time lapse video, an iphone in hand to live tweet the walk for those that didn’t want to or couldn’t watch the live video, and a notebook full of directions in hand.

During the course of the walk a few dozen people tuned in take a look at the publess walk, some probably from abroad, bemused as to why anyone would want to avoid pubs in a city famous for them. 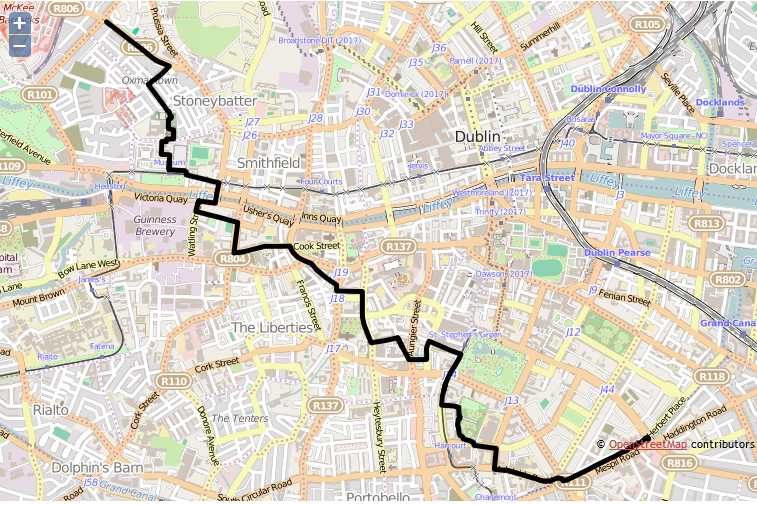 The route takes you up Wilton terrace, down Adelaide road, near the national concert hall, through Iveagh Gardens, down Harcourt street (the half without any pubs), eventually by DIT Aungier st, past St Patricks cathedral, down the hill at St. Audeons church, down Watling street to the quays, across the James Joyce bridge, through Collins barracks and Arbour Hill cemetery, through Stoneybatter, and up Aughrim street to the finishing point at the North Circular road. Phew!

Obviously I didn’t list all the directions there, as I’d prefer if you read on. The route can best be described as higgledy piggledy. Avoiding pubs means the walker must manouevre around several streets, only to double back on your route on the other side of the buildings.

Along the way we passed 3 abandoned pubs that have long since lost their license. There’s what was once O’Byrnes across from DIT Aungier street, which is now in a very sorry state, Mother Redcaps on Back Lane, which still has a beautiful facade, and Leonards on Watling street that was used as ‘The Napper Tandy’ IRA pub in Love/Hate. We understand that the latter was bought by Guinness, given that it was almost within the grounds of the brewery.

We did pass the walls of the Guinness brewery, but that doesn’t count at all since it doesn’t qualify as a pub, and neither is their a public bar on that part of the brewery. Still safe.

When thinking about doing the challenge, we weren’t quite sure whether it would be in any way interesting. ‘So, you’re going to actively avoid pubs and try to somehow make it interesting?’. I suppose it’s the curiosity of having done it rather, than the adventure of the walk itself that makes this a semi-interesting story. It’s more an interesting headline than anything else, and I suppose that’s why we thought it might be a worthy pursuit.

It’s never been easier to cross Dublin without passing a pub, given that the number of pubs in Dublin has been steadily dropping for a few decades now. In 1904 when Ulysses was set, there would have been 13,000 licensed pubs in Ireland, 1 for every 250 people in Ireland, not to mention the illegal speakeasies and shebeens. Today there are approx 7,000 in Ireland, making the task in Dublin significantly easier than it ever has been.

Walking Dublin without crossing a pub sounds like a hop skip and a jump compared to a man named David Blackmore who walked the whole length of Ireland South to North without passing a pub. It was 457 miles and took him 25 days. There were several instances where he encountered a pub and had to turn back for 10 miles to find an alternative route. That can’t be a good feeling. He did plan his route out a head of time, but naturally there’s going to be an old pub that hasn’t quite made its way onto google maps yet.

That kind of task might be a bridge too far for us, but we do have another adventure under consideration for the not too distant future.Would it be possible to touch the door of every pub in Dublin in 24 hours? Dublin city from canal to canal and from the port to the Phoenix Park. I’d estimate that’s around 200 pubs or so. We’ll plan the route, see if its feasible, and maybe give it a go.

We finished our walk of 7.5km in 1 hour and 15 minutes at a brisk pace. There was a black cat around 50 metres from our finish line, but we just gave it a pet and it didn’t seem to affect our luck.

So, if you ever wonder or hear someone asking whether it’s been done, now you know. Now…..off to the pub.

Listen to us talking about the walk on the Dave Fanning Show on 2FM here.