post-title The Boars Head: The little pub with the big sporting history

The Boars Head: The little pub with the big sporting history 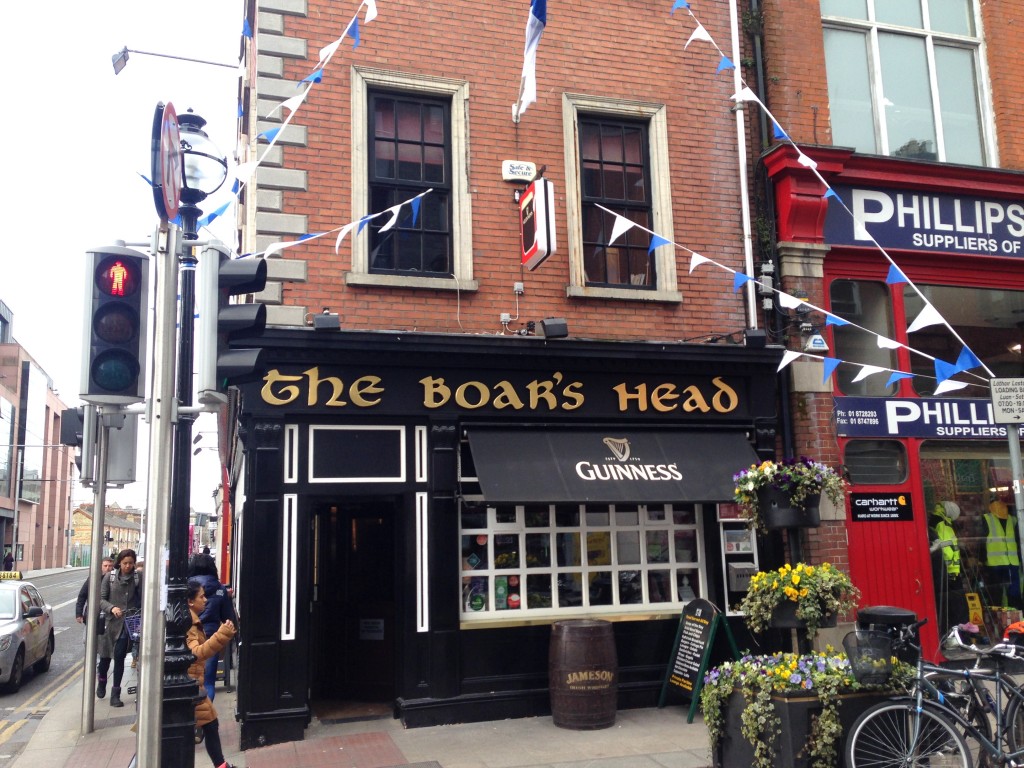 When you think of a pub in Dublin with a strong GAA tradition, you would likely immediately imagine a place that has been open since the 40’s, somewhere that people used to go for a pint after a match before heading on a long long journey home. But the reality of the fact is that the pub that has one of the strongest GAA connections, also has one of the more newly created traditions.

The Boars Head on Capel street was taken over by Hugh Hourican and his wife Ann in 1994, and his story about how the pub became synonymous with GAA, with Cavan, and with the Dubs is an interesting one. Hugh and Ann met while working in the bar trade in New York. They’re both from Cavan, but it took a trip to another continent to meet each other. The two run it very much as a family pub.

Hugh tells me that it was a friendship with Paidí O Sé that began the influx of GAA patrons to the pub. Not only did Paidí bring people into the pub, but he also started a tradition that makes a seat or standing room in the Boars Head one of the most sought after spaces in Dublin on All Ireland final day and the Monday after. 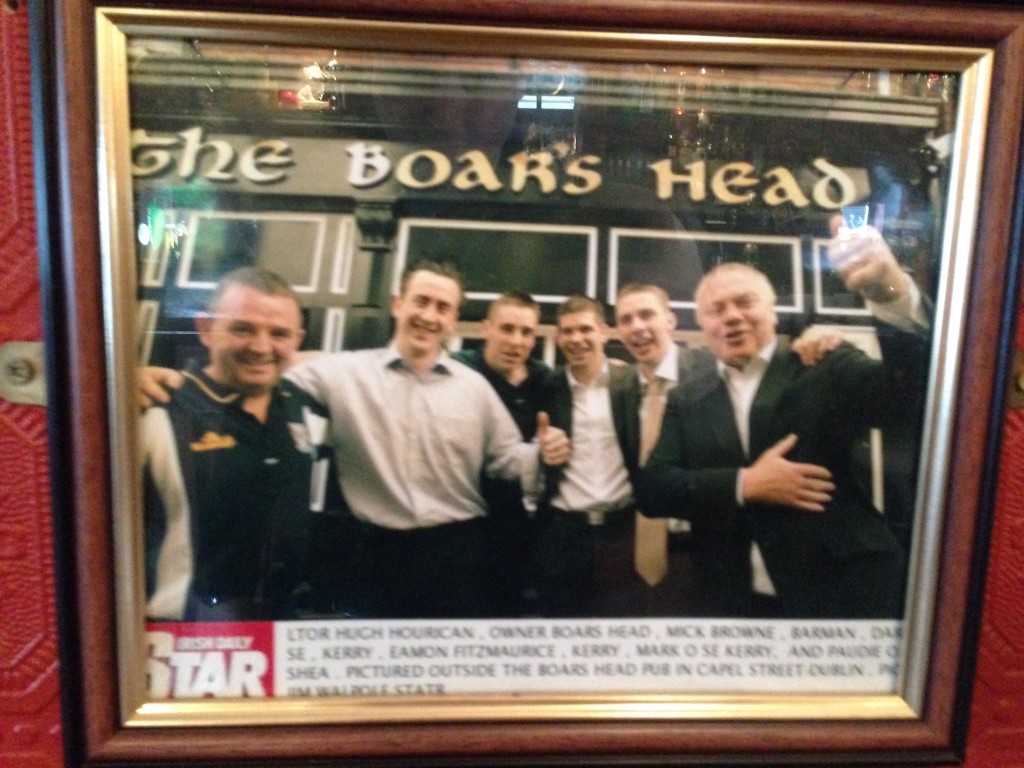 It is now tradition for the winning team to bring the trophy to into the Boars Head, and has been so for the last 15 years. This obviously creates a great deal of excitement around the bar, and automatically makes it a hub for GAA based activity.

It’s not just the All Ireland that’s celebrated here, but also the youth championship and the Sigerson cup. That means there’s a graduation for anyone winning a trophy that always involves the Boars Head. You would imagine that a youth championship winning player in for a pint after the match might think ‘In a few years I could be in here with another trophy’. 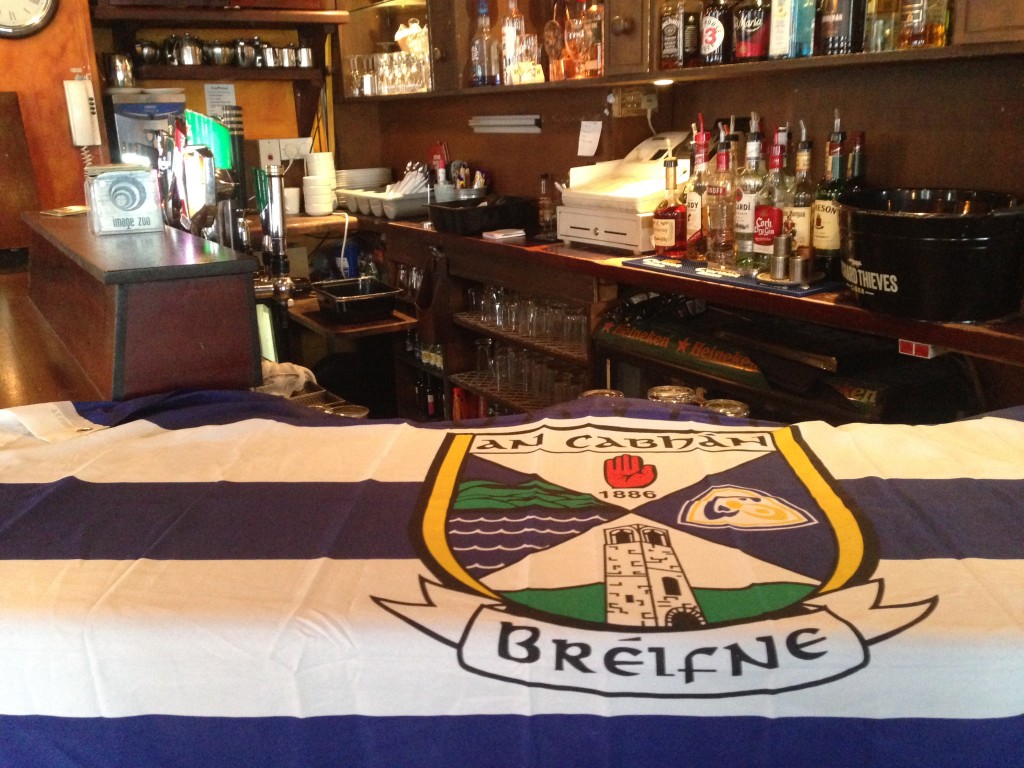 Hugh himself is a Cavan man and makes no secret that his dream would be to see them win an All Ireland and carry it back into the pub. He’ll have a chance to see them in glory this weekend in the division 2 final against Tyrone. Indeed, Hugh is expecting a very busy day, given that Dublin are also playing Kerry. He’s already got all the flags up and was in the process of putting up another Cavan flag inside.

There’s a great pride taken in this pub from it’s association with the GAA and other sports, and also a definite recognition and thankfulness to the people who helped to make this atmosphere around. Hugh singles out Paidí O Sé, who started the All Ireland tradition, the whole O Sé family, Paraic Joyce, the broadcaster Daithí O Sé who can frequently be found here on match days (sometimes forcefully sporting a Dubs jersey), and a number of others who we’ll get to in due course.

It’s this gratitude that Hugh is keen to press home. He insists that he keeps a simple bar, charges a reasonable amount for a pint, and that his friends and others have done the rest. It’s known as a culchie pub in Dublin, and I think Hugh means that it’s a welcome home for young people first moving to the city. Where they can still go in for the atmosphere of their home and chat GAA over a few pints. 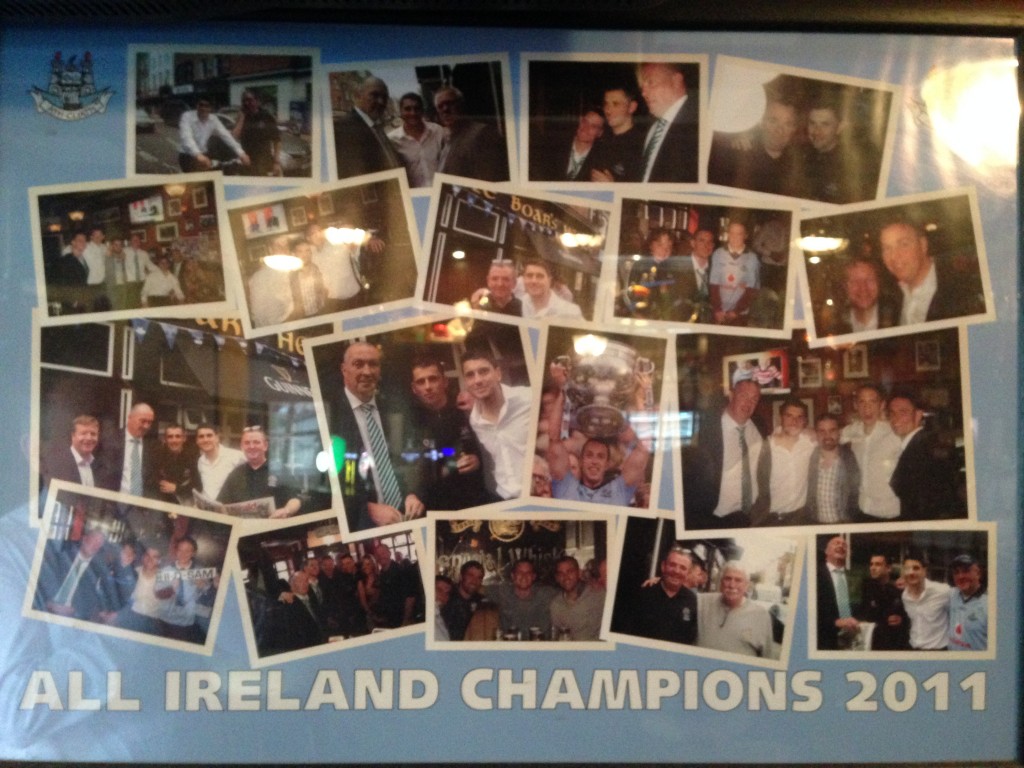 Some mornings a few people such as Dublin’s Keith Barr, along with Donal Barrett, Joe Keogh, John Condon from Louis Copeland’s, and Paul Gormely meet up for a coffee in the pub to discuss GAA. They mockingly call themselves the ‘GAA experts’. At least that’s according to Hugh. The others might take the name a little less tongue in cheek.

On the Wednesday before a semi final clash with Kerry, 2 Dublin footballers, Alan Brogan and Barry Cahill, were in for a bit of lunch and a chat. Hugh remarked that there would be some craic in the bar come Monday….after kerry had won the match. The two lads assured Hugh that it would be Dublin that carried the day and that they would be be the first ones in celebrating. Sure enough, the following Monday the win was secured and there were the two lads ready to make Hugh eat humble pie. 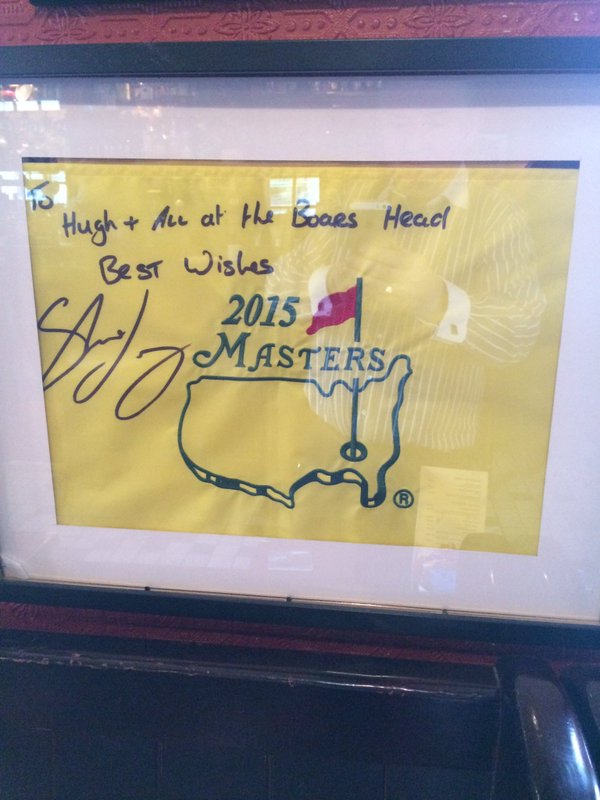 A gift from Shane Lowry to the pub.

The pub has a connection to other sports as well. Alex Higgins was known to drink in here and developed a friendship with Hugh. Ian Woosnam used the pub as his base to do interviews when he was captain of the Ryder cup team that played here in 2006. Hugh has another golfing Pal in Shane Lowry, who is a big GAA fan and patron of the pub. Lowry actually took the time during the Masters to tweet words of congratulation to Hugh and the pub after Cavan’s victory in their last match.

The pub features in a number of sporting books, including 2 about Alex Higgins, one by Paul Galvin, and another by Tomás O Sé. They all talk about the tradition in the pub.

The best results for all involved this weekend would be both the Dubs and Cavan winning. That would make the publican and the city very happy. If you were to go into the pub on any day of the week, you’ll probably meet someone heavily involved in the GAA. If you go in on a match day, you’re guaranteed.

Our intention when writing this article was only to talk about the pub, but you can’t talk about the pub without talking about Hugh. It’s his obvious enthusiasm for GAA and his friendships that make this such a warm and memorable environment for so many.