The fascinating antique auction in The Long Hall in 1972 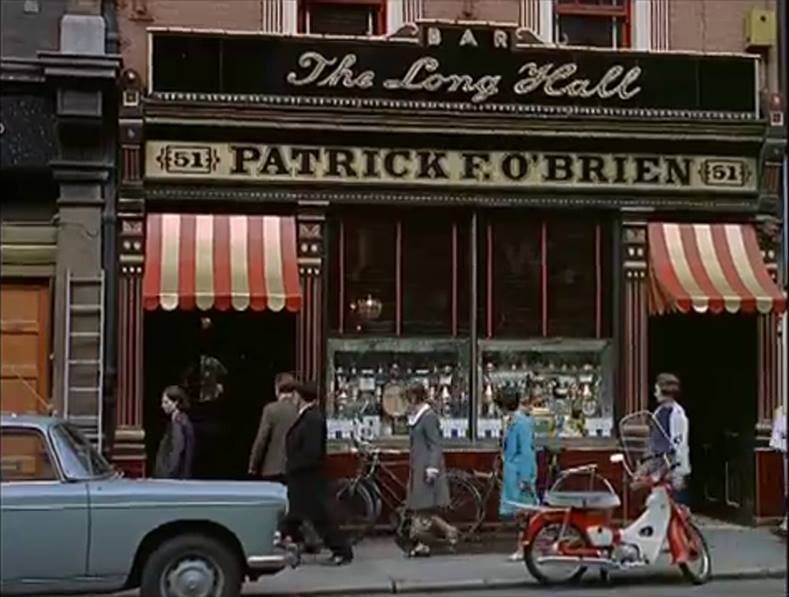 The Long Hall was sold in 1972 to Gerry Houlihan for the sum of £80,000 at an auction run by Hassett and Fitzgerald auctioneers following the death of the previous owner Patrick F. O’Brien. A few months after the sale of the pub came an auction of its contents , amassed by O’Brien since the early 1940s.

According to the current owner, Marcus Houlihan, Patrick O’Brien was an extraordinary collector of antiques and packed the pub with items of interest from all over the world. In 1972 there was an auction to sell on a collection 30 years in the making.

When the pub was initially put up for auction there was some concern that the building might be bought for development purposes, destroying the history of a pub that had been in operation since 1766. The Irish Independent in 1972 wrote:

‘I understand that Mr. Houlihan intends to run the premises as a public house which will allay fears that it was to be pulled down to make way for an office and shop development.’

It wasn’t only the family of O’Brien that benefited from the sale. 9 of the staff were due a windfall, which amounted to £3,500 each according to then cellar manager, William Devitt. It appears that the staff managed and ran the pub in the absence of O’Brien, who died in 1970. 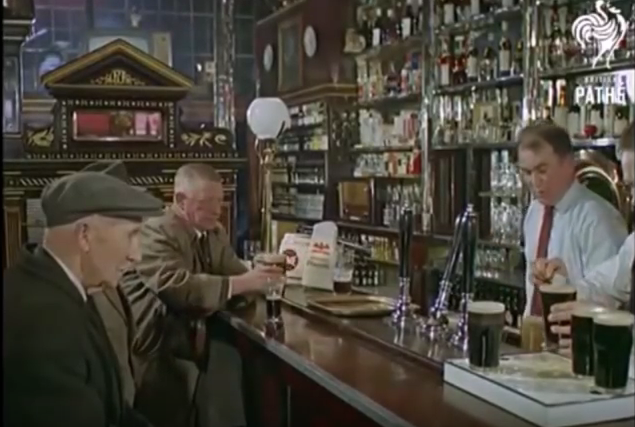 In the auction notes, the contents of the pub were noted to contain ‘original paintings by Jack B Yeats, antique mirrors and glass and wallpaper hand-painted in gold … Incidentally, the antiques which are scattered around the 200 year old bar will be auctioned separately, after the premises has been offered’.

And so they were. On April 15th 1972 an advert appeared in the Irish Times announcing the forthcoming auction. It read: ‘Important fine art and furniture auction. Contents of the Long Hall, 51 South Great Georges street, Dublin 2. Auction of contents of bar and lounge to be held on premise, on Thursday20th April.’

Pub auctions in the modern day are usually an opportunity to get rid of existing furniture and make some money back when the pub is being moved on. It is extraordinary that a pub would be in possession of 2 Jack B Yeats painting, which nowadays would be extremely valuable. We have made attempts to find which paintings these were by contacting the original auctioneers and the Yeats society, but we have been unable to come up with any information. 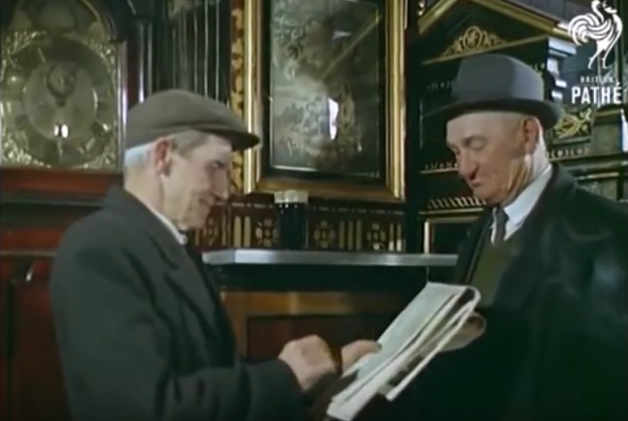 Two gentlemen reading the paper in 1965. A painting and silver shield on display in the background

The auction itself lasted an entire day, with the antiques being sold from behind the bar with a gavel to the large onlooking crowd. Gerry Houlihan, the new owner, paid £10,000 to buy back a number of items that were being sold off. These included ‘antiques, embracing, clocks, paintings, ornaments, and old firearms, which decorate it in staggering numbers’. You can still see the firearms mentioned hanging on the walls on the left of the bar towards the back. So too can you see the grandfather clock, produced by a clock maker in Temple bar in 1881.

The fact that Houlihan paid £10,000 for the antiques when the whole pub went for £80,000 shows you just how valuable the contents of the pub were. We don’t have any indication as to what fraction of the lot this £10,000 purchase represents.

While researching newspaper archives relating to the auction we came across an advert in the Irish Times in 1945 stating that Patrick O’Brien was putting the pub up for lease at an annual rent of £47 16s. After talking with the current owner, Marcus, we speculate that this may have been a short term lease so that O’Brien could travel the world on a hunt for antiques. With the end of the second world war, O’Brien would have been afforded an opportunity to travel once again and to add to his growing collection. 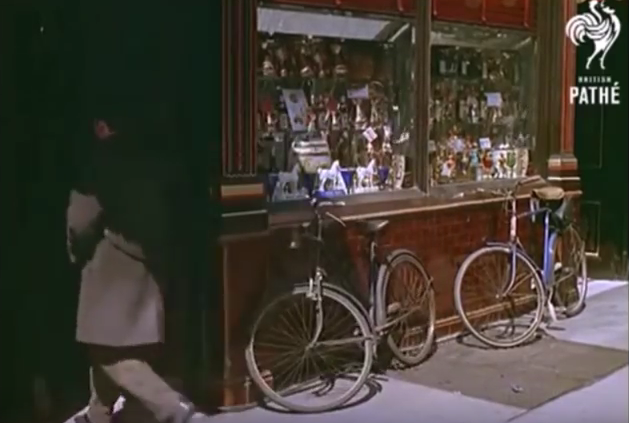 Marcus also told us that O’Brien had so many antiques that he would hire someone every weekend to come in and polish his collection. It wasn’t just the ground floor bar where the antiques were on show, but also the whole upstairs above the bar. The front window of the bar also had an impressive display of brass and silver that can still be seen in old videos and photos of the pub.

Aside from the adverts prior to the auction, and some mention in An Irishmans Diary in The Irish Times afterwards, there isn’t very much detail available regarding the total amount of items sold or the price they went for. A mention in the Irishmans diary surely means that it was an event well publicised and known to the public.

We’ll continue to look for information on the Jack B Yeats paintings and the antiques sold that day. If you know anyone who attended the auction, we would very much like to hear from you. publinie@gmail.com

Patrick O’brien traveled the world in search of antiques and items of interest, bringing them all back to a pub on Georges street, making him an extraordinary collector and traveler of his time. You can still see his name in some of the fixtures around the bar. And, although most of his collection has moved on, he is still very much remembered in the pub.