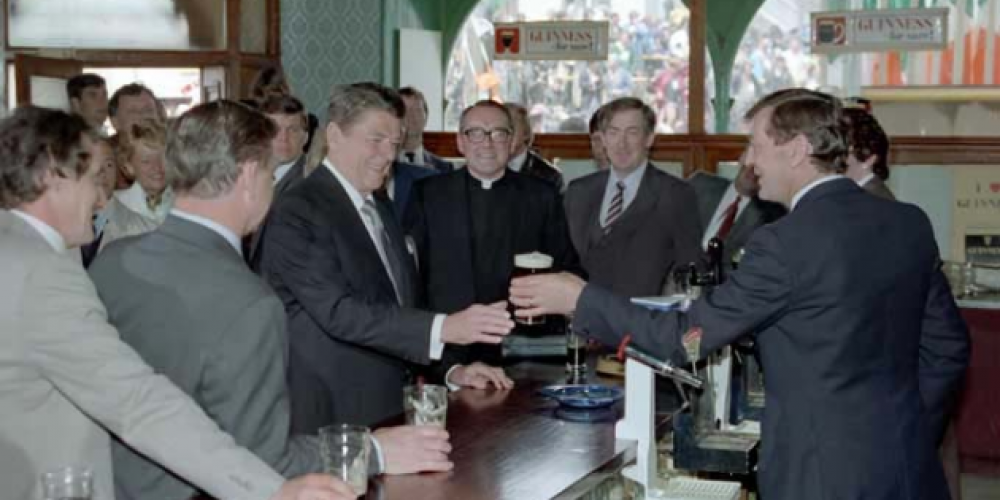 Kennedy’s 1963 visit to Ireland is was a celebration by the Irish of having one of their own in the White House. Kennedy spent several days in the country visiting Galway, his ancestral home in Wexford, and addressing the Dáil. But he didn’t visit a pub on this occasion. He did, as a young journalist, make a visit to Mulligans pub on Poolbeg street in the company of Irish Press news editor Jack Grealish in 1947. Paddy Flynn, a barman at the time remembered that Kennedy drank a bottle of lager. The pub began to get more notoriety and trade when Kennedy became president. More information about his visit to Mulligans can be found in the book ‘Mulligans, Grand old pub of Poolbeg street’ by Declan Dunne.

JFK also apparently visited Ryans of Parkgate street, according to their website.

We don’t know a huge amount this visit, but Carter was photographed in McGrattans bar on Baggot street in 1996. The pub has a dining area, so we presume Carter and his wife Rosaleen were having something to eat. There were no cameras around, so we don’t know if he had a Guinness or not. A quote from President Carter on the walls of the pub quotes him as saying that he’s “crazy about the place”.

Then president Ronald Reagan paid a visit in 1984 to Ballyporeen, Co.Tipperary where some of his Irish ancestors hailed from. Customary as it is for American presidents to have a pint in an Irish pub when they visit, his advance team found that O’Farrells pub in the village had a room named after the President, ‘The Ronald Reagan salon’. Reagan visited and sipped a pint of Smithwicks and off he went back on the campaign trail. The bar was later renamed ‘Ronald Reagan’s’ in his honour.

Some years later in June 2004 a member of the board of trustees of the Reagan foundation and museum paid a visit back to Ballyporeen to find that the pub was closed and up for sale. He offered the owners $100,000 and the pub was now in the possession of the Reagan foundation. They packed up all the paraphernalia, furniture, and other bits and sent it to California to be put on display in the Reagan foundation museum. It’s still there today with the same bar, stools, and other fixtures. The O’Farrell family went to the unveiling of the relocated bar and poured the first pint of Smithwicks from the taps.

Clinton was also brought to Bertie Ahern’s local, Fagans in Drumcondra in September 1998. At 4.30pm Clinton was asked if it was a bit early for a drink. He replied “It’s never too early for a pint”. Link.