post-title All the south side Beer Gardens and Sun Spots for Summer in Dublin.

All the south side Beer Gardens and Sun Spots for Summer in Dublin. 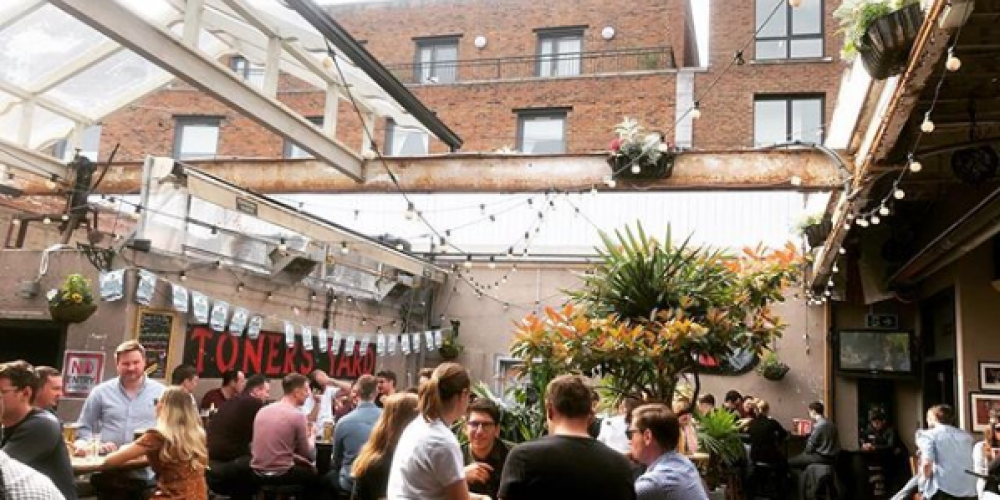 Dublin has a surprising amount of outdoor areas around the city, especially south of the Liffey. Whether they get sun or not is another matter and a good deal of them have roofing that blocks some degree of sunlight.

There’s no better way to enjoy Dublin than out in the sun with a cold drink in hand.

We’re trying to be as comprehensive as possible, so if you know of a pub or area that deserves to be on this list, let us know. We’re only really covering the city and centre and as far out as Rathmines, Ranelagh, Ballsbridge.

Toners have an amazing beer garden at the back of this Victorian era pub that keeps a degree of the the old style feel of the inside bar. There’s loads of seating, several televisions, and table service. They even have a fully functioning bar outside in Toners vaults building.

While The Swan doesn’t necessarily have a beer garden, it deserves inclusion on this list for the patch of seating it has on the York Street side of the pub. These seats get an exceptional amount of sun over the course of a day.

Slatterys in Beggars Bush have 2 areas for you to get a bit of sun. There’s the enclosed area to the front where they take the canopy off on good days, and there’s the highly innovative indoor area they have inside and to the back of the pub where they have a retractable roof. It’s available for bookings.

There’s a number of picnic tables at the front of The Barge. It’s one of the few areas that leads out onto a body of water, which is always pleasant to look at. try a JW Sweetman beer while you’re here.

Kennedys on Westland Row has outside seating on both sides of the pub, with some raised above the path with a degree of comfort.

The Old Storehouse has a nice outdoor area accessible through the pub or via large double doors from Crown Alley. They have picnic tables that usually get a bit of sun. The best part about this area is that they have a hatch into the snug bar for easy service.

At the back of Camden Exchange is an outdoor area with a retractable roof. A perfect spot for cocktails and grub in the sun.

As well as having really good food and live music, Darkeys also have a decent area to the back of the pub. While it might not get sun all the time, it’s a pretty nice spot to sit outside and enjoy one of the main Irish brews they have on tap.

You only need to look at the above photo to get a sense of how glorious it can get in the perimeter around Devitts on Camden Street.

At times there seems to be as much seating outside the Beer market as in. A large stretch of the path on in the immediate vicinity is taken over by tables and chairs. Understandably so when you see how much sun the area gets on a consistent basis. There’s loads of rotating brews to try here too.

Enjoy an Irish craft beer or cider on the South Circular side of the pub that gets a very decent amount of sun.

There are 2 outdoor areas in The Bleeding Horse, one with a retractable canopy to the left as you look at it and one with picnic tables on the right hand side.

Open the Guinness gates in Ned O’Shea’ on Lower Bridge Street and you’ll be greeted by rows of seating on either side of the beer garden. Some of the seating was originally used in the old Croke Park.

O’Donoghues on Merrion Row has essentially a laneway beer garden that gets sun towards the end.

Upstairs in O’Neills on Suffolk Street is what they call their rooftop beer garden. Although there are buildings around it, it does get a fair amount of sun.

The Duke has a section of seating out the front.

The Bankers on Dame Lane has a long row of outdoor seating on one of the most interesting and bustling nightlife strips in the city. You can have food served outside here.

Fitzsimons in Temple Bar has a rooftop beer garden that is probably the best of its kind in the city.

Although largely covered, the beer garden in the Bernard Shaw is still a fine place on a sunny day, especially with a pizza from The Big Blue Bus.

DTwo on Harcourt Street has a really cool beer garden, especially for those who are fans of sport on the big screen and summer BBQ’s.

The Odeon has a really good beer garden to the left of the main building that can also be rented out for private parties. They usually have BBQ’s here during the Summer.

The Pav in Trinity College is an old favourite for those who want to sit out and be guaranteed sun all day. There’s only a few picnic tables here, but people are free to sit on the grass so long as it’s within the cordon area.

The beer garden in The Horse Show house in Ballsbridge is huge and offers outdoor and covered sections.

The Bath on Bath avenue is a favourite for people going to matches in the nearby Aviva stadium but during the Summer it has another type of draw in the form of the front beer garden area.

Upstairs in The Taphouse in Ranelagh is an outdoor area with highly sought after seating.

Bar Rua is certainly a colourful building, decked out as it is in dozens of hanging baskets. At the front they have multiple tables for outdoor dining and drinking.

Bruxelles on Harry Street can remove the canopy to expose the patrons to a good dose of sunlight during the day. Maybe have a massive bowl of mussels with your drink.

McGrattans has an area beyond their roofed outdoor areas where you can sit out and get a good bit of sun. There’s tables and chairs set up in the open area and there’s lots of standing room too.