post-title Celebrating over 40 years behind the bar: Frank Boyce in Devitts.

Celebrating over 40 years behind the bar: Frank Boyce in Devitts. 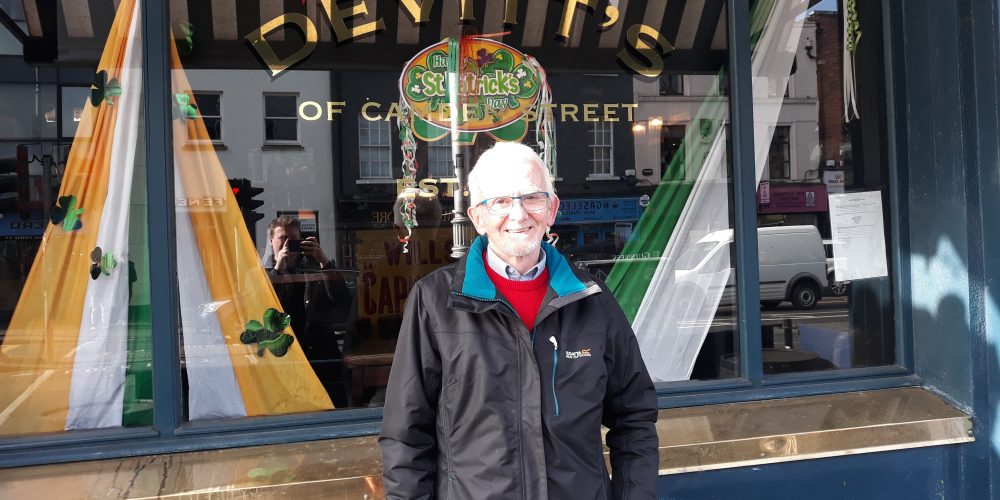 Saturday the 9th of March 1968 to Friday the 8th of March 2019. That’s how long Frank Boyce has been pulling pints and serving customers behind a bar, most of it in Devitts pub on Camden Street. 51 years of service, 42 in Devitts. The pub was bought in February of 1977 by Willie Devitt, opened on the 4th of July 1977, and Frank was recruited a month later from The Stillorgan Orchard.

As we sit down to chat about Frank’s life’s work in the trade people are constantly walking by patting him on the shoulder, saying hello, and wishing him well. It’s clear that Frank is a man very well liked and even adored in this pub. He retired the Friday before we met and it seems he and others who work there are still processing the significance of his tenure and the prospect of Frank not being behind the bar anymore.

One of the current proprietors, Paul Mangan, is eager to make sure Frank gets the acclaim and props that he is due. Willie Devitt, who still has a share in the pub is similarly keen and sits in on my chat with Frank to share his memories of Frank’s contribution to the pub and to recollect his working relationship with Frank over more than 4 decades. Not only did Frank work with Willie over this time but he also got to see Willie’s children grow up on the premises at a time when it was common for publicans and their families to live on the floors above the pub. This area is now the upstairs function room. It’s clear, even to someone meeting him for the first time, that Frank is as much a part of the DNA of the pub as anyone to have worked here since it opened.

Frank is a Longford man by birth, hailing from the town of Leegan, and it was as a result of an advert in the Irish Press in the 60’s that got him into the pub trade. He started off in the Glenview Hotel in Wicklow learning his trade. In Kiernan’s pub in Leegan Frank helped Mick Kiernan in bottling the Guinness sold by the pub with a label custom made bearing the name of the brewery and the pub. Frank recollects having to go around the local area picking up bottles that had been discarded by those who bought take out. They then brought the bottles back to the pub to be washed in a vat of water drawn from a local well. It’s not quite the levels of cleanliness we’re accustomed to these days in modern pubs.

From Kildare Frank moved to Dublin, working in The Countess Bar on Townsend Street, The Stillorgan Orchard and The Dropping Well in Milltown. Willie Devitt’s cousin, Andy, was the original connection that initially brought Frank to Devitts following its opening.

Devitts has for a long time been known as a pub where people go to watch and commentate upon sports, and Frank has seen many famous faces come in as regular visitors. In his days in The Dropping Well in Milltown his among the customers that he served were Johnny Giles, Eamon Dunphy, Mick Meegan, and Pat Dunne. Billy Quinn and his Ireland international son Niall were familiar faces to Frank while in Devitts, Billy having known Willie from Tipperary. He also had high praise for boxer Gerry Coleman who would drink on Camden Street.

I asked Frank if he has any favourite customers or famous faces over the years. One man that stood out to him was Irish Press sports writer Con Houlihan, a man he describes as extremely intelligent, extremely tall, and very pleasant. It was a regular occurrence for Houlihan to mention Devitts in his columns in the Press. He recounts one story of when Houlihan was seated at the end of the bar with his feet up on a stool snoring away. That’s a testament to how comfortable Con Houlihan felt at Devitts and several of Dublin’s other top hostelries.

Frank recollects the trade that Devitt’s used to benefit from the nearby Olympic Ballroom that once stood around the corner on Pleasants Street. He recalls Joe Dolan, Dickie Rock, Tom Dunphy, Brendan Boyer and other well known musicians dropping in for a pint. Wednesday and Saturday were the big nights at the Olympic, with Wednesdays being for adults, and Saturdays being the Showband night, with bands like The Hi-Lows, The Miami, The Royal, among others.

The Olympic Ballroom is no longer there and just as the area changed over the years, so too did the pub trade. When Frank first started working in 1968 there were 3 taps, Guinness, Harp, and Smithwicks. Now he says there are 25. There were 2 gins, Cork or Gordons. If someone ordered Gordons it was assumed that they weren’t short of a few bob.

The working hours were considerably different back then too. A typical working day would be 10-2pm, then a break for an hour and a half, then in again until 6 or 6.30, another break, and then back in until close. You’d get 2 days off a week and every second Sunday as well. This was at a time when there were only 4 people working in the bar. For context, there are now 20 or 25 people working in Devitts. It was and likely still is a difficult job to do in terms of unsociable hours for someone with a family.

It was still the case for much of Frank’s career that the ‘holy hour’ was enforced, where the pub would have to be closed from 3-4pm. He remembers it being a bit of a challenge to get people to shift and move out of the bar for a while, no matter how familiar they were with the bizarre law.

I ask Frank if he thinks that working in a pub is less of a trade than it used to be and he seems to think it is, but feels that the customers are still quite discerning when it comes to a pint of stout. He recounts a trip over to Edinburgh to see one of his daughters where he orders a pint of Guinness in a pub. The woman pouring the pint lets it spill over the top of the glass and down the sides. She invites him to take a sup of it so she can top up the head again. “If I gave that to anyone in Devitt’s I’d have it thrown over me!”. Of course Frank is too polite to say this to the woman in the bar.

Another difference in the trade compared to the older days is that the Gardai apparently used to be very strict in terms of closing up time. At closing time Gardai would frequently be in the door at ban-on closing time to shift people on, often going slightly too far in terms of their methods of persuasion.

The pub held a retirement party for Frank last Friday and he was clearly delighted with the turnout of people. He might not have seen some of them in a while but they all showed up to show how appreciative they were of Frank’s hospitality, friendship, and general pleasantness during his time in Devitts. A local woman who Frank would always greet in the morning as he opened up and she walked her dogs was sorry to hear that that was the last time he’d be opening up, wished him well and thanked him for being such a pleasant part of her day. It’ simple interactions like this that give Frank pleasure and there’s no doubt that he’s the type of man who has made everyone’s day a little bit brighter by having talked to him.

I ask Frank if he’ll be coming back to Devitts every now and then to say hello. He will indeed and will no doubt receive a very warm welcome from everyone who knows him, even a little. For now though, he’s off to visit one of his daughters in Edinburgh to watch Hibernian play (someone has already bought him a team scarf). A few hours after we finished talking Frank texted me a mug with his name, and his finishing time in a 10k race from 2017. “I took up running a few years ago to try to get fit. It worked and I like it.” Frank was introduced to running by Brian McConville, a customer in Devitts who organises a running club named Run BMC.

“Frank is the most loyal person I’ve ever worked with”. So says Willie Devitt.

Willie’s daughter, Deirdre, who grew up in the pub and went into the trade said ” Frank was such an important influence to me growing up – so nice, so patient and he taught me a hell of a lot about the trade. He’ll be missed on Camden St (especially his laugh!) but I’m very excited for him as he starts a new chapter that’s not behind the Bar.”

I think they’re sentiments that would be shared by everyone Frank came in contact with.