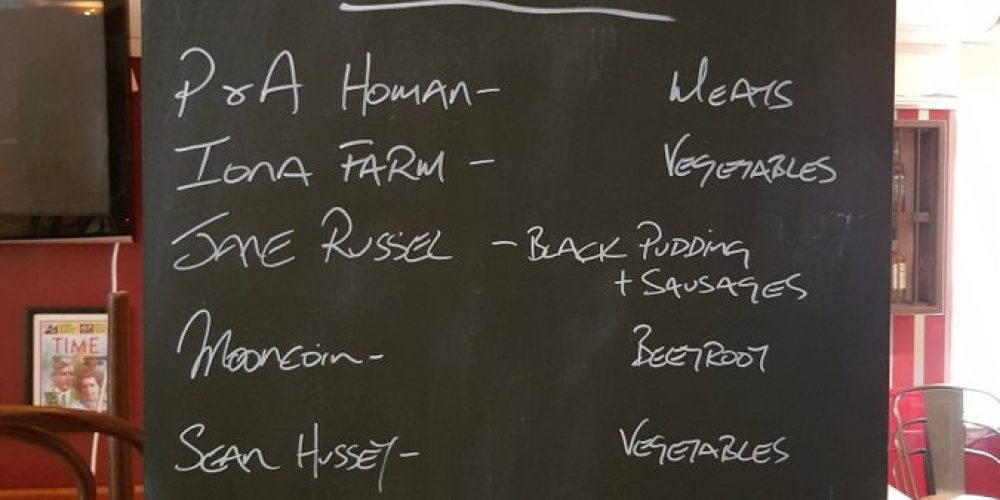 As it’s Black Friday, a newly birthed festival of shopping that is mainly to the benefit of larger commercial operations like amazon, we decided to take a look at a few pubs around the city who take pride in shopping local and ordering from other small businesses operating in the food and drinks trade.

In a time when we’re becoming more discerning about what we eat, where our food comes from, and whether or not the money we spend stays in the local economy, these pubs are great examples of how Irish businesses can thrive and help others do similarly.

What got us thinking about this initially was a tweet by The Bankers on Dame Lane in praise of their long term supplier, Mullingar farm meats. The pair have been doing business for 24 years now and as the pub says, they’ve never been let down once in all that time. The pub was quoting a tweet by the Irish Butchers Guild, which is an organisation that supports and promotes local butchers who provide high quality meats.

Quick to chime in in support of the statement were The Bank Bar around the corner on College Green. This is a pub known for the highest quality food and they’ve have also let it be known that they shop local when it comes to their produce. You only have to look at the menu on their website to learn the local provenance of their dishes, including Gubeen bacon, Wicklow Lamb Shank, and Silverhill Duck.

At a time when some people are opting to eat less meat at home, favouring instead to eat it only as a treat, pubs are providing this option for people so that they can enjoy a higher quality meat where you can really taste the flavour and be assured that the animals were reared in the best conditions possible.

The very first line you’ll see on the website of L Mulligan Grocer in Stoneybatter is ‘ We believe Irish produce is special and worth celebrating.’ Never a truer culinary word was spoken! This pub has been a pioneer in supporting local Irish producers, most famously in the form of their extensive Irish beer and spirit selection.

Their menu has excellent information on where their food comes from, whether it be vegetables or meat and they make sure to mention that their seafood is sustainably sourced from small day boats and family owned fisheries. What’s more, the pub don’t just serve food, they seek to educate people about it. There’s frequent tasting and information events held in Mulligans. For instance, the next such event is the ‘Winter Bounty Dinner Menu‘, which includes a walk around the area for discussions on urban sustainability followed by a long table feast that includes wild game and some of the best their producers have to offer.

57 The Headline on Clanbrassil Street are another pub that take their role in the community very seriously. The pub is a social space for people to connect, but it’s now also somewhere for people to get a better appreciation for the food and drink that they eat. Leading by example, The Headline are showing that Ireland has a rich culture of indigenous food and drink that doesn’t need to be imported and can compete on taste with the cuisines of the world.

They have a chalk board in the main bar proudly displaying where they get their meat, fish, veg, sausages, and beetroot. These are all great success stories of Irish food. From the Sunday roast to the cheese board, everything here is Irish. They’ve even gone so far as to release a beer through 2 Sides Brewing Company called ‘Shop Local’ to encourage people to do just that this Friday and to take that sentiment with them whenever they spend a few quid.