post-title The best pub related clips from the RTE archives.

The best pub related clips from the RTE archives. 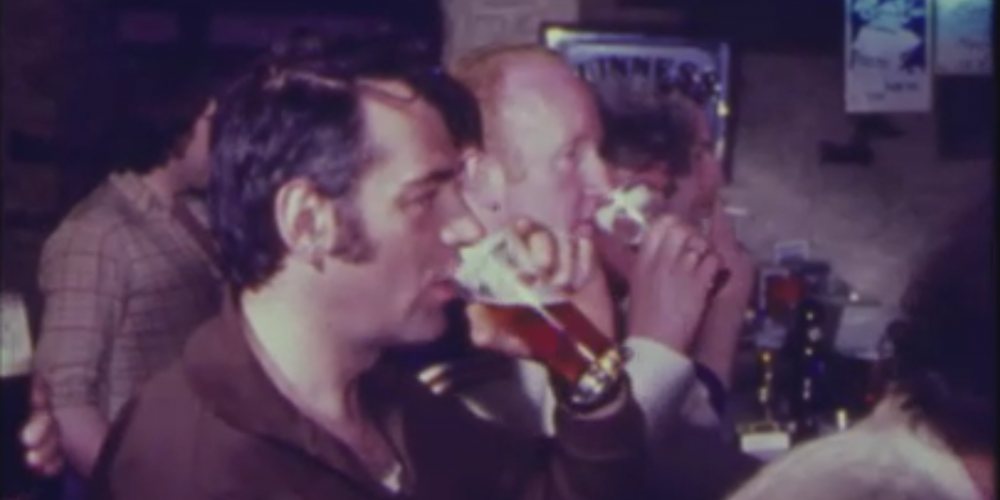 We’re frequently tagged in videos related to pubs released by the RTE archives on their twitter account. They’re a brilliant snap shot into the past and give us rare examples of pub interiors going back to the 1960s.

The videos are all hosted on the RTE site so we can’t embed them here, but we thought we’d put together a list of some of our favourite videos.

There’s so many good videos that this may well be part 1 of a series looking at the clips.

This report delves into the ever changing face of the Dublin pub and in particular women now coming into pubs.

With women drinking in the pub, men needed to improve their manners, and Paddy is unhappy he now has to politely sip his pint rather than drinking it down in two gulps. He frowns upon the distracting effect women clad in mini-skirts have on his male drinking companions. He also somewhat disapproving of young women drinking in pubs.

Lamenting the fact that there is an ever greater selection of drinks in the pub, Paddy finishes by saying “They’d be better off with a pint of stout”.

Pubs featured in this report include Davy Byrnes, Mulligans of Poolbeg Street, and The Bailey.

Today The Palace and McDaids are known as the the old journalist and authors pubs, but The Pearl Bar was once just as important. It was on Fleet street but no longer exists. The report starts with the line “I once saw Brendan Behan belt Patrick Kavanagh”, so that should give you an idea of the pedigree of writer who came here and the type of drinking that was done.

The report features an interview with Maeve Binchy.

The Holy Hour was a period during the day in which pubs had to temporarily close between 2.30 and 3.30.

The Holy Hour was introduced in the 1920s by Justice Minister Kevin O’Higgins in an effort to curtail afternoon drinking by the workforce.

We like this clip because it gives an insight into a pub that is no longer there.

‘The Aviary’, a pub on Canon Street, Dublin’s shortest street, is to be demolished to facilitate road widening works.

Inside ‘The Aviary’ pub men examine birds in cages, while another group of men stand outside on Canon Street.  For many years Dublin’s Bird Market took place in an alley to the rear of the pub.

An RTÉ News report broadcast on 9 June 1963.  This footage is mute.

Footage of this pub can also be found on the superb Larkin Film Unit video archive on youtube.

This report doesn’t related to McDaids on Harry street, but rather to another McDaids formerly of D’Olier Street which was being demolished to make way for office buildings. The report features an interview with the publican, who pulled his first pint in 1916.