post-title Underground Pubs: Rumoured tunnels, crypts and bank vaults. What else lays beneath?

Underground Pubs: Rumoured tunnels, crypts and bank vaults. What else lays beneath? 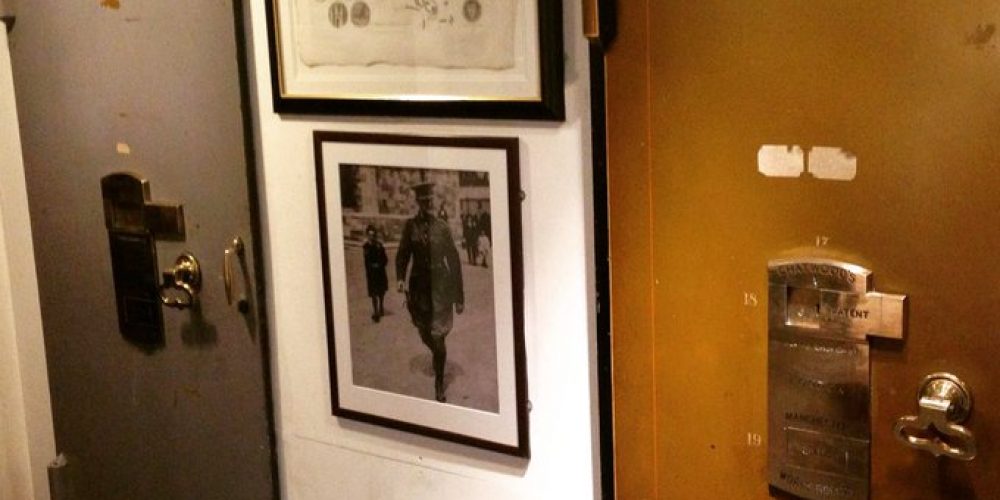 For years and years in Dublin, rumours have persisted that a series of underground tunnels run along Dame Street, near Leinster House, O’Connell Street and various other areas of the city. These rumours are often difficult to verify unless major works are carried out upon buildings, extensive road works are carried out, or like in the case of Dame Street in 2015, a sink hole appears in the street.

One particular type of business that appears on every road of the city and makes use more than others of underground storage, cellarage, and cold rooms is of course the pub. Through stories we’ve gathered over the years we can shed some light on at least some of the underground areas of Dublin.

In the case of the Dame Street sink hole, there were rumours that a mysterious tunnel to a 19th century brothel was what had collapsed underneath the busy road. This may tie in to our first pub with a supposed connection to Dublin’s underground.

In the 1969 book ‘Irish Pubs of Character’ by British pub expert Roy Bulson, the author compiles details of a number of Dublin pubs, including their beer menu, whether they served food, and he always included a brief description of his impression of the premises. For his entry on Leonard’s of Dame Street (which is now Brogans) he included a line about a possible tunnel underneath the pub.

The phrasing would suggest that this tunnel existed during the time of his visit. Or at least this is what he was told at the time. It’s also possible that his reference is done in a playful sort of way, toying with a rumour of myth about the pub.

The rumoured tunnels possibly unearthed by the Dame Street sink hold were said to run from the House of Lords or what is now the bank of Ireland on College Green to several gentleman’s clubs. Brogans as a pub is 200 years old, but there may have been a hostelry of some sort there predating a licensed premises and dating back to the building of these tunnels.

Of course, downstairs in Brogan’s is now occupied by ‘Underdog’, a craft beer pub and no secret tunnels appeared when construction work was taking place there a few years ago. That’s the thing with secret tunnels though…

Switching our attention to the north of the city and to another pub of a similar vintage, Molloy’s on Talbot Street is a pub that retains its Victorian design and heritage and even predates that era in its formation. In 2017 the pub underwent a renovation, which included an exploration by the new owners of an apparent series of tunnels extending well beyond the foundations of the pub itself.

To document the renovations and what was found under the pub they invited in a video production team from ‘Shoeless Foot Productions’. A significant amount of these tunnels were used as stories areas for kegs and the like, but a large amount of them are unused spaces, leading to ever darker areas.

At the end of one such hall there’s an arch with a doorway that is bricked up. The guide in the video says that the rumour is that this tunnel is supposed to stretch down the road to Connolly station. By foot over ground this would be around 150 metres, so it’s not exactly beyond the realms of possibility that this is the case. The bricked up doorway isn’t exactly small either. There’s space for several people or something more bulky to make its way down it.

Back on Dame Street sits one of Dublin’s most impressive looking pubs, The Bank on College Green. As the name would suggest, this was once used as a bank until the early 2000’s before it was bought by the Chalke Group. The building dates back to 1892 when The Belfast Bank had it constructed. We don’t know anything about tunnels running into or away from the pub (indeed this would have been a massive design flaw for a bank!), we do know that underneath the main floor is quite interesting.

From a time when hard money and possessions needed to be kept under lock and key in an extremely secure location, the downstairs of the building had several safes for keeping customers belongings. To ensure that no safe could be removed from the building and its contents stolen, the safes were installed first after the foundations and the rest of the structure was built around them. You can still see some of the safes when paying a visit to the bathrooms downstairs. The main area where the safes and vaults existed is now the kitchen area for the pub. Surely it’s the safest food in Ireland?

The basement area of Toner’s on Baggot Street is another pub that has undergone recent renovation. At the back of this space is a set of new toilets. This area was for years left as it was, a storage area that accumulated items over decades and decades. The area itself runs right underneath the footpath outside on Baggot Street. Of interest to us are 2 items that were found during the clear out process.

The newer of the 2 items was an original album by the Dubliners. The album cover features the band holding pints, standing in front of the snug at the front of the pub. The theory behind why it was in this downstairs area is that the launch for the LP was held in Toner’s pub. The band gave a copy to whoever was behind the bar and they put it in this space to keep it. Nobody touched it for years and it has laid there, unplayed since it was handed over the bar in 1981.

The second artifact is a bit older in age. It was once the case that in the basements of pubs they would hand bottle and hand label the Guinness that was delivered to them. Guinness would sanction a label bearing the name of the brewery and the pub in question. Whenever the pub changed hands, the labels would have to be changed and the publican vetted. Way in the back of this storage area was a bottle filler. It had a hand pump that would fill one bottle at a time. The device remained in remarkably good condition, probably owing to the cold conditions and that it was surrounded by other materials that let less air at it.

Naturally, The Church on Mary Street is a bar brimming with history and this certainly extends to the underground areas too. One thing that sets this bar apart from others mentioned in this article is that these areas are actually open for you to explore. The basement area has recently been transformed into a new look ‘Cellar Bar’ where you can get cocktails and late bites in an atmospheric setting. One area that is of particular interest to us is the crypt space that is accessible from this downstairs bar. You might not even know it exists. After you have entered the Cellar Bar turn right and you’ll be in a short hallway with 2 barred spaces either side. These were 2 of the 6 crypts that once held 32 bodies. Extensive excavation had to be carried out during the conversion of the building to its current use, as these bodies had to be removed and re interred elsewhere.

JW Sweetman is one of the largest pubs in the city, with a total of 4 floors. Well, 4 accessible floors anyway. During a guided tour of the building it was once mentioned to us that below the basement area which is now known as the Blu Room, a private hire space, there are a further 2 floors. These are now apparently inaccessible and were once used to store massive amounts of rope for the docking industry that existed along the Liffey, with the nearby Custom’s House being the main hub for this activity.

2 areas of the downstairs Flanders Rock bar of Bruxelles on Harry Street extend out beyond the main floor areas of the pub. Philomena’s snug, tucked in to the bottom right of the bar goes out onto Harry Street, nearly underneath the statue of Phil Lynott after whose mother the snug got it’s name.

The second is an area behind the bar that opens up to reveal a small beer storage area. This runs underneath the jewelers that neighbours the pub.

Nearly every pub in the city has an underground area used primarily as a cold room where kegs are kept and pumped up into the glasses of the waiting punters, oblivious to what lays underneath their feet. Sometimes a cold room is just a cold room, but sometimes its history and story runs a little bit deeper…