post-title Where did The Long Hall get its name? It might not be as obvious as you think.

Where did The Long Hall get its name? It might not be as obvious as you think. 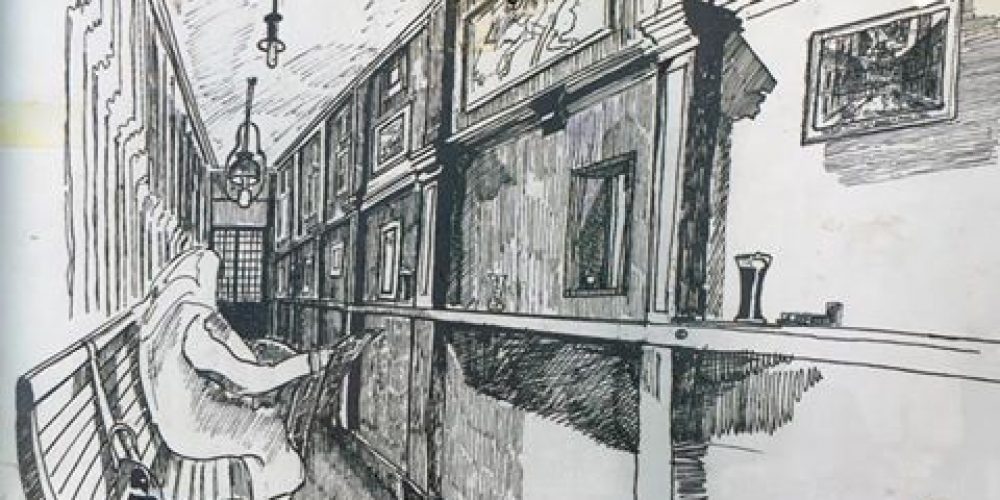 The more frequently you visit a pub and the more used to its name that you get, the less you tend to think about its origins. These days The Hairy Lemon is more commonly known as a pub rather than the Dublin dog catcher that originated the name. We often don’t stop to think about the origins of things.

When thinking about The Long Hall you might be forgiven for thinking that the name comes from the current layout of the pub. There’s a narrow-ish are to the left of the bar which brings you to a more expanded area to the back. This might lead you to assume that this is the hall referred to in the name, but that’s not actually the case.

The name comes from a room that was once part of the pub, running behind the bar area to the right. It was a slender room that ran most of the way down the bar. Luckily for us, we have 2 great examples of what this room used to look like.

The first example is from a sketch posted by The Long Hall a few years ago on social media. It was done by a customer who was sitting the room at the time. The pub described it as follows:

“It’s not the pub. It’s the hallway that ran the length of building behind the front door on the right hand side as you look at our building. It meant you could enter the lounge either through the bar entrance on the left or by walking down the hallway through the door on the right. The hall had a bench seat along its length and hatches in the wall where customers could get the bartenders attention. It was like this until the late 1960s when layout was changed by owners at the time who lived upstairs. This sketch was done in situ at the time by a customer. ”

In the sketch you can see artwork hanging on the walls and a lady sitting down reading the newspaper. This room would likely have functioned in a similar way to snugs in other pubs in the city.

The second example we have of what it looked like comes from a similar room in M.B. Slattery’s pub in Rathmines. Much like the Long Hall there was a main door into the pub and a separate door to the right that lead into this long room. In the case of Slattery’s, as in The Long Hall, the room eventually led into the main area of the pub.

Today, we believe that the door leads to a staircase to rooms above the pub.