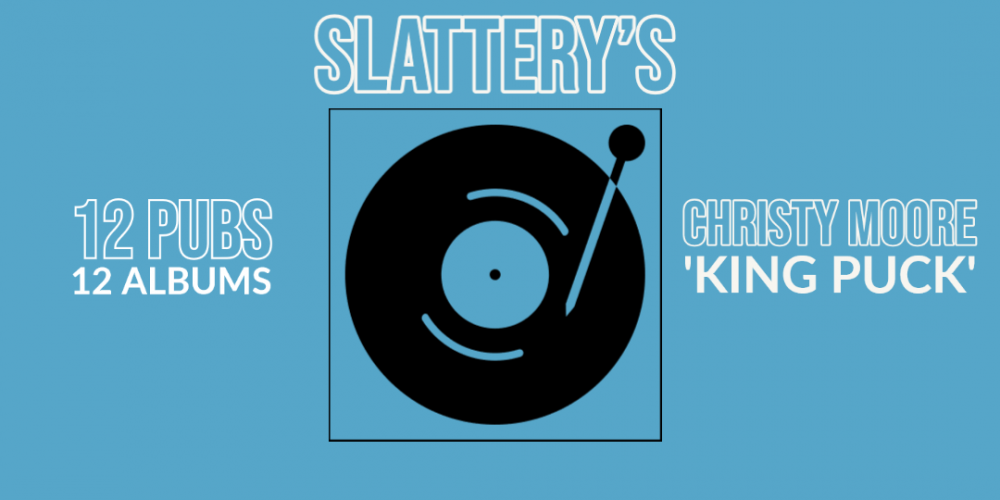 We’ve started a series of articles on connections between musicians from home and abroad and Dublin pubs. As we write the article we listen along to the album. There’s a link at the bottom of the article if you want to listen along too. Some pubs were known to be frequented by certain musicians or in the case of today’s pub, were actually mentioned in a song of theirs.

Christy Moore is one of Ireland’s best known folk musicians and he was no doubt quite familair with a lot of Dublin’s musical pubs. One such pub was Slattery’s on Capel Street, whose doors were graced by some of Ireland’s best musicians including Christy himself and Phil Lynnott among others. The pub was a hub for the folk scene and it was very common for a session to break out both in musical and drinking terms.

Slattery’s on twitter made us aware of a mention that the pub got in a song written by Christy Moore in 1987. The song is called ‘Rose of Tralee/Me and the Rose’. The song follows the classic storytelling narrative of some of Christy’s songs, clocking in at 13 minutes and 17 seconds long. The lyrics featuring the pub go as follows:

There we were Cruisin’ down Capel Street in the White Squad
Looking for the Early Morning House
Will ye look Rose There’s Paddy Slattery.
‘You’re welcome home, Christy’, says Paddy
Big Slate!
‘I suppose you and your girlfriend are looking for a drink’
Well, off came the cap.

She flung it into the back seat of the squad
And in with her like a bat out a hell (left right, left right)
‘I’ll have a Brandy with a small drop of Port I never drink pints when I’m on duty’
Brandy and Port!
T’was like throwin’ water into a barrel of sawdust
She lowered it up and of course……….No wallet
Roll on the Holy Hour’, says I
I’ll see you tonight sez she ’twill be my twist’

The song makes mention of Paddy Slattery from whose family the pub got it’s name. It still bears that name today. You can read more about the history of the pub on their website.

Here’s a link to the full lyrics if you want to follow along. One his website, Christy put in some notes on the origins of the song.

I wrote this song for the Eurovision song contest circa 1987.I got fitted out for the suit and syrup, Louis was to groom me but stood me up,Jim Hand(R.I.P) gave me some tips on Euro protocol but it was all in vain..I never even got the courtesy of a rejection slip.Subsequently I finally managed to record my meister opus on the album KING PUCK but it was written for the big occasion and never took off as it should have done. I heard a report that it was played on the wireless once but I’ve never had that fact confirmed.

Christy was a frequent player in Slatterys, even having a residency with what went on to become Planxty upstairs in the ‘The Mug’s Gig’ in Slattery’s in the 1970’s.

The song appeared on the 1993 album ‘King Puck’. You can listen to it on spotify.