post-title Ever heard of a pub game called ‘Bagatelle’? Well there’s a pub where you can play the pool-like game.

Ever heard of a pub game called ‘Bagatelle’? Well there’s a pub where you can play the pool-like game. 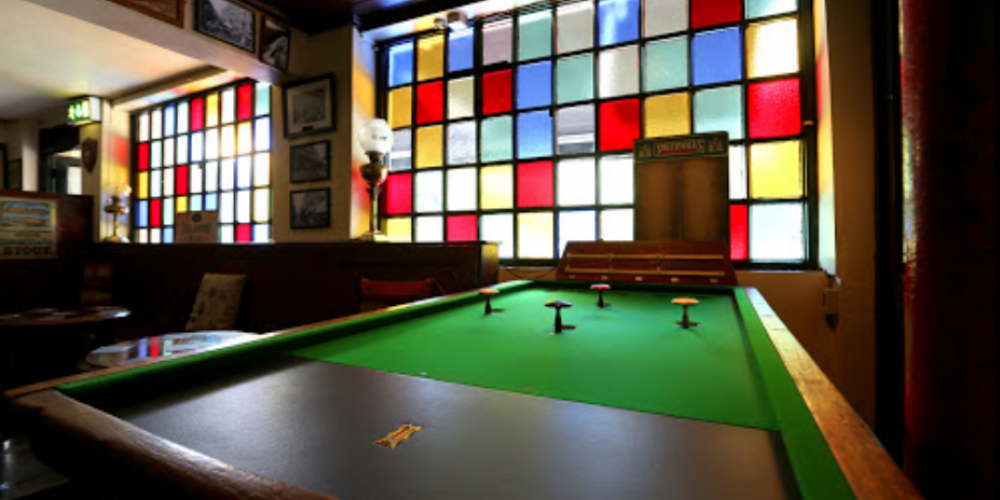 Have you ever heard of Bagatelle? It’s a table top game derived from boules where the object of the game is to get a number of balls past wooden pins into holes that are guarded by wooden pegs. Penalties are incurred if the pegs are knocked over.

Now, obviously we’ve looked up the broad strokes of the rules on wikipedia but the actual playing of the game is beyond us. Like many, to us Bagatelle was the name of a band, famous for the song ‘Summer in Dublin’. They retain their popularity to this day, still gigging and hogging the front page of google’s search rankings when you search the word while looking for details on the game.

What is of interest to us is that there happens to be a Bagatelle table in the Strawberry Hall pub in the Strawberry Beds along the banks of the Liffey. The Straw Hall is a smashing traditional pub with space outdoors for sitting and they now have a pizza truck out front for those who arrive after a walk or a cycle looking for some nourishment. If you haven’t been before, it’s well worth searching out and making a day of it. Back to the games…

Sporting entertainment in pubs comes usually in the form of a pool table, darts, or in the case of The Back Page in Phibsboro, crazy golf. The Straw Hall is unique (as far as we are aware) in the county of Dublin for still having a Bagatelle table. It seems to have enjoyed a degree of popularity in the 70’s in Ireland before fading away. It’s certainly a real point of interest for us and probably for anyone who enjoys spending a day in the pub learning and playing a reasonably elaborate new game.

The table looks almost antique, like an old cigarette machine where you’d pull on a wooden knob to release a packet. But the table is in good knick and even if it’s not in use, provides an ornamental quality to the room.

We’re sure that if it’s not too busy, there might be someone on hand to give you a few pointers on how to play. In 2016 at least there was a Bagatelle tournament every Tuesday in the pub where you could learn to play and compete. We’re not sure if it’s still going today, but you could always get a few friends together for a mini tournament.