post-title From Nenagh to Rathmines. How a long forgotten Tipp pub was moved to Dublin.

From Nenagh to Rathmines. How a long forgotten Tipp pub was moved to Dublin. 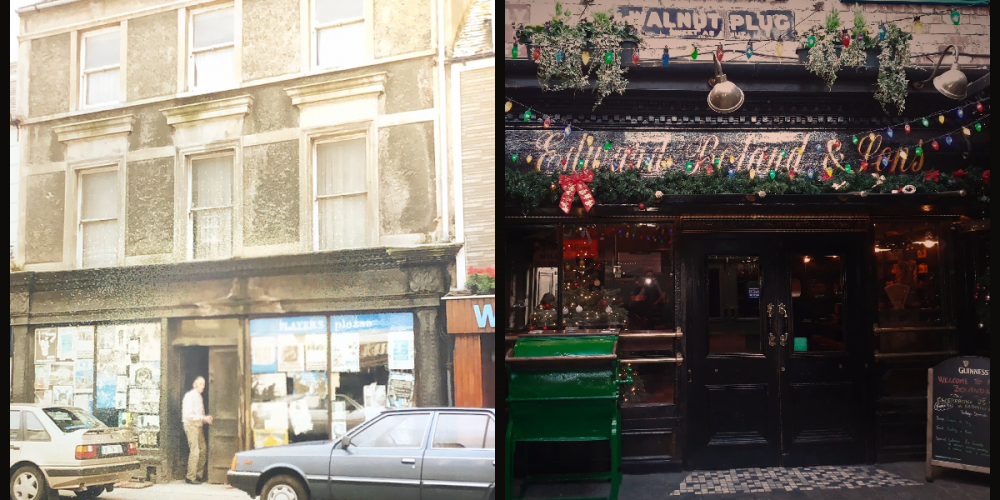 You might be forgiven for thinking, as we did for many years, that Rody (pronounced ‘Roadie’) Boland’s pub in Rathmines was named after the current owner or comes from a previous owner on the same location. The real story however is much more complicated than that. Not only is the pub named after a man who is not the owner, it also takes it’s name from a pub that once existed long long ago on Queen Street in Nenagh, County Tipperary.

It’s not uncommon for closed pubs to be broken down and its parts sold off, moving to other pubs around Ireland. In fact, there’s numerous occasions where near-whole pubs have been deconstructed and moved abroad, recreating the Irish aesthetic for a foreign audience. In the case of Rody Boland’s in Rathmines, various parts of this expansive pub were taken from it’s near namesake in Nenagh, a pub that closed it’s doors in the 1930’s during an economic downturn in the region. The pub was established in 1873 by the McMahon family (whose monogram is still visible on the front of the bar today) from County Clare, before coming into the possession of Edward Boland and taking his name in around 1900. Apparently the pub did a very good trade during the time it was open. Ledgers from the early 20th century are kept in pristine condition in the new incarnation of the pub, documenting who owed what, their purchase history, and whether bills had been settled at the time of the pubs closing. The documents included their address, townland, and sometimes profession. Regular and known customers appeared to have been given leeway when paying, allowed to accrue credit, paying when they received their wages or were able. It’s likely that any Tipperary native could look through these ledgers and recognise some of the names of descendants of theirs or those of their neighbours.

When Kieran O’Meara took over the pub in 1993 he had a clear vision for what he wanted the pub to look like. As an apprentice, Kieran came to Dublin at the age of 14, put on a bus to learn the trade as so may young men from Tipperary did in those days. He worked his was up the ladder, managing, opening and owning several pubs along the way.

Prior to taking it over, the pub was named ‘Streets’, which certainly conjures up a different image than the rural pub come sports bar that exists there today. Kieran remembered the facade of Boland’s pub from his hometown and always saw it as the archetype of what a traditional pub was. When the opportunity presented itself to put to good use that which had fallen into disrepair and disuse, Kieran took the initiative to give the old Nenagh pub a new lease of life.

While many of the ‘artefacts’ from the pub were in good condition, the pub itself appears to have become a dusty museum where elements of it were kept as they were simply because they were never moved. Photographs of the inside of the pub from when it was cleared show a setting that is equal parts storage room and early century town pub.

There is a double entrance to the pub, with a street facing facade that will be familiar to anyone who passes by on a regular basis. Behind that is a second entrance that was taken from the front of the original Rody’s. To fit it’s new home, the front was slightly cut to size but the wood and design is still all entirely original. The doors of the pub were slightly too large to be kept in their original position so they now take up a decorative place on the walls in the smoking area between the two entrances. In this area there’s also a painted mural of Mister Boland himself. The O’Meara’s took it upon themselves to commission the photo in tribute as there existed no photographs of decent quality to hang in a prominent position. Rody is wearing a beret style cap and behind him is a copy of An Phbolacht, an Irish Republican newspaper that he used to sell in the pubs of Nenagh and elsewhere.

Although the pub closed in 1930, it was still occupied and used by Rody Boland himself. He lived above the pub for his whole life, being custodian of the building and keeping it practically untouched, including the front bar. Keeping the front bar untouched wasn’t as a result of Rody’s careful preservation work but rather because the whole front was painted in tar in 1926, preserving it perfectly for decades.

Inside the front door you can immediately see three elements from the original pub; the bar, the shelving, and the snug, albeit reordered somewhat. In the shelving behind the bar there are still the original drawers that once held tea leaves, spices, and other goods sold in the pub. In fact, if you put your nose into the drawers you can still get a whiff of some of the old spice aromas, long since disintegrated into the wood. In the shelves beside the drawers are some of the collection of original pub ledgers, some approximately 100 years old at this stage. We were fortunate to be able to flick through the pages, seeing the care and penmanship taken by the note taker who happened to have been a relative of Kieran O’Meara.

The new recreation of the snug is somewhat different than the original. One wall of the snug has been removed and used elsewhere in the pub, leaving a three wall and one door snug attached to the bar. It’s a great creation and is certainly to our knowledge unique in its design compared to other snugs of the city.

Today the pub is run by Kieran and his son Brian, just as Edward and Rody had run the pub in Nenagh before them. In it’s current form, Rody Boland’s is quite a vast pub with a large main bar area, a section to the back and a large upstairs with another bar, lots of seating and a huge projector screen. Although large, it’s a hospitable place known primarily for being a sporting pub, displaying historical keepsakes from hurling, soccer, rugby, and just about every other pursuit. You could endlessly stroll around the pub looking at trophies, balls, and advertisements from matches long past, as well as musical instruments, bric a brac, old documents about the pub, and advertisements from the Titanic. The visual stimulus in this pub doesn’t come solely from the tv screens. On the wall above the staircase that leads upstairs is an imposing stained glass work that somewhat cryptically depicts 12 or so sports. Take a few minutes and see if you can spot them all.

The reclaimed elements of a long disused pub have been repurposed and put to good use, ensuring that craftsmanship and heritage has been preserved for future generations to enjoy. It’s extraordinary that a pub that closed in the 30’s could be untouched for so long that it was still usable in the 1990’s. Aside from the physical protections created, the family stories of the McMahon’s, The Boland’s, and now the O’Meara’s are now certain to live on, and their contribution to the communities of Nenagh and Rathmines celebrated for many years more to come.