post-title Havin’ Olaf. Dublin pubs that pay homage to the cities’ Viking past.

Havin’ Olaf. Dublin pubs that pay homage to the cities’ Viking past. 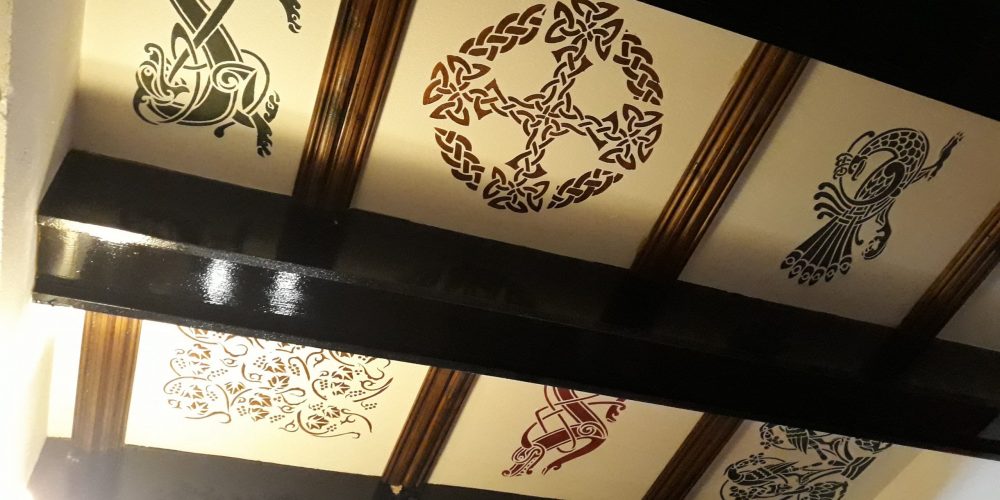 Dublin has gone under many names during it’s existence, from the Latin ‘Eblana’ to the more gaeilic ‘Duibhlinn’. It’s Norse or Viking name was ‘Dyflin’.

In terms of the interiors of Dublin pubs, we’re used to seeing iconography that depicts our connection with brewing and distilling, Ireland’s revolutionary past, and the great Irish writers of the 19th and 20th century. Seldom do pubs look a bit further back into our history to tell the story of the city through design elements that reflect the various peoples and traditions that have inhabited the city. However, we have noticed a few pubs that pay significant homage to the cities’ Viking past.

Upstairs in The Boars Head is the lounge area, used for watching sports games, for party bookings, or generally a place to have a drink when downstairs is at capacity. The room follows a distinctly Viking theme. Even the name of the pub conjures up thoughts of a medieval tavern from a time when pub signs depicted something easily describable since the populace were largely illiterate.

The designs and depictions on the walls appear to show both the early Christian and Viking traditions coming together, with some images looking like they came straight from the book of Kells. One great feature are the light fixtures that resemble a Viking drinking horn.

I can’t say enough good things about this pub. A welcoming atmosphere, a lovely pint, and some of nicest design I’ve seen. The interior of The King’s Inn could said to be a coming together of medieval and Viking Dublin. The single seats and pew-like seating are curved in such a way to remind you of a modest wooden throne that you can imagine a Viking King and Queen sitting upon.

The ceiling is decorated in a series of animalistic, floral, and Christian motifs. Some of the panels look like the ornaments that featured at the bow of a Viking rowing ship. To some people’s eyes, it may be more medieval than Viking (especially because of the suit of armour), but we think there’s certainly some earlier influences in there too.

There has been a pub on the site of this Temple Bar pub since the 1500’s, so it wasn’t an awful long time (relatively speaking) between the Viking settlements of the 10th century and the opening of this spot. The pub back then was called ‘The Wooden Man Tavern’, taking it’s name from a wooden Viking figure on the corner of the street. Located as it is very close to Wood Quay, it’s not exactly unlikely that there might be some Viking artifacts under the building if you were to dig deep enough.

Of course the name of the pub is a reference to Dublin’s past, and the pub’s logo plays with Norse artwork, with the capitalised N taking the form of the ornament on a the bow of a Viking longboat.

Brannigan’s on Cathedral Street have a design that makes you think of either a Viking dining hall, with two pointed arches that put you in mind of both a helmet and a long boat. There are also accompanying swords and shields. While the crested shields might not exactly fit the general Viking aesthetic, they’re no doubt there to symbolise the fighting nature of the Viking settlers.

There’s few pubs in Dublin that can compete with The Brazen Head in terms of history and heritage. They date a hostelry on the site of the pub back to 1198, a time when the Viking influence could still be felt. It was also located at the heart of the earliest settlements. Indeed, Father Matthew Bridge as it is now was the first crossing point of the Liffey and the pub is located a few yards away from it. Link.

Upstairs in Connolly’s pub in Clontarf is a theatre that goes by the name ‘The Viking Theatre’. Of course Clontarf was in 1014 the location for a huge battle between Brian Boru, the high king of Ireland, and a Norse-Irish alliance. It’s fitting that a pub with so much pride in its part in local history should pay homage to other, older traditions as well.

The Thing Mote was a pub on Suffolk Street that now goes by the name of O’Donoghue’s. The name makes reference to Ireland’s Viking past. The Thingmote was a raised mound that existed in the general vicinity of the pub until 1685. It was an assembly point of Dublin’s Vikings where they gathered to make laws and debate. The mound was removed and the land used to build up what is now Nassau Street.

Gone only 2 years now this pub is missed by a lot of people who enjoyed its multi level and sometimes discombobulating layout. The pub was named after a nearby Viking pillar which was constructed in the 10th or 11th century to stop Viking ships from running aground at a time when the banks of the Liffey were not as defined as they are now. It was removed before 1750 and then a replica took it’s place in 1986 which depicted Ivar, a 9th century ruler of Dublin.

The pub also had an impressive feature in the the shape of a giant head which was that of the Norse god Odin. Within the mouth of Odin was a fireplace.

The Viking was a pub on Dame Street during the period 1979 to 1987 and has been credited with possibly being Dublin’s first gay bar. Our friends at the Come Here To Me blog have done a great job recounting the history of the bar, so we suggest visiting their site for further reading.