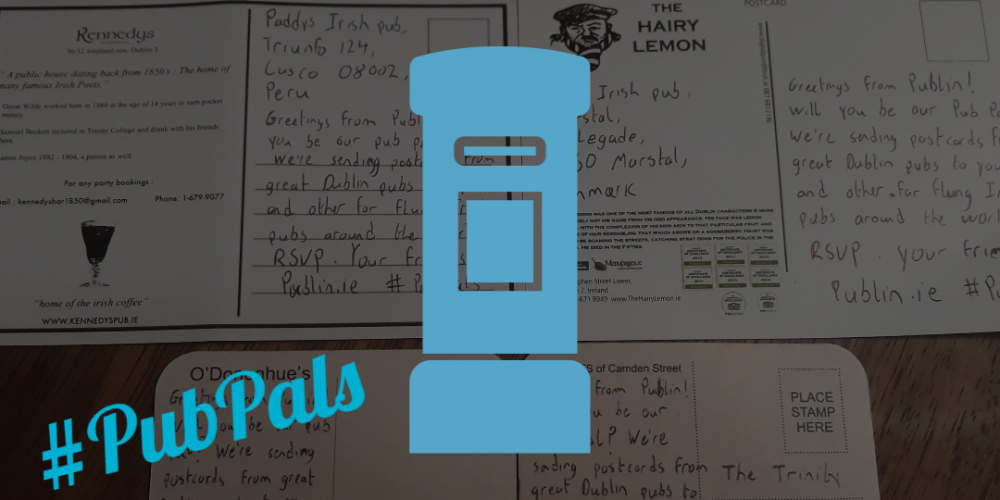 In recent years pubs have become more inventive with the in-house marketing. One example of this is the humble beer mat. Once used to slop up spills and level wobbly tables, it’s now being put to a double use of being a postcard that you can write on and send wherever you like as a kind of ‘wish you were here’ for people at home and abroad.

We’ve noticed that several pubs have either these beer mats or a regular postcard with an image of the pub on the face. We’ve been collecting them here and there these last few years so we decided it might be time to put them to good use. So, here’s the jist of what we’ve done. Given that our third biggest export after our peeople and Guinness is pubs, we thought it might be a nice idea to send postcards from pubs to pubs. We’ve asked people on social media to give us examples of some of the more remote locations for Irish pubs around the world.

We’ve taken 4 postcards from Dublin pubs, 4 of these crowd sourced suggestions and matched them together for what we’re calling ‘Pub Pals’. We’re writing to each of these pubs asking them to be our pub pal and to send us a response. As there’s minimal room on a postcard to request what we’re looking for from them, we’re just going to leave it up to their creativity. Maybe upon receipt of the postcard they’ll google Publin and pub pals, come across this article and think of a way to respond.

We’re trying to include as many pubs as we can in the process, from inception to posting. We came up with the idea in Tommy O’Gara’s of Stoneybatter, we wrote the content of the postcards in Doheny and Nesbitts on Baggot Street, we addressed them over a toastie in The Palace Bar, and you can read where we posted them after this run down of which Dublin pubs and their postcards were paired with which pubs across the world.

Just before you see the postcards, we’d like to warn you of our atrocious penmanship.

‘Devitt’s’ of Camden Street and ‘The Trinity’ of Vladivostock, Russia.

This pub exists at Everest base camp and was the most suggested pub on social media when we asked for ideas.

We’re told that this is the highest Irish pub in the world.

This pub exists on an island in the Danish archipelago.

Luckily we also had the opportunity to involve another pub in the process. In the outdoor area of Ned O’Shea’s is a postbox where they encourage people who are here on their holidays to send cards and letters home. We took the opportunity to post out cars from this box.

So, maybe we’ll get an answer back from some, maybe them all, or maybe none! Hopefully the postcards make their way to the pubs safely and in good time. There’s definitely more pubs out there with postcards, so we’ll start making plans for round 2. If you’re any suggestions for pubs in Dublin and abroad , we’re all ears. publinie@gmail.com