post-title Pubs for an excellent whiskey experience in Dublin

Pubs for an excellent whiskey experience in Dublin 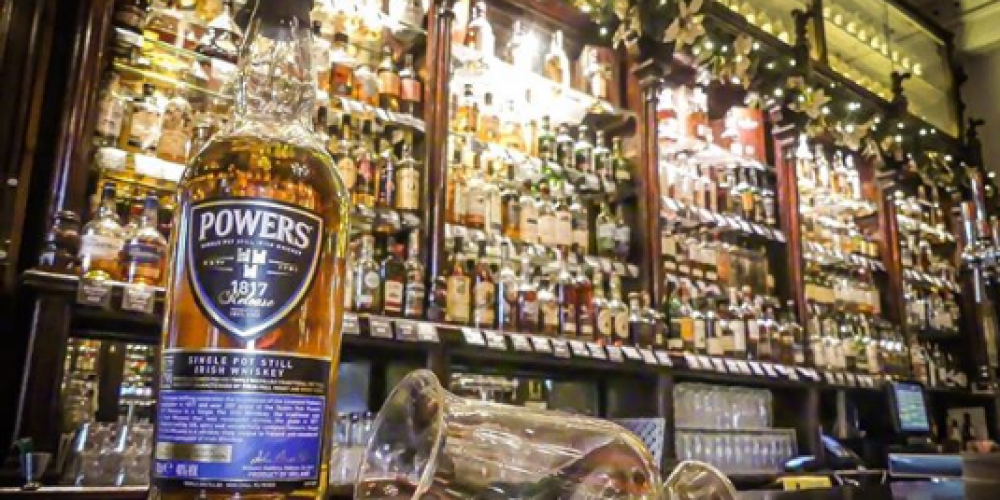 Irish whiskey is undergoing somewhat of a rebirth at the moment with exports of the spirit going up year on year. Here at home it’s equally popular and Dublin’s pubs are throwing their weight behind it, proving that they’re one of the best industries in terms of supporting local producers.

We’ve picked just a few pubs that are worth visiting for an excellent whiskey experience. The experience takes into account setting, range of whiskey, and sometimes even the opportunity to drink whiskey commissioned by the pub.

This is not an exhaustive list and there are surely plenty of pubs out there with excellent whiskey offerings. We just wanted to highlight a few in this list.

You might be familiar with The Palace on Fleet Street, a grand old Victorian era bar with deep connections to Ireland’s literary and sporting world’s. But, were you aware that upstairs above the main bar is another room called ‘The Whiskey Palace’? This room was once the living room and kitchen areas for the Aherne family (who still own the pub) when they first bought the pub in the 1940’s.

The room, as the name may suggest, is dedicated to the serving of whiskey from their extensive range. The walls are decorated by bottles of notable whiskeys, including their own palace bar whiskey. They’ve been steadily building up an impressive selection of Irish whiskey here and the setting makes it a comfortable and warm spot to try a selection of some of Ireland’s finest. The Palace bar recently launched their very own Green Spot whiskey, making them the first bar in the world to hold such a distinction.

Go to the back room of Devitt’s pub on Camden Street and you’ll see why this place deserves its spot on this list. Along the walls of this room are whiskey lockers containing private bottles under lock and key owned by regulars who regard having a drop in Devitt’s so highly that they want to make a ceremony of it.

Drinking whiskey can conjure up notions of an overly serene setting beside a log fire, but whiskey is also for drinking after a nice meal, while listening to trad music sessions, or watching a GAA game. Devitts provides the whiskey and the setting to enjoy all of these pursuits.

Of all the whiskey and spirit displays behind bars in the city of Dublin, Searson’s has one of the most ornate and well presented. Atop one of the doorways is a miniature copper pot still under which is an engraved plaque reading ‘all good whiskey is a gift from god’. That should tell you all you need to know about their reverence for Irish whiskey.

They have a range of over 90 Irish whiskeys that is ever expanding. You can check some of them out on their instagram which features regular posts about their favourite Irish whiskeys, including wonderful photos and tasting notes. They certainly know their stuff here. Maybe take your drop into the snug area and savour the moment.

Welcome to a pub where drinking fine whiskey comes so naturally that even Bruce Springsteen has his own private bottle on the shelf (yes that’s true). This pub is 253 years old and has been selling Powers whiskey since the year that distillery was founded. That’s how long back this pub’s whiskey heritage stretches.

On the 250th birthday of the pub a whiskey was created by the Powers master blender to mark this quarter century in the trade. You can still get a measure of this whiskey to taste a little bit of history. They also have a rotating whiskey of the month selection if you would like a bit of guidance from the staff. Pick a red leather seat, pick a whiskey and take in the history that exists around you.

Bowes on Fleet Street is, like The Palace and The Long Hall, a surviving Victorian era pub, retaining all the hallmarks of that period of design, including dividers and the snug. For years Bowes has been known as a pub that is a desirable location to try some old whiskeys, both in terms of the setting and the selection available here.

Scan behind the bar and you’ll see a diverse range of whiskey. Look in the snug and you’ll see a map of the world, celebrating its various whiskey making traditions. Bowes is another pub to have taken the plunge and have teamed up with a Cork distillery.

The Bankers is a pub that does a good trade with locals and tourists alike. What better place to introduce visitors and convert them to Irish whiskey in a setting that is clearly approved of by Dubliner’s in its authenticity. The pub has been building up its whiskey selection from good pouring whiskeys to higher end 15 year aged red spot, and other indigenous offerings.

One feature of this pub that we really like are the whiskey lockers above the wall as you walk in. In these lockers are bottles of whiskey with the names of local Dublin pubs on it. Each of these pubs have cards behind their own bar that they can give out if they want to send particularly pleasant visiting customers down to the Bankers. It’s a way or recommending another good pub during their stay in Dublin. These guests hand the card into the bar at the Bankers and they’ll get a measure of whiskey taken from the bottle in the locker on the house.

If this doesn’t give you a good impression of Irish whiskey and Irish hospitality then I don’t know what will.

In the back bar of Doheny and Nesbitt on Baggot Street have a section dedicated entirely to whiskey. It’s called the ‘Whiskey Corner’. While the corner is small, the menu is anything but. On their website is a 38 page Irish whiskey menu that expands upon the history of the pub, how whiskey is to be tasted and appreciated, as well as dozens and dozens of whiskeys that are available behind the bar.

The pub provides not only an opportunity to taste these fine whiskeys, but they also encourage you to learn about what you’re drinking. This is another pub that can provide a range of options in terms of how you like to consume your whiskey. Enjoy it in peace and solitude in one of their 4 snugs, at the counter at the whiskey corner, or in the bar observing a rugby match or listening to some live music at the weekend.