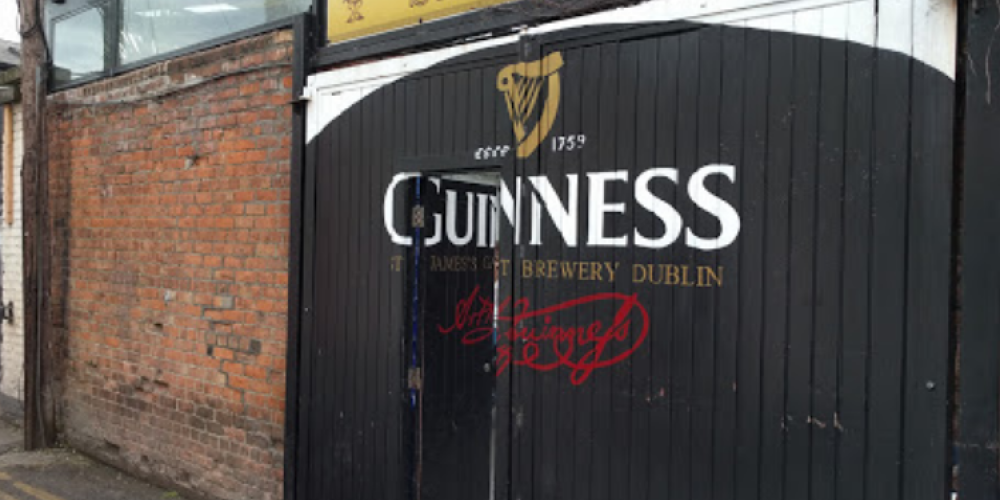 We’ve noticed a few pubs around town paying tribute to pints of the black stuff through their own painting and design inside and outside pubs. It’s frequent for pubs to have old Guinness paraphernalia, but a few have gone a little further by creating depicitions of the iconic gates to James’ Gate Brewery,

Outside The Bankers bar on Dame Lane there’s a large mural declaring the pub to be a good place for Guinness. The motif continues inside in the back area of the pub. The curvature of the ceiling gives the impression of the curved gates at the brewery, and there’s a reproduction from the Guinness archives of a Guinness worker checking the quality of a barrel.

At the back entrance to Searson’s on Baggot Lane you can walk through a recreation of the hallowed gates and step into a lovely covered outdoor area and get a mighty pint of the black stuff.

Not only does Ned O’Shea’s on Lower Bridge Street have a large replica of the Guinness gates, but they also have a replica of a pint directly above it too.

A bit smaller in scale to the others (and currently decorated with a covid sign), but still flying the flag. Peadar Brown’s on Clanbrassil Street isn’t all that far from the brewery itself and there’s many a pint poured when their music sessions are on the go.