post-title Pubs to watch the 6 Nations with food (south side).

Pubs to watch the 6 Nations with food (south side). 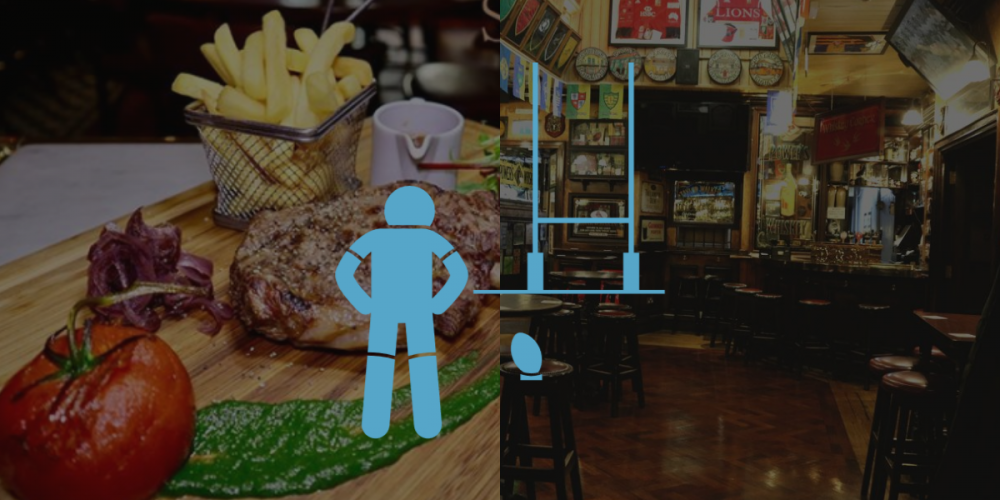 It’s not just the pints that draw people into a pub these days and a full day of sports requires a full belly to go with it. We’ve picked out some great spots dotted around the south of the city to get a good feed and watch the 6 Nations action. For those looking for pubs on the north side, we’ve made a list for that too.

Some of these pubs will be a first come, first serve basis, but some take bookings, so you might want to plan ahead.

McGrattan’s on Fitzwilliam Lane just off Baggot Street is a traditional but large pub. There’s several areas for you to go to watch matches, especially 6 nations with a seat, some food, and screens. At the front of the bar there’s several high tables with good views of the screen above the fireplace and room for a few plates. There’s hearty pub grub in the form of stews, burgers, and fish and chips as well as salad options and sandwiches.

There’s a large projector screen and another bar at the back of the pub with more seating. They serve all day, so it’s a good place for grub for evening or lunch time fixtures. Menu.

Lemon and Duke off Grafton Street have the distinction of being part owned by some current and former Irish rugby players. Jamie Heaslip and Rob Kearney took part in a 6 Nations preview there last week, sharing their insights on how they thought Ireland would fare. Of course they were encouraging the crowd to book in for a feed and drinks to watch the match here. There’s quite a lot of seating, as well as several screens. At the back of the bar is a large projector screen, visible from most parts of the bar. In their snug area there’s a large TV and a good bit of seating. They serve breakfast, brunch, lunch, and an evening a la carte here, so there’s plenty of options at all times of the day. Menu’s.

The Bankers on Dame Lane has always been a favourite of ours for a spot of grub and a match. There’s screens in several locations around the bar, so all seats are covered for a view. It’s a good extensive menu here with pub grub options and the portions are quite generous. If you’re feeling like you need a hearty and warm meal to see you through the day, try the stew.

The 51 on Haddington Road will be familiar with anyone who comes to the Aviva from the general Baggot Street direction. It’s a favourite on match days whether Ireland are playing home or away. They do an excellent meal deal for €14, which includes a main course and a pint. This deal runs on Friday’s 5-9pm and 1-9pm on Saturday’s. There’s lots of seating in here and plenty of big TV’s. Menu.

The Barge is a good, large option if you want that big pub atmosphere, sharing the action with plenty of other fans. They do a burger and pint match day special here for €15, or you can select from their all day menu, which features BBQ options like ribs, fish options like chowder, and even a roast option. There’s always the old match favourite of chicken wings with a pint of their Sweetman’s craft beers. Menu.

You just have to look at the walls of the back bar of Doheny and Nesbitt to see that they’re very much a rugby supporting pub. There’s flags, paraphernalia and framed jerseys surrounding the big screens TV’s. There’s low and high seating here with multiple TV’s to choose from. For lunch they do panini’s, baked potatoes, wraps, salads, sandwiches, as well as steaks and pies. It’s safe to say most tastes are covered.

Sweetman’s on the south quays have it all when it comes to a match day experience; multiple floors to choose from, lots of TV’s, seating for big and small groups, and a very good food menu. They do match day specials such as a pint of any Sweetman craft beer (5 to choose from) plus wings, or a pulled pork bap for €12. They also have a wider menu including Irish favourites like stew and coddle, as well as steaks, burgers, roasts, pizzas, and more. Menu.

Searson’s on Baggot Street fly the flags of the competing 6 Nations for the duration of the tournament. It doubles as a good pub for people on the way to the stadium or those who want to watch the match on a screen. It’s a very large pub with a big capacity for dining and watching. The food here is of a very high quality and the lunch menu includes rib of beef, leek and wild mushroom risotto, a catch of the day, crispy Asian duck and options like burgers and sandwiches. Menu.

A second pub on this list owned by several current and former Irish internationals, The Bridge draws a crowd on match days for the Aviva and the RDS. They’ve plenty of screens for sure, the rugby pedigree, and good menu’s for matches at all times of the day. Menu.

The Headline is known more for its craft beer than its sport offering but they do have a track record of showing Irish rugby matches when they’re on. Here you’ll find an extensive Irish craft beer offering, as well as locally sourced Irish food options. They have small plates that are good for snacking during a match like wings and calamari, or for dishes with more substance they have Jane Russell sausages, fish pie, and steak. Menu.

The Camden on Camden Street is Dublin’s newest sports bar and it really is a sight to behold. We stopped counting at 30 televisions when we were walking around on our first trip. There’s so many of them and the projector screen at the back of the bar must be the biggest in the country. The menu is extensive, and while it includes sports fans favourite meals like wings and nachos, there’s much more than just that. Menu.