post-title The 6 Nations trophy is on tour in some great Dublin pubs.

The 6 Nations trophy is on tour in some great Dublin pubs. 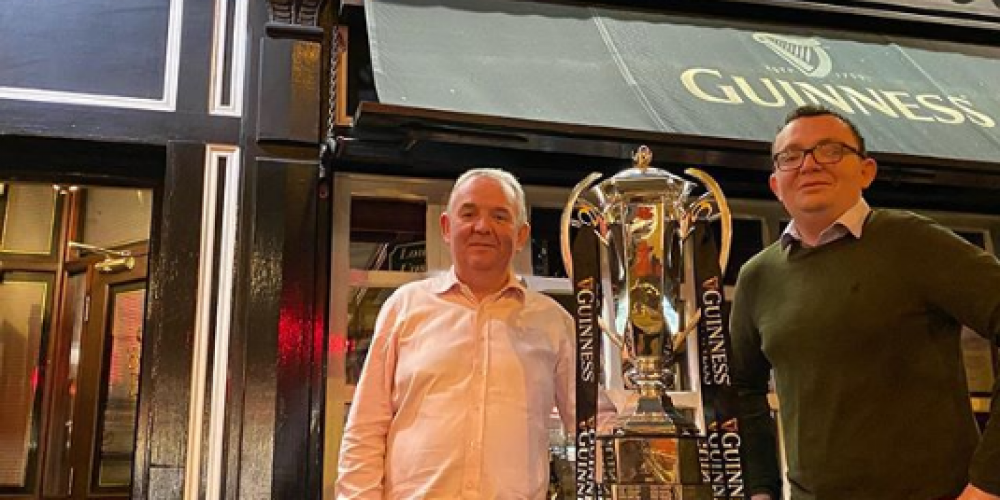 It’s a nice opportunity for fans to get a picture taken with the trophy in one of the pubs where they’ve watched Ireland triumph (and maybe not) in the past. The 6 Nations is sponsored by Guinness, so it’s only fitting that they make sure that the capital’s pubs are celebrated as well as the rugby.

Hugh and Ronan Hourican have played host to some huge sporting celebrations over the years, including Shane Lowry’s Master’s win and of course Dublin GAA’s annual post All-Ireland Final pilgrimage, so what’s one more major sporting trophy to grace the doors of this smashing pub.

The team in Lemon and Duke held a 6 Nations preview a few weeks back where the trophy was present. Lots of people (ourselves included) took the opportunity to have our photo taken with the trophy. Lemon and Duke took the photo to the next level by getting it printed on a pint of Guinness as well! The pub is of course part owned by several current and former Irish internationals Jamie Heaslip, Rob and Dave Kearney, and Sean O’Brien.

It’s fitting that the trophy should make a stop in The Swan given that owner Sean Lynch played in the tournament. His son Ronan (the current proprietor) and the staff are seen here getting a photo taken with it.

Slattery’s have been there for Irish rugby for all over the early starting games in the wee hours at tournaments in far flung places, feeding punters good breakfasts as they dare to hope for Irish success. It’s only right that they get to touch the trophy after that.

The beer garden in Toner’s is always rocking before and during a game as fans make their way to the stadium or drop in to watch the action on their screens.

See how busy it can get in this pub on a home Ireland game. Fans from the opposing teams will flock here for a bit of live music after the game. It’s a great atmosphere.

Other pubs to get a visit (But we don’t have photos):