post-title The weird, the vague, and the questionable. Interesting stories behind the strangely named pubs of yesteryear.

The weird, the vague, and the questionable. Interesting stories behind the strangely named pubs of yesteryear. 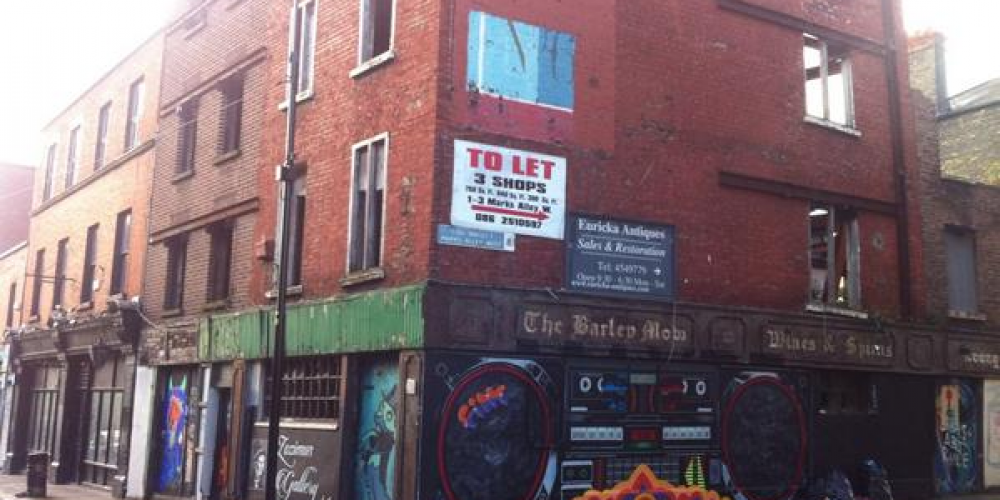 Last week we asked for some suggestions for strange or interestingly named pubs of Dublin’s past. This is just a small selection of some of the suggestions and others that we’ve come across over the years.

Before the Ouzel Galley was a pub, it was a boat that set sail from Ringsend in 1695 for the Ottoman empire. The short story of the boat, as Wikipedia tells it is this:

The Ouzel Galley was an Irish merchant ship that set sail from Dublin in the late seventeenth century and was presumed lost with all hands when she failed to return within the next three years. After a further two years had elapsed, however, she mysteriously reappeared with her full complement of crew and a valuable cargo of spices, exotic goods and, it is said, piratical spoils. The ship has entered Irish folklore, and her unexplained disappearance and unexpected reappearance are still the subject of a number of conspiracy theories.

Many years later a pub by the same name was established. The name paid homage to this mythical part of Dublin folklore. The bar was located in the basement of commercial buildings on Dame Street that existed where the Central Bank was then built. For further reading on the Ouzel Galley, there is a website dedicated to the topic.

There is still a plaque on Dame Street to the Ouzel Galley Society, which was set up to arbitrate maritime disputes.

The Dame Tavern exists on Dame Lane directly across from the famous pub, The Stag’s Head. Back in the 1970’s, the 2 pubs were owned by the same family, the Tyson’s. During their stewardship of both pubs, what is now the Dame Tavern was named The Stags Tail, mirroring it’s sister pub directly across from it. The pub was originally just one story, so the comparison from head to tail was more apt. If you look up at the clock on the outside of The Stags Head you’ll see that it still bears the name of the Tyson family.

In 18th or 19th century Dublin there existed a pub by the name of ‘The Wandering Jew’. It was prominently located on Castle Street very close to Dublin castle in an area that had several pubs and ale houses. The closest pubs to that location now are The Lord Edward and the Bull and Castle. The name appears to have links to a 13th century myth relating to an immortal man who was cursed to walk the earth until the second coming of Jesus.

At the bridge that connects Clanbrassil Street with Harold’s Cross is an old abandoned pub (beside MVP). It’s most recent name was ‘The Man of Achill’. Prior to that it was called ‘The Old grinding Young’. According to one commenter on the Come Here To me Blog, the signage outside featured ‘ a man in 18th-century dress being fed into a mincer as an old man and coming out at the other end as a young man’. This would have been in the 1920’s. There is a watercolour painting of the pub on the National Gallery website if you want to see what the frontage looked like. According to the signage in this painting it was owned by someone with the surname of ‘Kavanagh’.

Thanks to John @thebeernut for suggesting it.

The Maid of Erin

On Marlbrough Street there exists a pub by the name of ‘The Confession Box’. Like many Dublin pubs, nicknames sometimes take hold and take over from the original name or the name of the proprietor. The Confession Box got it’s name in the period 1919-1921 during the War of Independence when sympathetic priests would use this pub to give communion to the rebels, some of whom had been excommunicated from the Catholic Church. During this period before the nickname took hold, the pub had a fairly nationalist name or at least one that would evoke an idea of romantic Ireland. It was known as ‘The Maid of Erin’. Link.

Thanks to @IamMarthaD for the suggestion.

The reasoning behind the name of this one has escaped us and we can’t seem to find many suggestions for its origin. What we do know about it is that it was a pub that existed on the river Tolka and it was immortalised by a mention from James Joyce in ‘Ulysses’.

Saw him out at the Three Jolly Topers marching along bareheaded and his eldest boy carrying one in a marketnet.

That would suggest that the pub existed at least in 1904 when the book was set. There is also a song by the same name composed in 1909 by P.W. Joyce.

Thanks to @johnstonglenn for this find.

The Aviary existed on Canon Street, a street that no longer exists in the Bridge street area. The pub was named after a bird market that took place in the lane beside the pub. There exists a video of the pub and the bird market before it was demolished in the 60’s. The video comes with narration and explanation of the market and the demolition and it’s well worth watching. The video was taken by ‘The Lorcan Film Unit’ whose family have digitised his videos and made them available on youtube.

While researching the Aviary we came across this fantastic resource, a website called ‘The Dublin Innkeeper‘, which is chronicling Dublin’s lost pubs.

The Thing Mote was a pub on Suffolk Street that has been O’Donoghue’s for as long as I remember drinking in town. The name makes reference to Ireland’s Viking past. The Thingmote was a raised mound that existed in the general vicinity of the pub until 1685. It was an assembly point of Dublin’s Vikings where they gathered to make laws and debate. The mound was removed and the land used to build up what is now Nassau Street.

Thanks to @DryWeave for the suggestion.

The Old Chinaman was a pub that existed on Golden Lane near Dublin Castle and Saint Patrick’s Cathedral up until the 90’s. It’s been described to us by those who visited it as a raucous place where rules were somewhat lax. It was regarded as a biker and bar and as Joe O’Shea said to us on twitter a few years ago it was ‘a terrifying spot‘.

We couldn’t find reference to it but apparently Viking remains were found after the pub had been demolished and the site excavated for the office block that took it’s place.

Thanks to Graham Hopkins @d11gunner for the suggestion.

Anyone who walks down Francis Street a lot will be familiar with the long derelict building that still bears the name of the pub as it last was; The Barley Mow. I’m afraid we don’t have details on how the pub came to bear this name. We thought it was unusual enough to share and be of interest. Hopefully someone reading this can enlighten us further. There’s a photo of the pub from Dublin City Library archives from 1993.