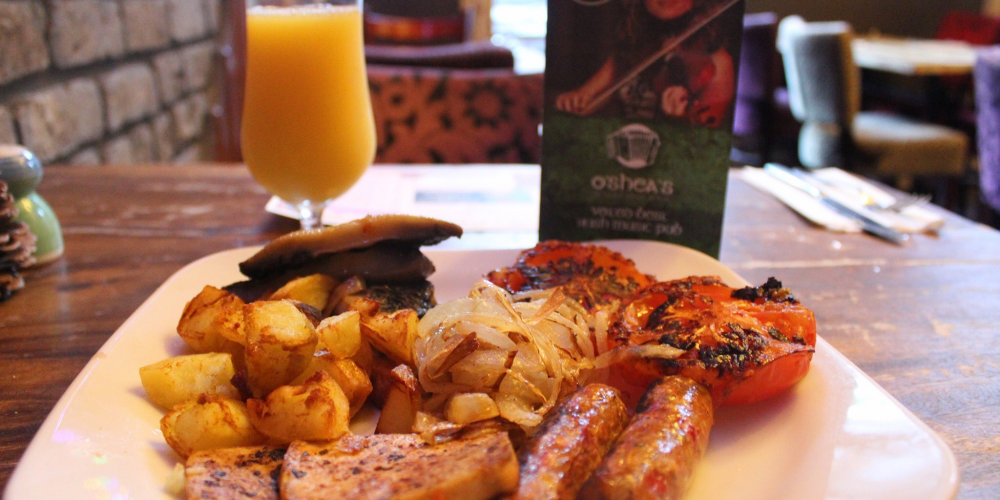 Pubs have been taking the culinary initiative in many ways, from sustainably sourced fish for fish and chips, offering good quality and locally sourced produce, and also more and more vegan offerings. It can be hard to find vegan options around the city, so we’re trying to make a little bit easier.

The new Brewdog in Dublin’s docklands as well as having an extensive beer menu have a decent food menu. It’s mostly burgers and pizzas, and they’ve got vegan options on both. They’ve got a 2 for 1 deal on any vegan or veggie main on Monday’s. They serve beyond meat burgers, as well as seitan steak, and buffalo cauliflower burgers.

The folks at Chew Food who do the food in The Big Romance on Parnell Street have put together a vegan cheese board. The option changes monthly. Pictured above is the vegan take on Chévre, which they describe as tart and zesty. Served with a sweet ginger and carrot preserve and vegan crackers.

You can get yourself a hearty vegan red lentil chilli in The Black Sheep on capel Street. The menu’s in Galway Bay pubs are usually similar, so you should be able to get this or another vegan offering in their other pubs, including Against the Grain, The 108, Gasworks, The Beer Market, and more. They’ve also got vegan options for party platters.

Here’s another Stonebatter option. There’s a Vietnamese food truck out in the beer garden of The Glimmerman from Thursday to Sunday serving up some delicious vegetarian and vegan food. Our favourite is the beautiful courgette and aubergine tostada. Link.