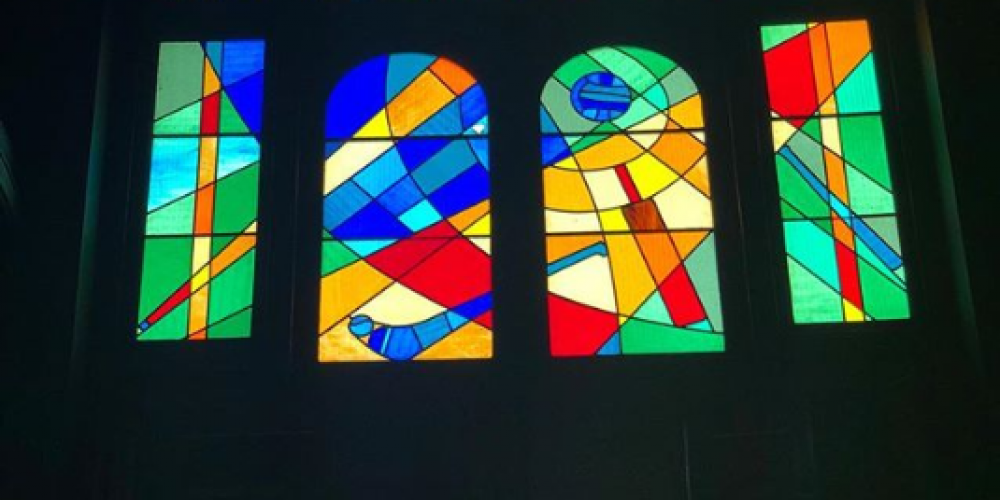 There are some features that pop up more often than others in the interior design of the typical traditional Irish pub. Portraits of famous Irish writers, old mirrors bearing the names of long liquidated whiskey distilleries, and the various Guinness merchandise collected over a few hundred years. One feature that has always interested us and captured our attention is stained glass, sometimes in the form of windows and other times as a decorative element in a ceiling or hanging on a wall. We’ve compiled a list of some of our favourite examples.

Madigans on North Earl Street has claim to the most highly regarded of all stained glass, not just in pubs, but in any business in the city. The stained glass here was designed and created by master artist, Harry Clarke, whose work is world renowned and much celebrated in Ireland. Much of his work was religious and appears in chapels and churches around the country, so it’s a real treat to see it in the secular and easily accessible option of a pub on Dublin’s north side.

The back room of The Palace Bar on Fleet Street is a bright space during the day, owing to the glass ceiling above. You might be forgiven when looking at images of the ceiling for thinking that they’re from a small chapel, but these designs are part of this fantastic example of a high Victorian era pub.

Such is the slendour of the ceiling in The Bank on College Green that you’d be tempted to lie down on the bar and ask for a long straw for your pint so that you could give it the attention that it deserves. The building was constructed as a bank in 1890, a structure designed to give assurance that your wealth was being kept in a place that was both safe and grand. Grand it certainly is, and not in the Irish colloquial sense.

The stained glass dome in Davy Byrnes on Duke Street is another fine example of art deco (we think) and resembles the Harry Clarke work in Madigan’s pub.

Well….it was once a church so you would expect there to be a bit of stained glass here or there. Or everywhere! Examples are dotted around this incredible bar, but one major example is the huge window at the nave of the church, showering multi-coloured light upon revelers.

Rody Boland’s has a very inventive multi-paneled stained glass work at the top of their stairs. It features, somewhat cryptically, references to around 10 different sports, with some like hurling and football being more obvious than others.

The Stag’s Head on Dame Lane is a beautifully ornate pub and another example of the high Victorian pub. There is a stained glass window with iconography that follows on from the name of the pub.

Grogan’s commissioned 2 stained glass pieces by artist Katherine Lamb to depict the pubs patrons. There’s one either side of the bar, showing the day time and night time crowds. There’s a wonderful video on The Irish Times where owner Tommy Smith explains his love for stained glass, the process of commissioning the pieces and going through the various characters in them. Link.

The Flowing Tide has a series of glass panels depicting the people of Dublin city as scholars, musicians, drinkers, dockers, and traders. One panel features the Custom House and the sale of fish and import/export of what is presumably some sort of alcohol.

Chaplin’s is another pub in close proximity to the docks that pays homage to that element of the cities’ past through stained glass. Featured is the street that the pub resides, the Custom’s House, and a map of parts of the world showing where goods go to and come from.

Not all stained glass has to be high art to qualify. This piece in Ned O’Shea’s of D.J. Carey and Páidí O’Sé highlights the pubs connection with Kerry and the GAA.

The Cat and Cage

Upstairs in the function room of The Cat and Cage in Drumcondra is this curved and patterned stained glass ceiling.