Since Publin launched in early December 2011 we’ve had a lot of inquiries from the media about the site and have featured in some of Ireland’s biggest publications.

On the 14th of December 2011 Hot Press online ran a story about us.

Launched at the start of the month, at a time when The Budget is bumping up prices and slashing people’s spending money, new pub price comparison site publin.ie is aiming to give the ordinary decent punters of Dublin more value for their money and the kind of key information needed to make the most of your night out.

2FM D.J. Rick O’Shea mentioned us on his radio show after a lot of initial twitter buzz around the site.

Following on from that ‘Star Chic magazine’ featured us in their January 28th 2012 issue.

“We’re loving a clever new website www.publin.ie that promises to be “Dublin’s best pub and price guide”. There is a list of the cheapest pints in town, plus a handy weekly deals section so you can plan a low cost night out. For example, when we logged on the Bleeding Horse pub in Camden street was offering a Captain Morgans and orange for just €5, all week.” 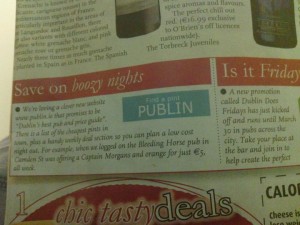 On Saturday February the 18th 2012 Publin featured heavily in an article by Roisín Ingle on the front page of the Irish Times weekend review.

Sitting at a table is John Geraghty, the creator of the new website publin.ie, which lists the best pub deals on alcohol in more than 200 Dublin pubs. 0“It’s basically a site that tells you where the cheap drinks are. I’ve spent the past year doing the legwork finding out about special deals, which most of the pubs now do,” he says. 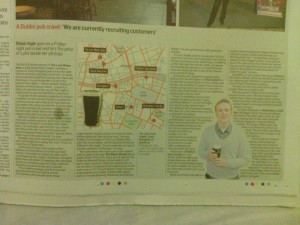 On the 12th of March 2012 the BBC travel website featured publin in a story about pub culture around Dublin City.

In the May 2012 issue of Stellar magazine, Publin got a great mention. In the A-Z of Dublin, P was for Publin.

“Money is tight, we know, so paying €7 for a vodka and tonic in one bar when it’s just €5.50 in one next door is a crime. So what’s a girl to do? Enter Publin.ie. “The aim of the site is to give users the opportunity to plan their night out based around the price and quality of Dublin pubs”, explains creator John Geraghty. “It’s not just about prices. It’s also quality of pubs and the diversity that they offer. By that I mean craft beer pubs, themeed pubs, pubs with beer gardens, wifi, etc”. Clever, right? Check Publin.ie now for a special STELLAR-inspired pub crawl and be sure to follow @publinie on twitter. Oh, and, as awlays, drink responsibly.”

As Stellar magazine features heavily in RTE’s ‘Fade Street’, we made a special Fade Street pub crawl for the occasion. 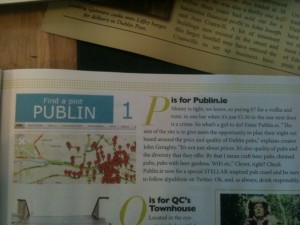 On June 17th 2012 Publin was mentioned in the Sunday Business Post.

What it does: Locates cheapest pint in Dublin.

What it says: “Publin is Dublin’s only pub price comparison and deal-listing website.”

How you save:  before you head out for a tipple, check out Publin’s price guide to see where you can enjoy a night out without breaking the bank. 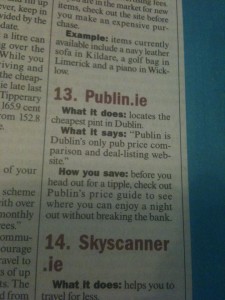 On the 13th of January 2013, Thejournal.ie featured a story about an interactive map of Dublin pubs from 1969 that we created a few days previous. Link

The article was the most shared item on social media that day and it also trended in their Dublin section. 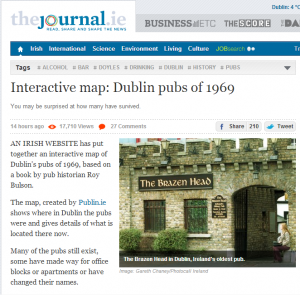 With the launch of the Publin app on the 17th of September 2013 there was a storm of publicity within the space of a few days.

The Irish Independent featured Publin twice within the space of a few week. On Friday the 30th of August Publin was mentioned in the Day and night magazine. Link.  And again on the 17th of September in the lifestyle section. Link.

98fm ran a story about the launch on their website. Link.

The Publin app was discussed by Rick O’Shea on his show on 2fm to a massive listenership.

@publinie We already mentioned you on air yesterday 🙂 The lads mentioned it and I was all “Oh, I knew those guys years ago…” 😉

John Geraghty, founder of Publin talked about the app on the morning show with Joe and Keith on Phantom FM on Thursday the 19th of September 2013.

The Daily Edge (Thejournal.ie) wrote an article about the app titled ‘So, what’s Publin all about’. Link

The Evening Herald covered the launch in their print edition on the 18th of September. 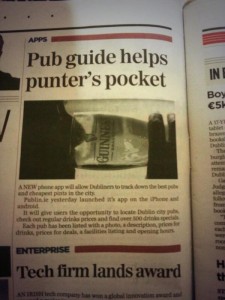 Any agency wishing to contact can do so through our email address publinie@gmail.com .We always respond promptly.