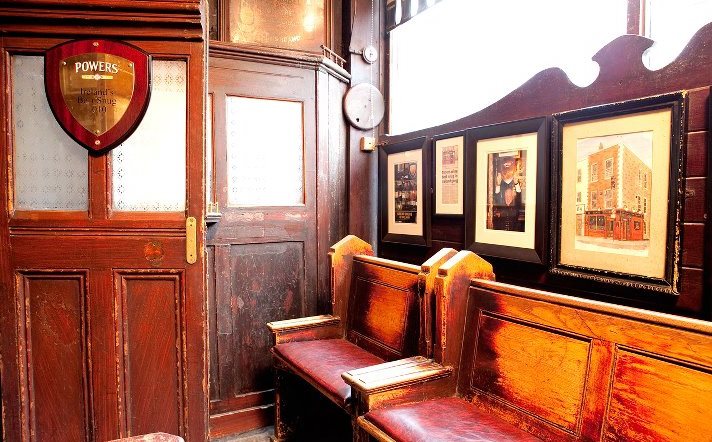 We receive a lot of daily requests for places to go, what pubs have what facilities,  and general queries about pubs in the ctiy centre, but we received one that started a snowball of information about the old names for current Dublin pubs. Hundreds of tweets and facebook messages later, we now have a massive list of 150 old names for 90 Dublin pubs, and it’s still growing.

Someone mailed us to ask what Dragon on Georges street used to be known as. We didn’t know, but one tweet later and we had several replies to the question. It was Sosume. We’ve thought in the past about starting a conversation about what pubs used to be called and including the info on each listing page for pubs. We asked the question, ‘What names did current city centre pubs used to trade under?’ and now we have a bumper list. Here are a few of the more unusual names, some of the interesting recurrences of names, and a general summary of what we have found.

In less than 24 hours we compiled a list of old names for 83 Dublin pubs, with  123 names in total. One thing that struck us as we looked through the list was that some pubs used to trade under names that are now in use today in different locations. The Temple bar pub was formerly known as Flannerys, The Hairy Lemon was known as Pygmalion (as well as ‘The William Tell’), Against the Grain used to be D2, Eamonn Reas used to be Russells, The Village used to be Mono, and The Portobello was Searsons. Some names are common and interchangeable, but the fact that the Hairy Lemon was once Pygmalion, when there’s a bar by the same name around the corner is interesting. No doubt there’s a link to George Bernard Shaw in there.

Some of the entries go further back than others. McDaids of Harry street tell us that they were formerly ‘The William Davy’ until 1936. Smyths of Haddington road was named Renehans in 1954, and they tell us that while doing renovations they found old Guinness paraphernalia dating back to then. Names for Farringtons in Temple bar included Timmons, The Norseman, Monks in the 1840s, and The Wooden Man Tavern as far back as the 1500s.

The most common recollections that publiners had were The Porterhouse Central being Judge Roy Beans, Murrays being Frazers, and the Grafton Lounge being Cocoon. That says more about the demographic of the Publin audience than anything else. A few names really stand out as unique. O’Neills on Pearse street was formerly known as ‘The Crowing Cock’, even though it’s not an early house. What is now Flannerys on Camden street was once ‘The Camden Singing House’. It’s rare that you’d get a ballad sung in there these days….   More recently, O’Donoghues of Suffolk street was called ‘The Thing Moate’, an unusual name. The Czech Inn was once named after an old ruin of a tower around the corner, ‘Isolde’s Tower’. The Dame Tavern, across from the Stags Head, was once  aptly named ‘The Stags Tail’. McGrattans on Baggot street went under ‘The graduate club’ (presumably for the student crowd), and Barbellas (possibly an old Sci-fi fan misspelled Barbarella).

What started out as a list for people to remember what former names were within the last few years has developed into a really insightful list of how Dublin’s pub culture has changed and also shows how valuable crowd sourcing can be when trying to trace history. We’re just lucky that we have the audience to undertake such a survey.

We’re now asking ourselves what to do with this information and how to preserve and expand upon it. We have thought in the past about creating a retro Publin, where users can take a look back in time at what pubs used to exist and search licensed premises by decade. It could be a big undertaking, but with the right website structure it could enable people to contribute knowledge that is not written down and may be lost.

We would be very interested to hear peoples thoughts on how we could use this information to create an archive of pub material and to have an easy reference points for scholars, history buffs, and pub historians. Pubs have always played a large part in the social scene of the city, and we feel it would be a suitable tribute to that illustrious history. The list is ever growing, and if you would like to contribute (an old name for a pub or a pub that no longer exists), please leave a comment below, message us on facebook or twitter,  or email us at publinie@gmail.com. You can look at the full spreadsheet through this link.       We have previously created a map of Dublin pubs from 1969 that may also be of interest. Link