post-title Several reasons why you should go to Thomas Street more often.

Several reasons why you should go to Thomas Street more often.

Local businesses around Thomas street have recently come together to highlight the fact  that the area is in decline due to what they call “State sponsored dereliction”, i.e. NAMA is letting buildings fall into disrepair. Link. We’ve always had a fondness for Thomas street, and specifically it’s pubs, so we’re taking it upon ourselves to let you know a bit more about the pubs and tell you why Thomas street could be another Camden street.

Thomas street is a bit of a tech and cultural quarter of the city, with the Digital Hub tucked around the corner from Arthurs, and NCAD on the main street providing a bit of custom to the local bars and cafes. There’s certainly more than just good pubs in the area, but that’s what we know and that’s what we’re going to show you.

For some, Thomas Street is just a bit too far of a walk for their night out. It’s around a ten minute walk from Dame street (if even) and we’re going to give you a few reasons why you should take a short stroll and try something different.

Definitely a unique addition to the area (and technically on High street), The Little Green is not only a bar, but also a gallery. They host several displays of artwork of different kinds and are a bit of a hub for creativity. We’re constantly teased by their photos of lunchtime specials and it does very much look to be worth a visit for the food alone. There’s always events going on here, including movie nights that revolve around a theme. One of the more recent themes being Wes Anderson movies. They also did a ’12 movies of christmas’ last year. The beer selection is good and it certainly ticks a lot of boxes for trying something different, both in terms of events, but also in atmosphere and decor.

The Clock has a good reputation for being a very friendly place. The customers are usually local, but it can attract passers-by. One thing we didn’t know about this pub until recently is that they have an aviary in the beer garden. Not something you’d expect to find in a Dublin pub and probably the only one in town (prove us wrong!). They’re obviously a conscious and community friendly bar, as they offer discounted prices to OAPs. They sell a regular selection on tap and have a few cheaper options for those on a budget.

Bakers definitely puts in the effort when it comes to live music, food, and local spirit. Chef Dougie in the kitchen is always cooking up a storm of reasonably priced traditional meals with enough quality to keep people coming back in droves. The have weekly live music, including ballads, trad, and some standard fare. They even do a deal or no deal night if our memory serves correctly. There’s no reason why a place like this should be overlooked by passing tourists. It ticks all the boxes for them in terms of good food, good guinness, friendly staff that Irish pubs are known for, and some toe tapping tunes to keep them entertained.

The last time we were in Kennedys a local man came in to get a bowl of water filled for his dog outside. Did the staff oblige? Of course they did! They’re a Thomas street pub and Thomas street is known for the friendliness of their bar staff. They’re big fans of karaoke in here and you can hear a few renditions of crowd favourites several nights a week. A friend of Publin commented that it’s probably one of the most underrated pints of Guinness in the city. And why not, it’s so close to the Guinness storehouse you can smell the hops. They have an excellent darts setup at the back of the bar, with a well lit raised platform. We’ve heard that for this reason it’s a favourite of some NCAD students, and of course also for their reasonably priced pints.

Whenever we ask Publiners what they like about Thomas street, the answer is usually resoundingly ‘ The Thomas House! ‘. As a venue they’re very unique and it shows how good they are at booking good bands that people have no problem making the short trip from the centre of town to hang out in this extremely cool dive bar to listen to the tunes and drink some really good international and craft beer. They’re by far the most entertaining pub on twitter simply for the reason that they’re being themselves, and that openness translates to the atmosphere of the pub. Their events range from Punk  gigs to skalectrix nights, from  ska gigs to craft beer tastings. They know their audience and they’re not afraid to try new things. They even have a barber in on Saturdays so you can get a hair cut and have a beer. We’re big fans of the Thomas House and what they’re doing. Long may they reign.

Arthurs is probably the pub closest to the Guinness Storehouse, and as such they have a good relationship with the brewery. The Guinness here is smashing. So much so that a lot of the Guinness staff drink here. The bar is quite large and has a huge open fireplace and also an area for live musicians to set up and get the crowd going. Upstairs in Arthurs they have been getting more into events, with a monthly comedy club ‘ Taking Liberties ‘,  and  a new play called ‘ The Robert Emmet Experience ‘ . The crowd here is a mixture of locals, people working in the area, and tourists who have heard of it or just couldn’t resist popping their heads in on the way back from the storehouse. Like all of the pubs on Thomas Street the staff are fantastic and are born with a sense of hospitality and friendliness.

The Hill Top is, from what we know of it, a real locals bar that shares the community spirit of other pubs on the street. They do food, including their much touted Irish stew, and cater with sandwiches for their popular darts and bingo nights. If truth be told, we don’t know too much about the Hill Top and that’s something we’d like to change. Any time we have dropped by to tell them about Publin and ask for their prices they’ve always been obliging and interested in what we do.

We asked Publiners what they thought about the street and here’s what they had to say.

@publinie It’s a mixed atmosphere of eclectic and local. Did 12 pubs along the street one year, great craic in The Clock!

@publinie grew up in the area in the 80’s, was home at Xmas and did a pubcrawl of Thomas st and Meath st, friendlier people u will not meet. — Darren (@valerdar) May 8, 2013

@publinie I once saw a fella having a fight with his bag on Thomas St. Also saw a fella putting on a life jacket to have a pint. 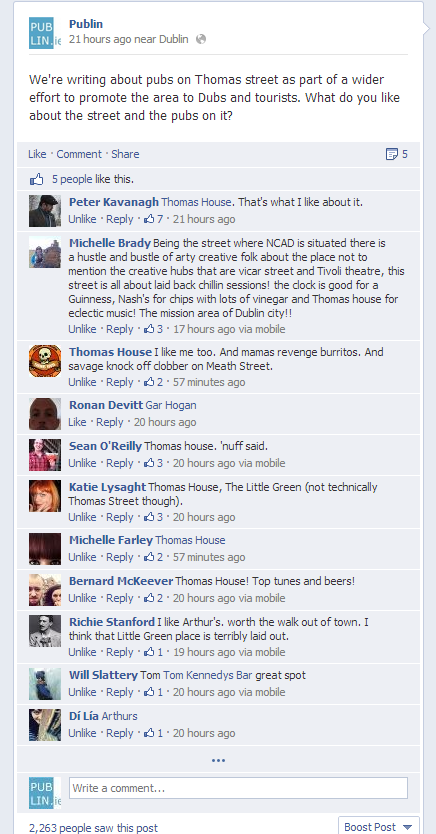