post-title Where to buy alcohol on Good Friday

Where to buy alcohol on Good Friday 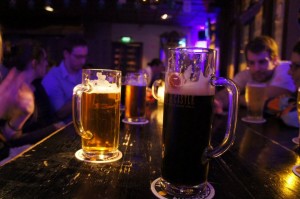 Click this link for the 2016 version of this article.

Year on year we deal with the same old road block of pubs having to stop serving alcohol on Good Friday. The law may be a relic from the past, but all is not lost. There are some loopholes that mean there are certain places around the city where you can still be served.

Here is our list of ways to buy alcohol legally in a licensed premises on Good Friday and a listing of pubs and bars open selling food only.

(Edit: We’re doing further research into finding whether numbers 3 and 7 are accurate)

7)Some clubs are given authorisation to sell alcohol for 6 hours on good friday. I think that’s a long enough period to have an acceptable evening. I don’t mean nightclubs, these can be GAA clubs, working mens associations, or other similar clubs.

8)Train stations. You must have a train ticket to be served. How much does a child fare cost these days? Madigans in Connolly station will be open for the day. As we said, just buy an inter city train ticket.

9) Fibber Magees. Fibber Magees will be the only pub in town with a license to open at midnight. They’ll be opening the doors at 11pm and serving alcohol from 11pm to 2.30am. Happy Days. http://publin.ie/2011/fibber-magees-2/

These are your options as they stand. As we understand, pubs and clubs will not be opening from midnight on good friday. Unfortunately, the gardaí don’t seem to be giving any license for that night.

Some pubs will be open during the day serving food. Most pubs that do a trade in food will probably remain open. These are the pubs that we are sure are opening. This list will be updated in the run up to good friday: Bull and Castle, The Church, O’Donoghue’s Suffolk Street, The Bank on College Green, The Bachelor Inn, Murrays on O’Connell street, Searsons of baggot street, The Brazen Head, Madigans North Earl Street, O’Connell street, Abbey street, Pifko.