post-title Dublin pubs in film: A fistful of dynamite in Toners

Dublin pubs in film: A fistful of dynamite in Toners 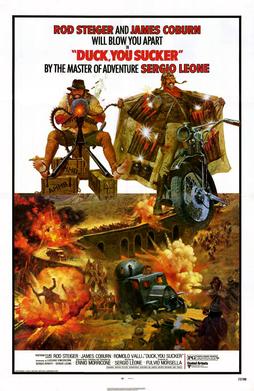 There’s certainly a lot going on in the poster.

Ireland has been used for a lot of big budget international productions such as Braveheart, Michael Collins, and Saving Private Ryan, and Dublin’s pubs have even gotten in on the act. We’re doing a series of articles about movie scenes filmed in Dublin pubs.

Duck you sucker! That is one of the alternative titles for the 1971 film ‘A fistful of dynamite’ , made by Sergio Leone and starring James Coburn and Rod Steiger. It is the second part of a trilogy, which also includes ‘Once upon a time in the west’ and ‘Once upon a time in America’.

Two scenes from the film were shot in Toners pub on Baggot street. Both scenes covered the same event in the film, but show different angles on it. Toners has barely changed in the years since the early 70s when it was filmed.

The view of the police as they enter.

Coburn looks at the policemen as they enter. You can see them reflected in the mirror.

In the scene, a man is brought into the bar to pick out accomplices and people he knows so that the police can arrest them. James Coburn’s character executes 2 police or military men, followed by informant. You can see some of the bar and cask taps, as well as the wooden dividing walls that break up the bar.

Toners have a large poster of the film in their beer garden area. If you ever wondered why that one movie poster was there, then wonder no more.

Ennio Moricone provides the score for the movie, as he did for most of Leone’s productions.

You can watch the clips below. The scene in the pub starts at 3 minutes 16 seconds in the first clip.