post-title The head of the UN had a pint in Brogans last night.

The head of the UN had a pint in Brogans last night.

Secretary general of the United Nations, Ban Ki-Moon is in Dublin at the moment speaking about climate change, Ireland’s 60th anniversary as a member country, and other affairs of state. As well as these very important matters, he also decided to stop into Brogans pub on Dame street for a pint of Guinness. 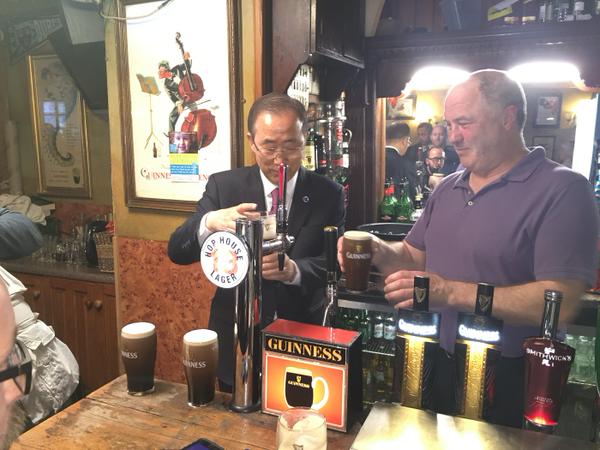 Usually it’s the Guinness Storehouse, Temple bar pubs, or ancestral places that get the heads of stats and foreign dignitaries, but Ban Ki-Moon decided to go for Brogans beside the Olympia theatre. The pub didn’t look that packed, but there were a few tweets about it.

Ben Brogan and Ban Ki Moon…I have no words. pic.twitter.com/NmEVZvHhhY

When Benny pulled a pint for Ban Ki Moon in Brogans Bar!! pic.twitter.com/jU5vc0HdOT