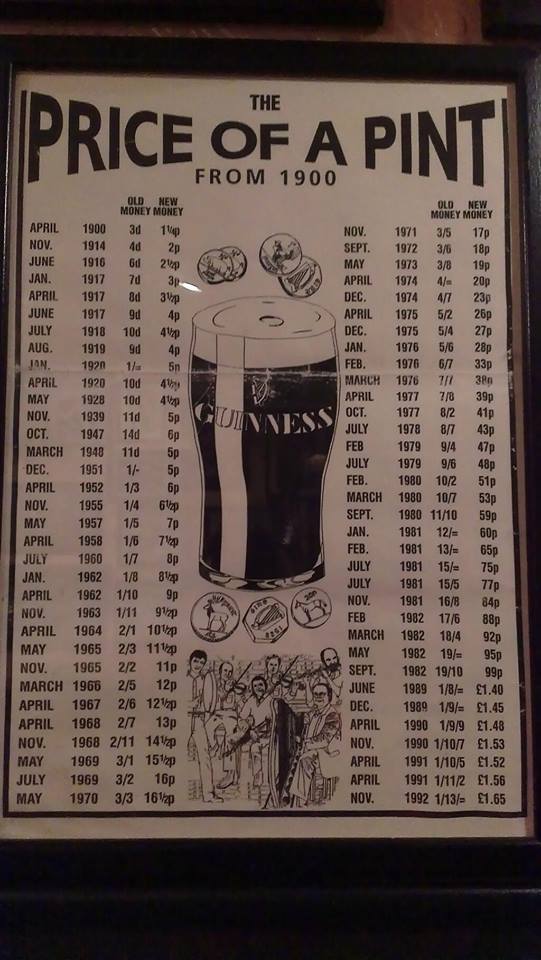 The image on which we based our calculations. Source: DarraghD http://i.imgur.com/uKwfmbt.jpg

We filled in some of the gaps using information from the central statistics office, which provides an index of the average price of certain key consumer goods. A pint of stout just happens to be one of those consumer goods.

Looking at price lists from the 1920s and further back can make it seems that the price of a pint back then (5 pence) was hugely better value than it is today. That would probably be true, but not necessarily by much. Indeed, a pint of Guinness could be had in Ireland for an equivalent price of €3.17 back in 1928, but you could find a pint in Diceys on a Tuesdays for €2.00 this year. While we’ve taken inflation into account, one indicator that might give a better overview of the price is how much a pint costs as a percentage of weekly income. That, however, would be a bit of a stretch for us and would require a better statistician.

We should clarify that this information is for the price of a pint of stout for the most part. The info from the CSO groups stout and lager together.

Using this price guide you can tell how much people spent on a pint when they were experiencing big events in recent world and Irish history. For example…

The current average price of a pint of stout countrywide is €4.30.

We are, of course, dependent on the accuracy of this list somebody has stuck up in a pub, but we’ll treat it as genuine for the sake of this article. The info from 1997 is entirely accurate, as it’s taken from the Central Statistics Office website. We used an inflation calculator to help us out, and that only gives info starting in 1922, hence the exclusion of prices before that year. Link.

While this might not be 100% accurate, we feel it gives you a decent idea how the price of a pint has changed.

You’ll notice that the years 1983-1996 are not covered in this table. That’s because, while the CSO does have that info, we haven’t been able to find it on their website.