post-title This Dublin pub did takeaway delivery in 1852. What else was on the menu?

This Dublin pub did takeaway delivery in 1852. What else was on the menu? 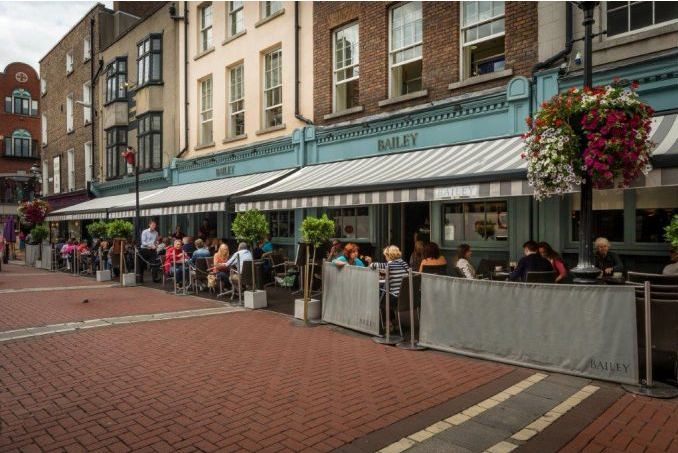 While reading through a 1968 pamphlet called ‘The Bailey, the story of a famous tavern’ by Ulick O’Connor, we came across a mention of a newspaper advert taken out by the pub in 1852 describing their menu and offerings.

We tend to think of pubs of the time as being somewhat unsavoury in character, but this advert from The Bailey paints a different picture. They even advertise the fact that they deliver around the city at no cost.   Here is the text of the advert…

Hot joints (the best the markets produce) or beef steak and oyster sauce at 1s per head. Chips, kidneys and C. as usual. The real Red Bank Burren Oysters, fresh from the bed, one every second day. Whiskey punch (Jameson 5 year old) brandy, rum, Hollands, Drogheda Ale, and Guinness XX in wood and bottle: all on the most moderate terms. All orders sent to 3 Duke street will be promptly attended to and sent (carriage-free) to all parts of the city.

We’re unsure as to what the ‘and C. as usual’ refers to. They intentionally capitalise the ‘Red Bank Burren Oysters’, so they must have been known for their high quality at the time and the make sure to specify that they are ‘real’. The bar also goes so far as to say that they are reasonably priced for the quality they provide- ‘all on most moderate terms’.

Nowadays we don’t think twice about ordering from a local takeaway, but can you imagine having fresh oysters and a bottle of Drogheda ale delivered by horse drawn carriage in the 1850s?!