post-title Dice bar are opening a new sister bar on the North quays.

Dice bar are opening a new sister bar on the North quays.

Dice bar, based on Benburb street are to open a new sister bar around the corner on the North Quays near the Croppy Acre. The site of the new bar has had a bit of a troubled recent history. It was formerly ‘Bigs Bar’, and more recently ‘Button and Coin’. The location is sure to have more success now that Dice bar have gotten involved.

Dice bar has been consistently popular for at least 10 years now (going by memory) and they must be in with a good shot of transposing that success to the new bar. It is in a spot where foot traffic is hard to come by, but the good name of Dice bar means people might be more aware of its location and possibly be more willing to walk a tiny bit extra for something new. After all, other bars that were once thought to be in an undesirable location have gone on to thrive. Look at The Beer Market on High street. That location had 4 or 5 names in as many years before the Galway Bay Brewery made it a successful spot.

The bar is actually quite close to Stoneybatter, which is thriving at the moment. If they can convince some people in that area to make the trip down, then they’ll be flying. 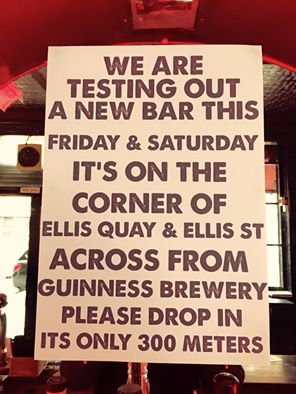 The new bar is as yet unnamed and opened last weekend for a short trial.  We weren’t in the bar at the weekend, but we had been in button and coin several times. It’s actually a really good space, with 4 different areas on different elevations. The bar had a pool table, pizza ovens, and board games (including the 50 shades of grey board game). We can’t confirm whether the new bar will retain these.

The bar also claims to have the only view in town of the Guinness brewery. We can’t quite think of anywhere else, so they may well be right. They’ll be bringing their signature revolution red brew to the new bar as well.

We were big fans of Button and Coin as a space, so hopefully the Dice bar folk can get a crowd in and make it a sustainable venture.