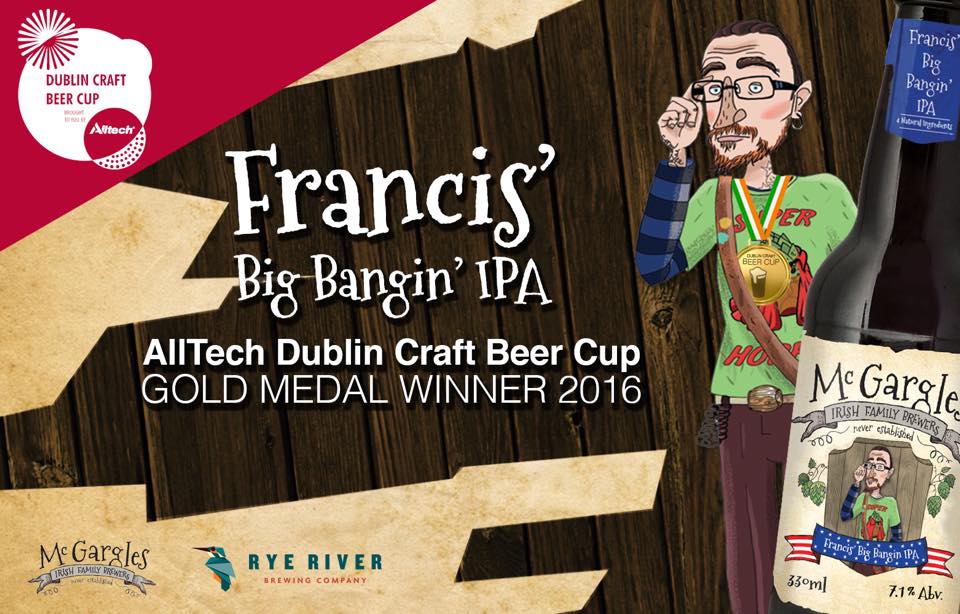 For the last few years the Alltech craft beer and food fair has played host to the increasingly prestigious ‘Dublin craft beer cup’. Although there are quite a lot of awards ceremonies at the moment, this is definitely one of the more well thought of.

There are bronze and silver, and gold medals given out, but there is only one overall winner of the craft beer cup. That deserved honour this year went to the Rye river brewing company for their McGargles ‘Francis’ Big Bangin IPA’.

The tasting notes for the beer descibe it as ‘ A full on West Coast style IPA that comes bangin’ down your door with a trio of Columbus, Mosaic and Simcoe hops which give it a tropical balanced flavour with a lingering aftertaste.‘ The beer packs a punch at 7.1% ABV.

We didn’t get to try a sample ourselves as they quickly ran out of this very popular brew. It’s only a matter of time though before they’re on the shelves of every off license in the country.

It’s another feather in the cap of a team of brewers who have been winning awards and going from strength to strength in recent years. Bear in mind that they brewed this beer and have kept a consistent standard while in the middle of moving from one brewery site to another. A very impressive feat.

When lifting the cup aloft, the group of brewers there to accept lifted it like it was the world cup.  Congratulations to all at the brewery.