post-title Pubs in Dublin NOT allowing 12 pubs of Christmas groups.

Pubs in Dublin NOT allowing 12 pubs of Christmas groups.

It’s back again. Not the 12 pubs tradition, our list of pubs not allowing 12 pubs of Christmas groups in. This is a Publin tradition for the last 4 years. It seems to get more popular every year, and it seems as though the 12 pubs phenomenon might be slightly down on last year.

Most pubs on this list are not allowing any 12 pubs groups in, but there are some that take a wait and see approach. Generally speaking, the higher you are on your list of the 12 pubs, the less likely it is that you’ll be let in.

We should say that generally pubs are very happy to welcome people in Christmas jumpers, and they won’t be refusing access on that basis. 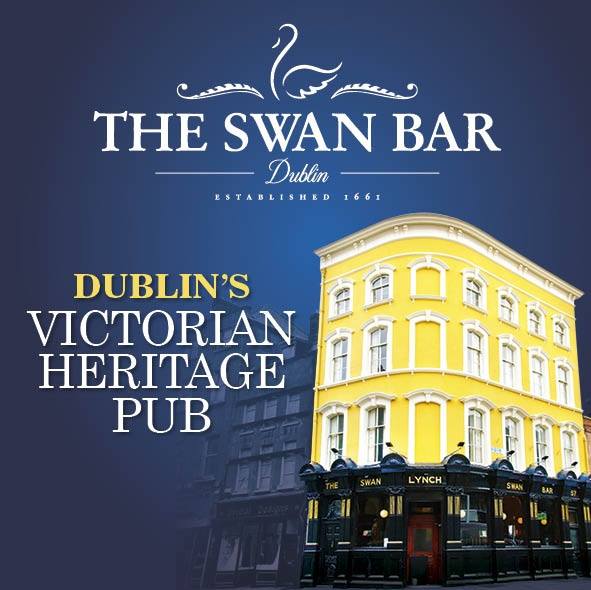 The Swan are always the first bar on this list. They were one of the first pubs to ban 12 pubs groups. It’s more about keeping their regular customers happy and retaining the atmosphere that they’re known for. 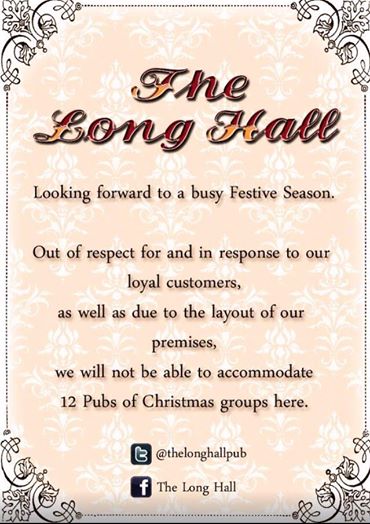 The Long Hall consulted their regular customers last year and the word back was that they would prefer a 12 pubs free zone. They’re keeping the same policy this year. It’s busy enough in here at this time of year without large groups coming and going. 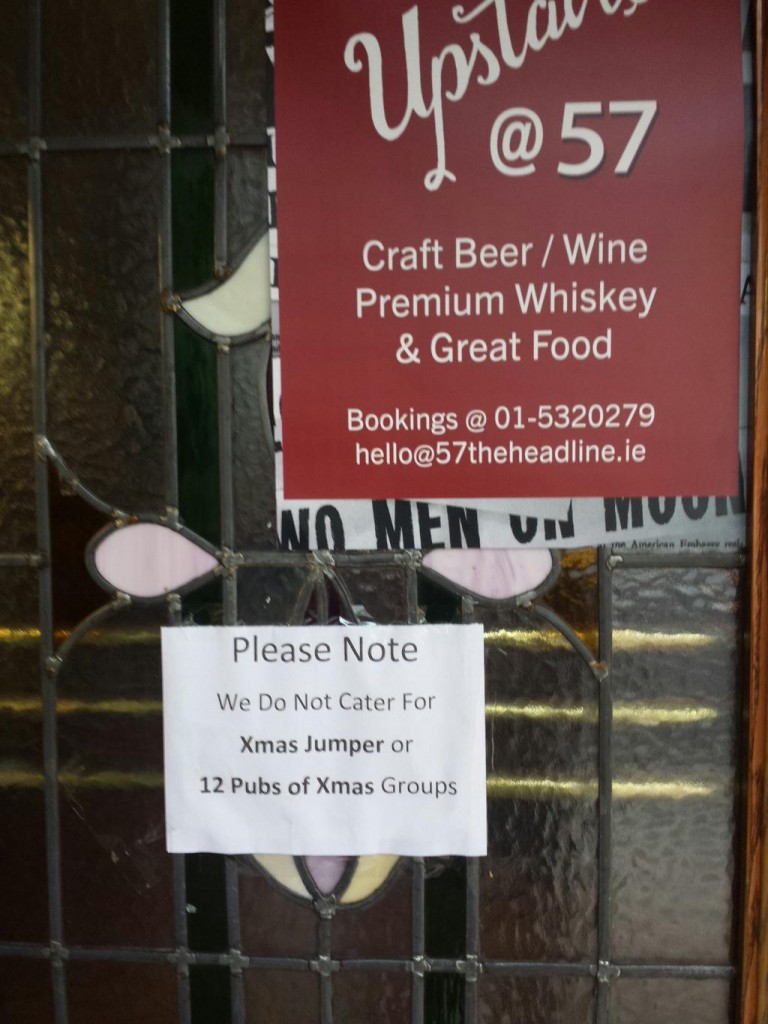 The Headline are dusting down last years sign and hanging it up once again. Once more, it’s out of respect for their regular customers. 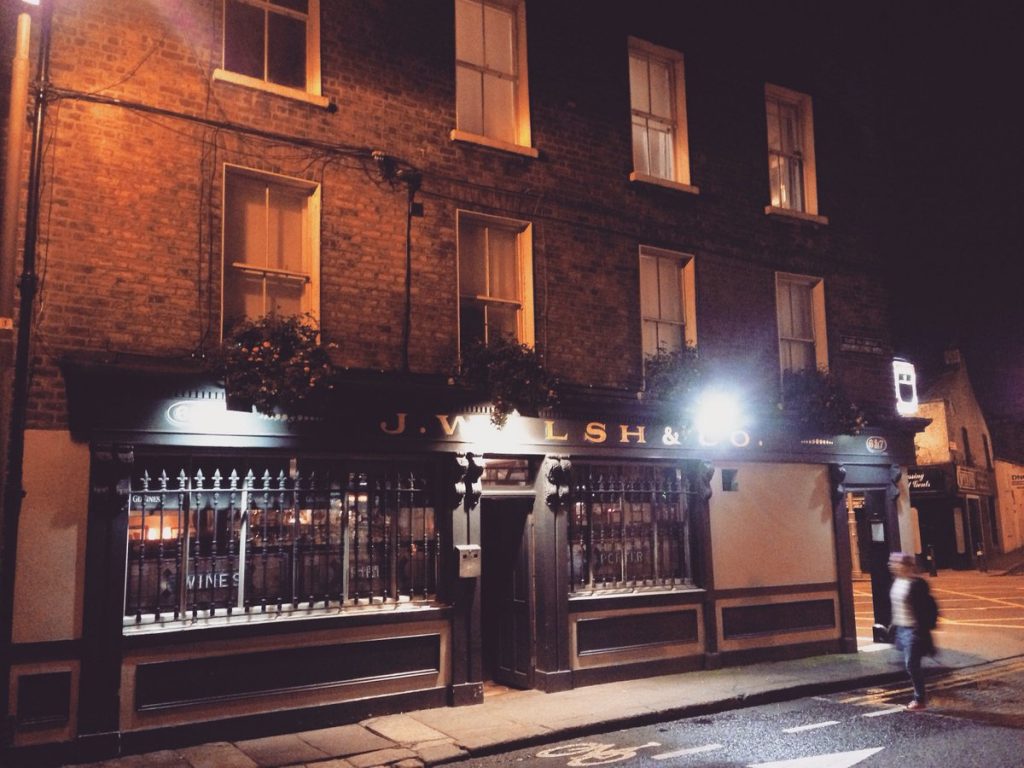 Walsh’s Stoneybatter is another small pub that can’t handle the throng. They’ll be turning the groups away. 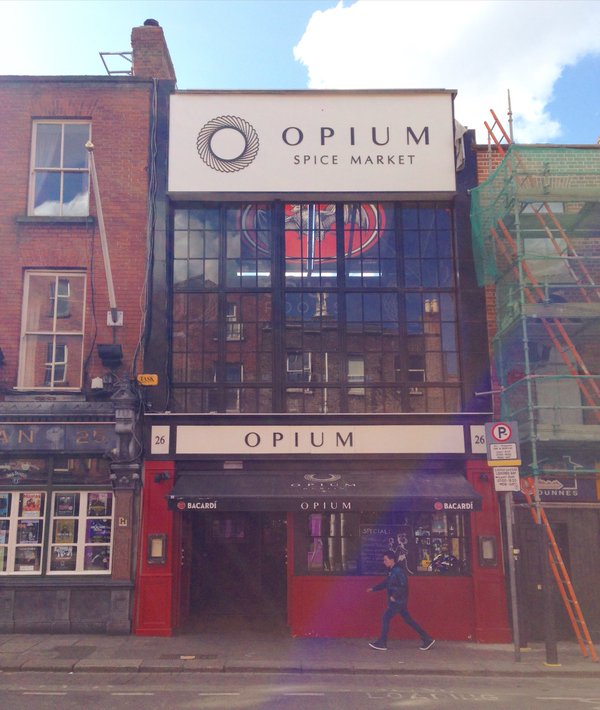 Opium confirm once again that they’re not allowing them in. 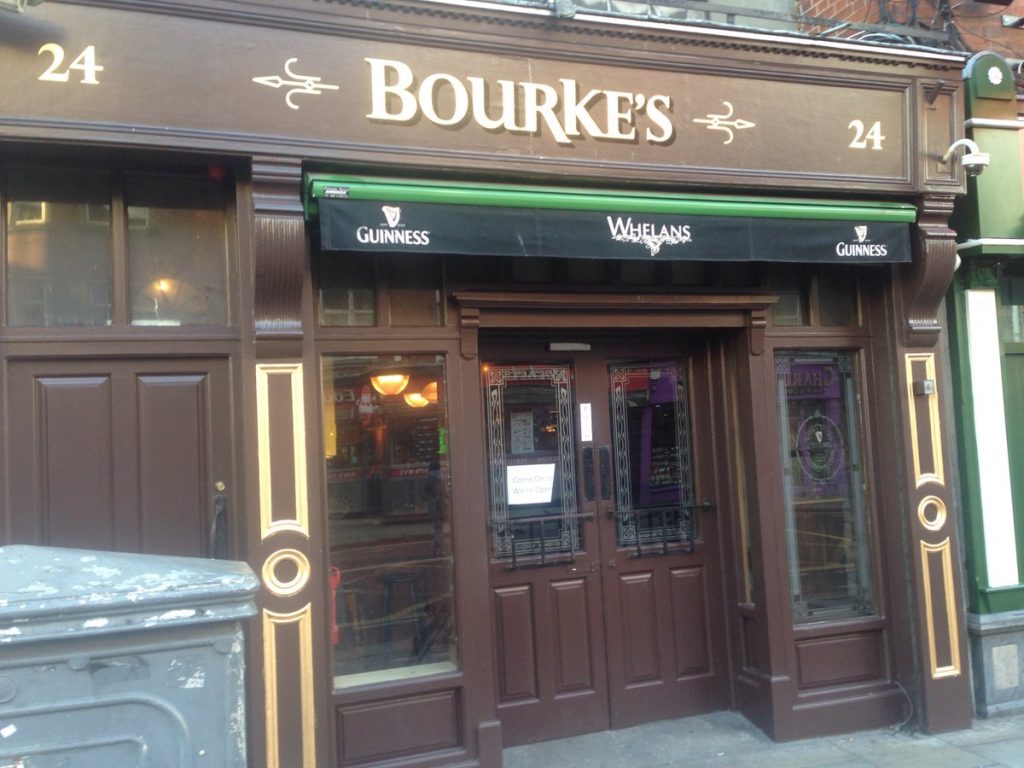 Bourke’s is the new bar attached to Whelan’s on Camden Street. Their statement on twitter was fairly clear “Out of respect for everyone’s sanity we will not be catering for ’12 Pubs of Christmas’ groups. Feck off and thanks” 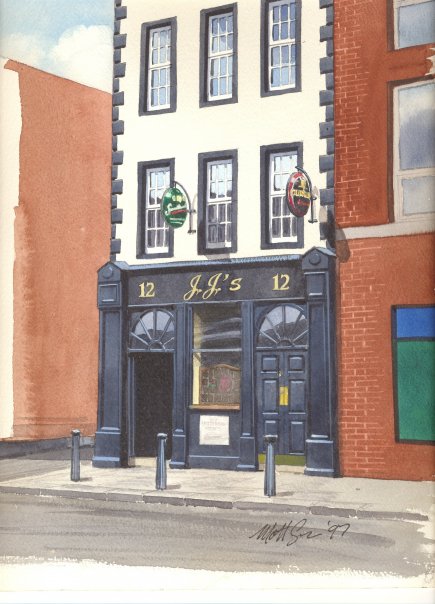 JJ’s confirmed to us that no, the groups won’t be making an appearance here this year. 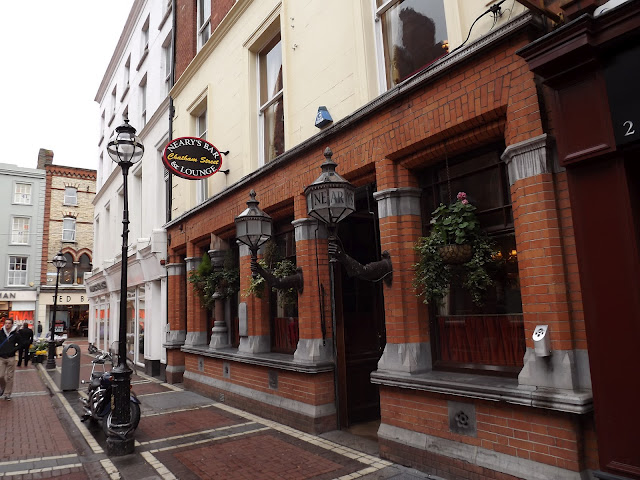 Neary’s said in a post on facebook that “NEARY’S SAYS NO!!!! ……. to the Christmas jumper clad, Santa hat wearing ,flashing light entangled , once a year drinking, countdown timer whistle blow, drink spilling, obnoxious ordering groups of people attempting to do the 12 pubs of Christmas…”

Is that clear enough? 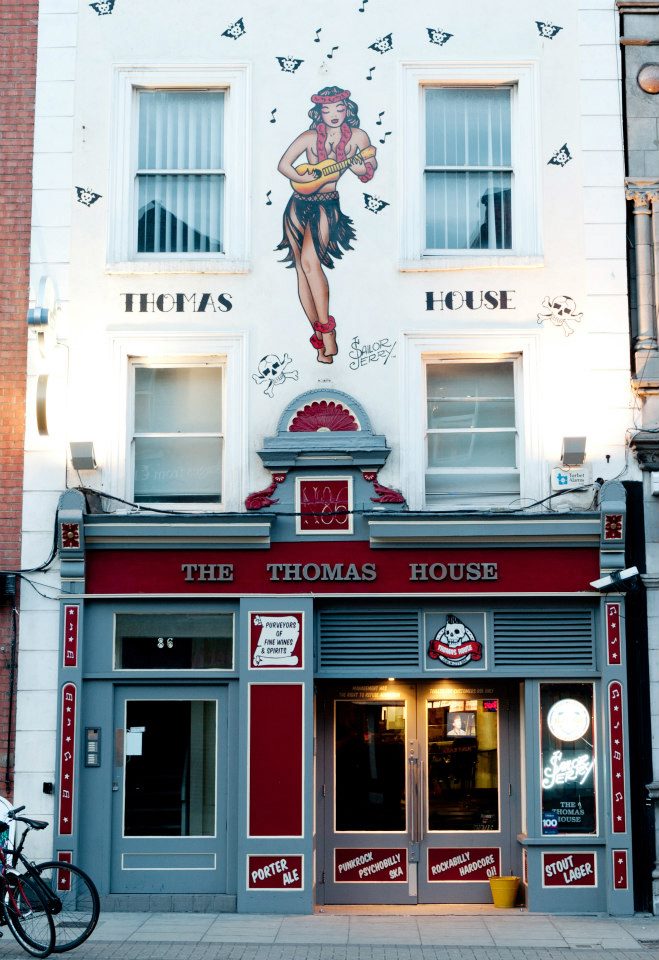 The Thomas House are adopting a wait and see approach. Generally, they don’t like being at the end of the 12 pubs list, so your chances will be greatly increased if this is at the top of your list.

Lemon and Duke off Grafton Street are operating a policy of keeping the bar comfortable for bookings and regular customers, so they won’t be allowing 12 pubs groups in.

Bowes on Fleet Street is a small place and would have similar reservations about large revolving groups coming and going. 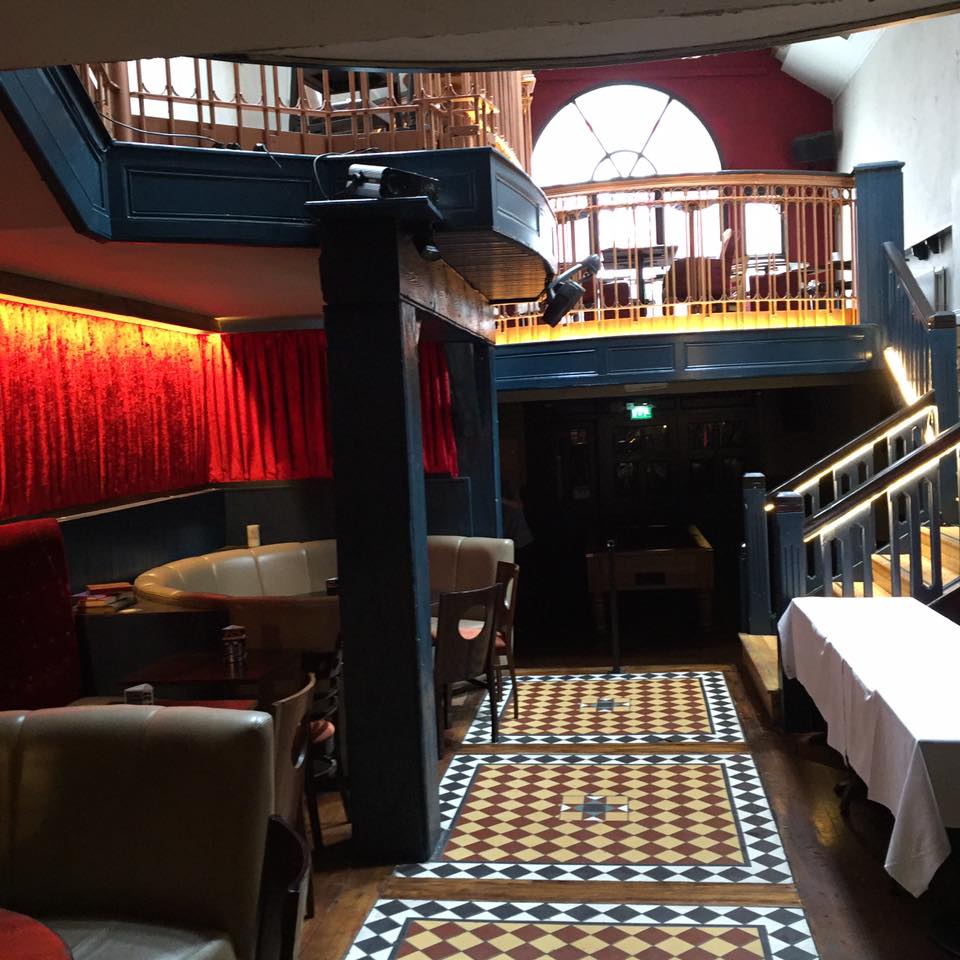 The Adelphi on Abbey Street have added their name to the list as well.

There’s another few pubs that have either been on previous lists or were rumoured to not be allowing the groups. We’re working to confirm them before inclusion on this list. They include O’Connell’s, Anseo, and The Old Stand.

If you know of another pub not allowing entry to 12 pubs groups, just let us know via social media or via email publinie@gmail.com