post-title Say hello to PintAid, the app that lets you donate a pint.

Say hello to PintAid, the app that lets you donate a pint.

There’s a new charity app launching this week that aims to mix the generosity of Irish people with their love of the pub. Lot’s of charities have sought to solicit donations from people by saying that it’s ‘only the price of a pint’. Now, the PintAid app streamlines that process and gives you the opportunity to donate the price of a pint when you’re on a night out.

‘Drink outside the box’ is the tagline for the app, and that’s exactly what they’re trying to get you to do. The app seeks to make the process of donating the price of a pint as easy as possible. Each month a new charity will be nominated and a fundraising target will be set. For this first month the charity is Inner City Helping Homeless, which has a target of €10,000. On the app you will see how close the collective of pint donors are to reaching the target and how many more pints need to be donated to hit the goal. 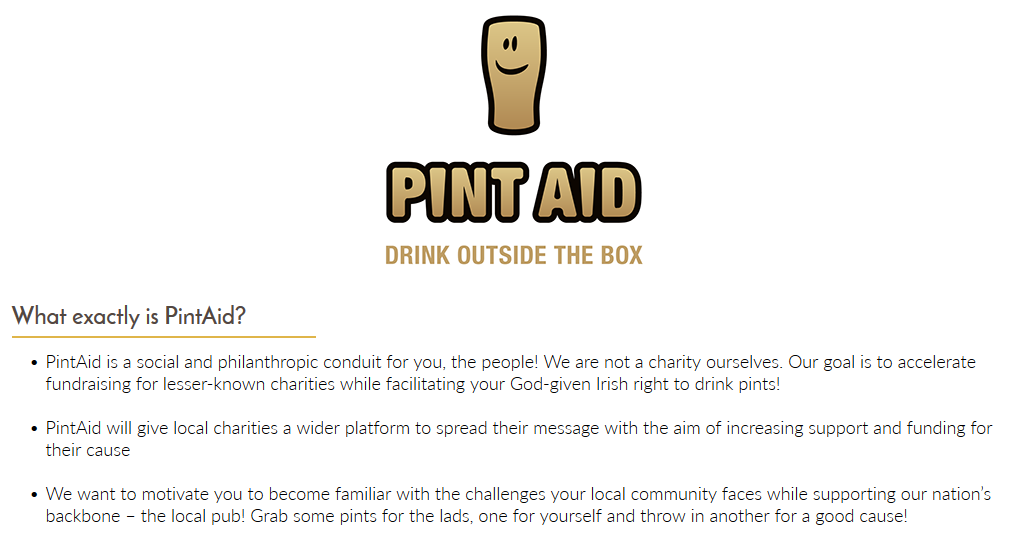 PintAid has nominated the first charity for the launch, but we understand that in the future there will be a nomination and voting process to choose the new charity.

There is even an option on the app to take advantage of your future drunk self by setting a reminder for whenever you’re out for a drink. For example, if you download the app on a Thursday and you know that at 11p on Friday you’ll be out in a pub, you can set a reminder on the app to donate at that time. You’ve already budgeted the money and included it in your drinking money budget, so it doesn’t seem like you’re spending extra on the night out.

The app will launch this Thursday (7th July) in Generator in Smithfield at 7pm.  The app will be ready for download on that day.

Find out more at www.pintaid.ie