post-title Serendipity and hospitality in the Lord Edward

Serendipity and hospitality in the Lord Edward 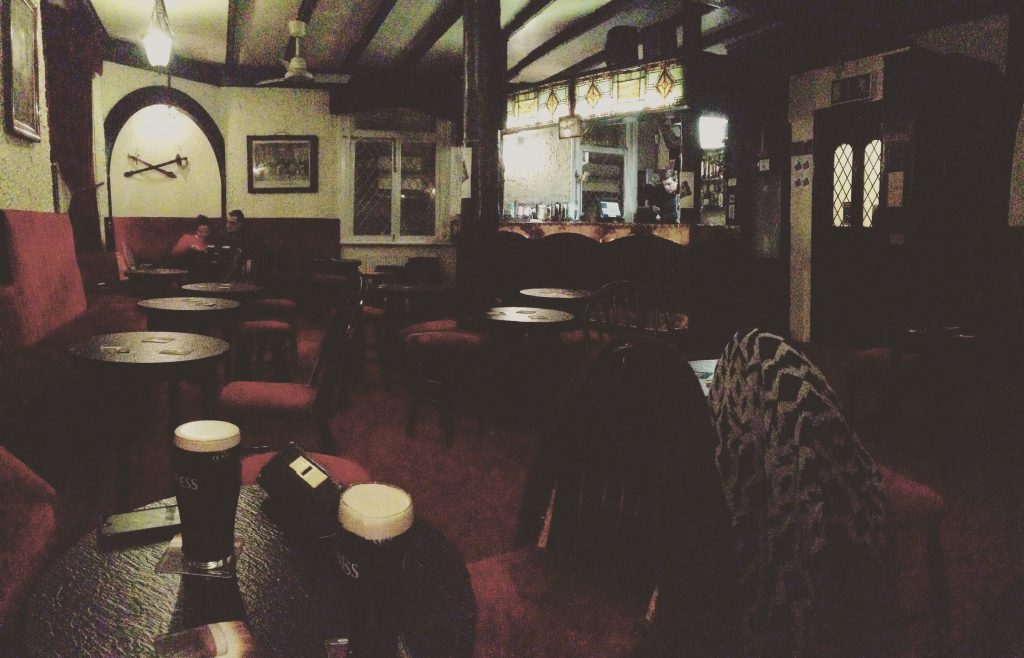 Last night we were in the Lord Edward in Christchurch with a friend for a few drinks.The room upstairs is a red velvet shrine to Robert Emmett, with muskets, pikes, and swords adorning the walls. Overlooking Christchurch you can see the trees outside getting tossed about in the cutting wind, while inside the fire crackles, the barman reads a book, and the pints slowly drain themselves.

Across from us sat a man warming himself on the fireplace. From his accent we picked up that he was American. Earlier in the night we talked quietly about how much we enjoy nights where you meet strangers visiting Dublin, inviting them over to the table, and making a new friend. Not tonight we agreed. We just wanted a chat.

My friend went off to the toilet and I sat there, playing with a bell beside my seat (used years ago to call for service). While playing with the curiosity, myself and the fire stoking stranger struck up conversation around it and talked about its prior use and whether it might be rewired to trigger a shock on someones seat downstairs, perhaps giving them a tickle on the arse. Or something like that. Maybe I’m embellishing it for the sake of the story, or the pints cloud the memory.

Anyway. We got talking and eventually we invited the stranger over to join us. At this stage the pub is beginning to fill up and to create the atmosphere that fit our initial reasons for coming to the Lord Edward. It was, before that, strangely quiet for a Thursday. The hum gathered and more friends joined us, engaging Mark (we found out his name after a while) in further conversation. 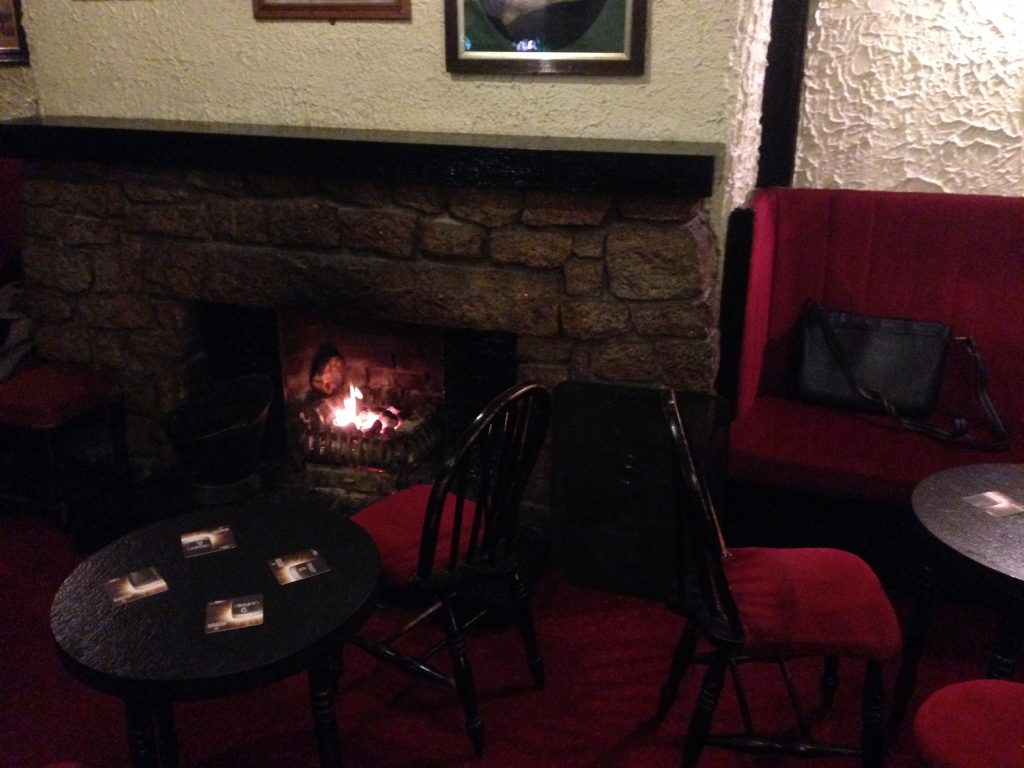 Mark told us that he used to work for Telecom Eireann’s US division and once visited Ireland. But that was 15 years ago. This time, he was in London on work and decided to make a flying one night visit to Dublin to retrace his steps. As he walked around, some things became a bit more familiar. He was, in particular, looking for an excellent seafood restaurant that he once ate in. It must have been pretty good to remember 15 years later. As he approached the Lord Edward he realised that this was the place. They still have a sign outside for the restaurant that once was. Unluckily for Mark, the restaurant part closed in the last 2 years. It had been open for decades and was well known as a place with high quality seafood.

After a chat with the young barman, who explained the situation, off he went to get some food in the Porterhouse. He returned for some pints, and that’s when he met us.

We get deep into conversation on all the topics you’re likely to discuss in a pub. We talk about topics of some importance and plenty others of none at all. We talk about the serendipity of the ringing of a non functioning bell bringing a group of people together.

A barman of an older vintage than the young lad from earlier chatted with Mark and got to know his story of recreating his steps. He told him the story of how the restaurant had closed. We went on having pints, chatting, and sharing stories until the end of the night, at which time we saw an amazing gesture of hospitality that solidifies our love for Dublin pubs.

The barman, Tommy, had dug out one of the old menu’s for the seafood restaurant, marked the item that Mark had once eaten, and inscribed a lovely note on the back page.

Just a little token of your past visit all of twenty years ago, maybe less.

Sorry you can’t eat it, but you have the memory.

Take care, thanks for calling again and again.

Let me know you got home safe.

He might not have had the salmon meunierre on this visit, but I think the hospitality from Tommy will stick with him.

It’s not a story of great importance or anything too exciting, or unusual, but it just typifies those kinds of nights in Dublin pubs that you can’t plan for and reaffirm why they’re so brilliant at bringing people together. 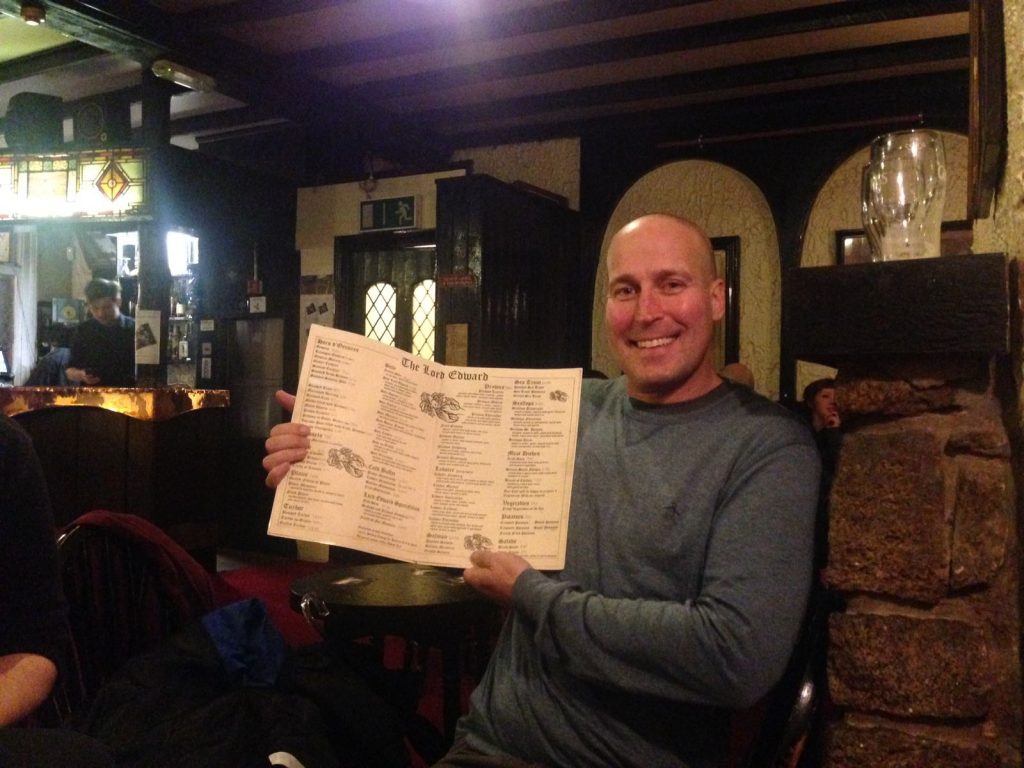 Mark and his menu. 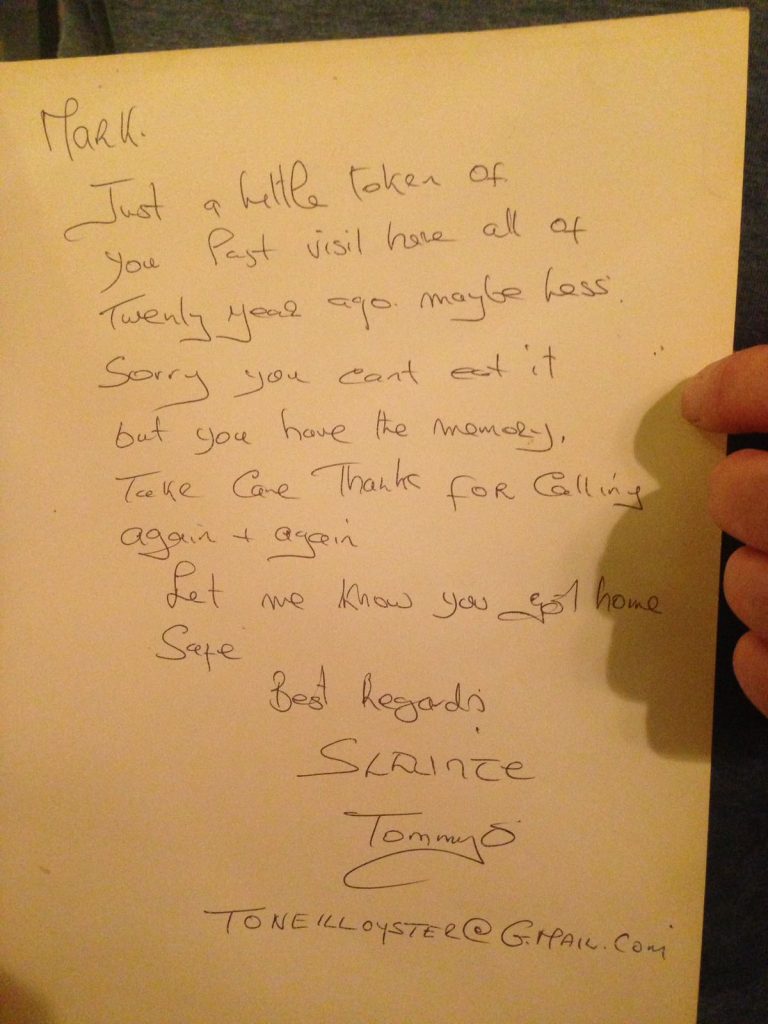 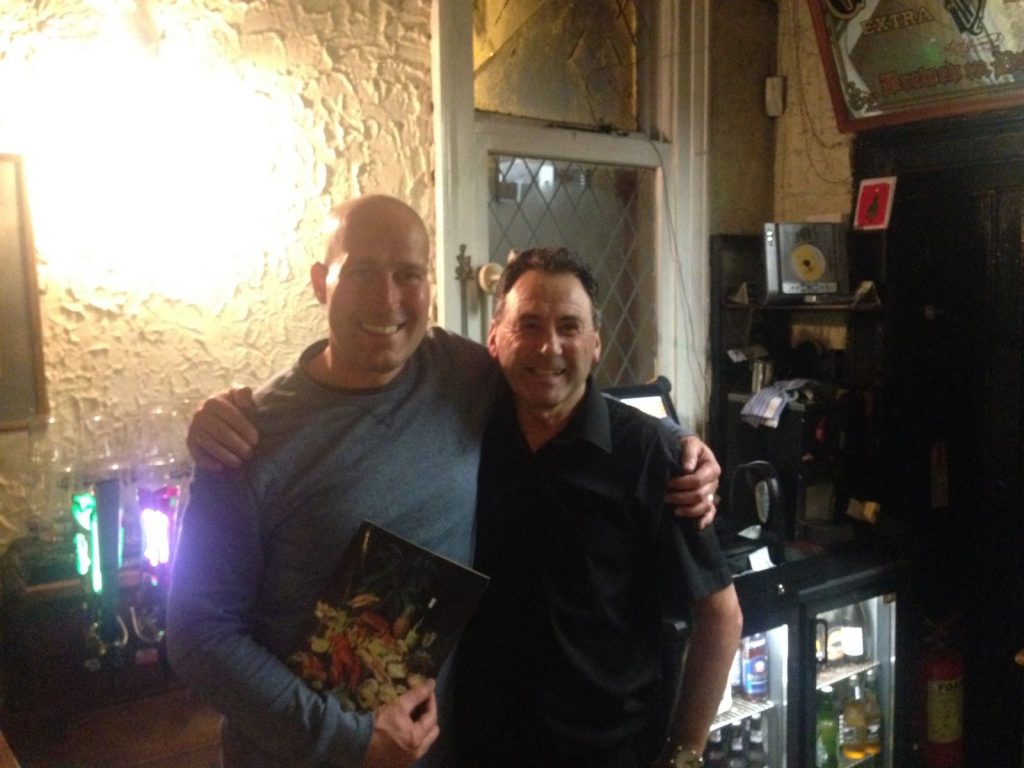