post-title The 12 days of Christmas in McGowan’s

The 12 days of Christmas in McGowan’s

McGowan’s have their own take on the 12 days of Christmas, running from Monday the 19th of December up to New Years Day. They’re giving you a reprieve from the family and being stuck inside with a late bar every night that they’re open. Naturally, they’re closed on Christmas Eve and Christmas Day, but every other day they’ll be going strong and til late.

Misletoe Madness. Free cocktail. It’s well known as one of the best single’s bars in Dublin and plenty of people have met their significant other here. It could happen to you in the run up to Christmas!

Charity night in aid of Pieta House and the Zoe Cryan foundation. They’re a family owned pub with a conscience too.

80;s, 90’s, and naughties night. They’re not above playing a bit of retro cheese.

Santa suits and dresses party. Get a free shot if you come dressed as Santa. Thankfully they’re not doing this on Christmas Eve, or else some local kids might have a skewed view of Santa and his lack of sobriety after closing time. 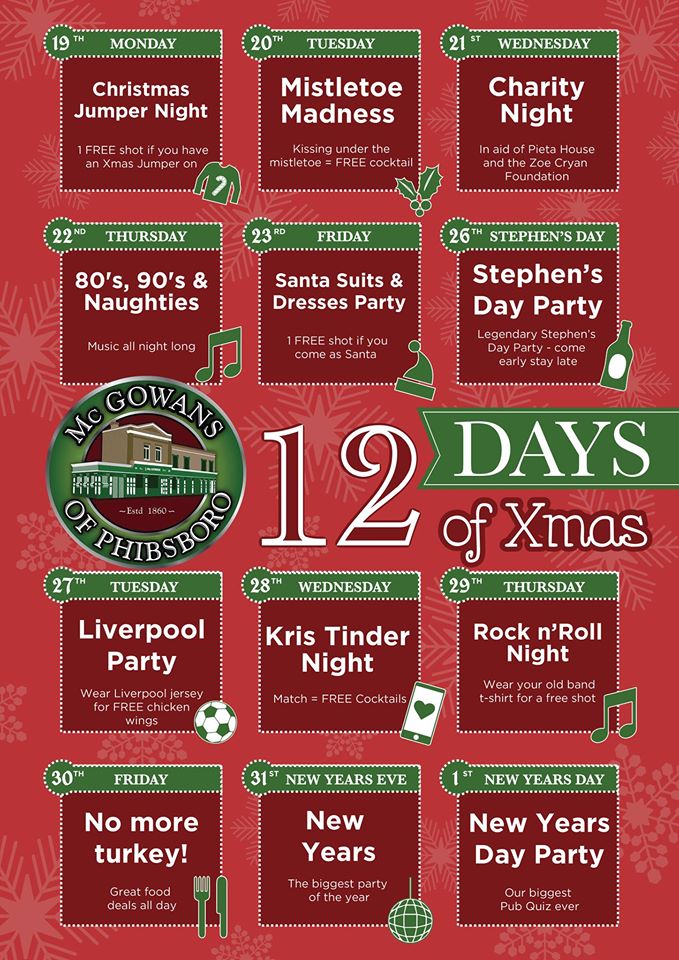 Stephen’s Day can be a great night out in Dublin. People are cooped up with the family for the last 2 days and want to let loose. McGowan’s will be one of the few places open with a late license.

Liverpool party. Get some free chicken wings when you wear your Liverpool jersey. They’re playing Stoke on that day.

Kris Tinder night. Bring the app with you, get a match in the bar and claim a free cocktail. Did we say this was a good single’s bar?

Rock’n’Roll night. Wear your old band t-shirt and get a free shot. We’re seeing a theme here. They’re good at inscentivising people to get into the mood of the night.

No more Turkey! They’ve got food deals on all day for when you want a break from the endless leftovers. The burgers here are good.

One of the biggest party nights of the year. Find someone to kiss at midnight.

If you’ve expended all your energy the night before, but still fancy some socialising, they’ve got a massive pub quiz on New Years Day.