5 Dublin Beer Gardens that you might not know about

We’ve come across a few spots over the last few years that we’ve been told by friends to keep under out hat. Some of them we’ve publicised in the past. Well, now we’re sharing them all with you.

Here’s 5 beer gardens that you might not have heard of. 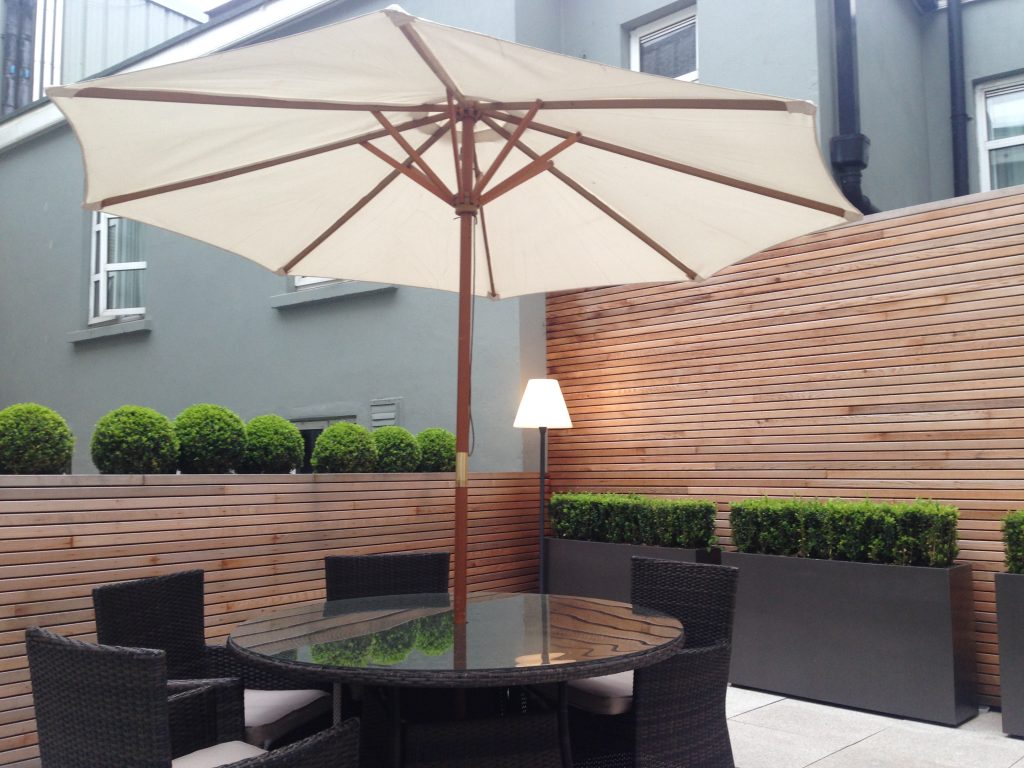 O’Sullivan’s on Westmoreland Street have what has become known in our circle of friends as ‘The Secret Beer Garden’. If you enter O’Sullivan’s, go to the back, and go up 2 or 3 flights of stairs you’ll enter a patio area with plenty of floor space, and, depending on the time of the day, a good bit of sun.

There’s usually two large circular tables with several wicker chairs and a parasol to keep the bite of the sun off you if you so wish. you’ll have to get your drinks downstairs, so it can be a bit of a trial to get them up, especially if you’re doing rounds with a group.

The beer garden has been largely empty most of the times that we’ve gone there, so it’s usually a good bet on a hot day. There’s one sign at the bar advertising the garden, but you wouldn’t necessarily notice it immediately. 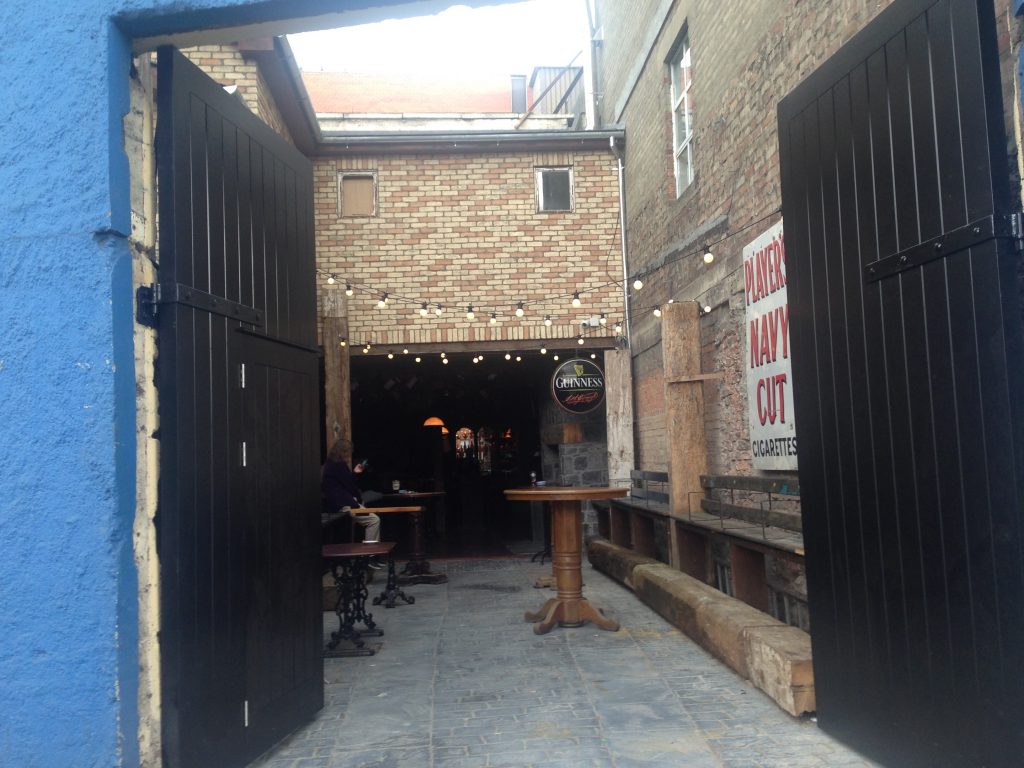 We really like the laneway  beer garden at the side of Ned O’Shea’s Merchant on the corner of the quays and Lower Bridge Street. There’ a massive inflatable pint on top of their replica Guinness gate, marking where to go. The area gets a decent bit of sun, and to top it off, you can sit on some seating that was salvaged from Croke park before it’s redevelopment. 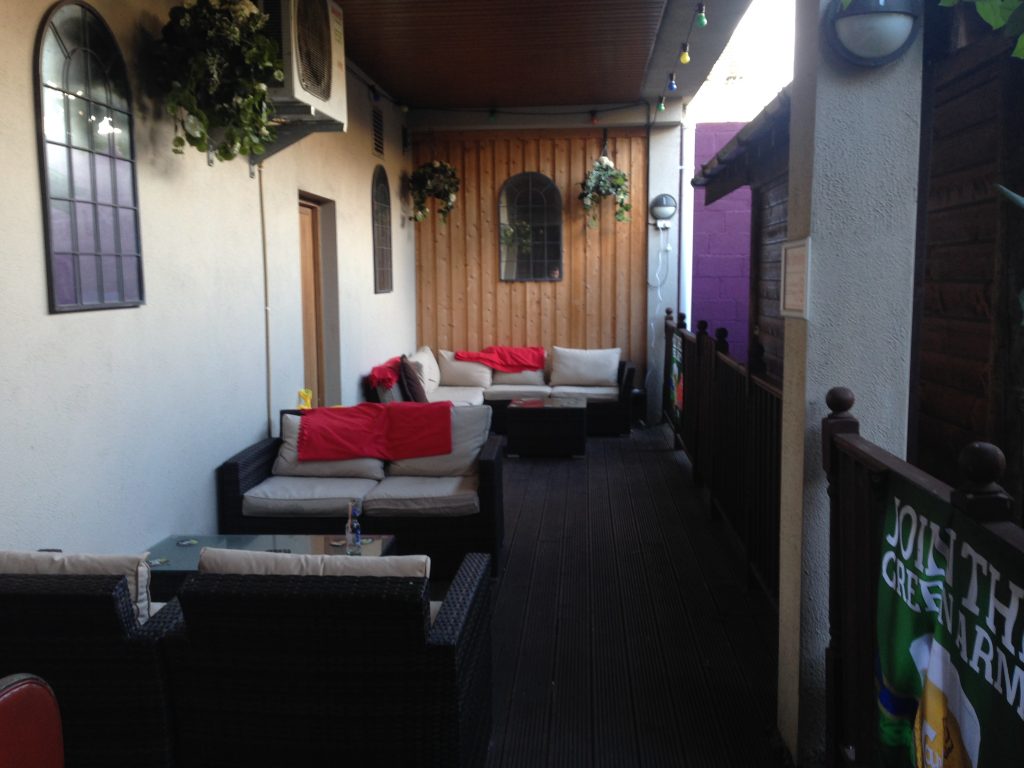 Kavanagh’s on Aughrim Street in Stoneybatter have a very nice beer garden out the back. Unfortunately, there’s not a whole lot of places to sit in the sun. For those that want to sit in the heat outside, but not directly in sunlight, this would be a nice option. There’s lots of wicker loungers, and there’s blankets for when it gets cold. There’s some screens outside as well, so you can watch matches out here. There’s another, bigger area to the right of that one pictured above.

Delaney’s on North King Street in Smithfield have a smashing beer garden out the back that gets plenty of sunlight. There’s one small covered area with high stools, and a few picnic tables in direct sunlight. They have a TV outside too, so it’s a good spot to watch matches outdoors. 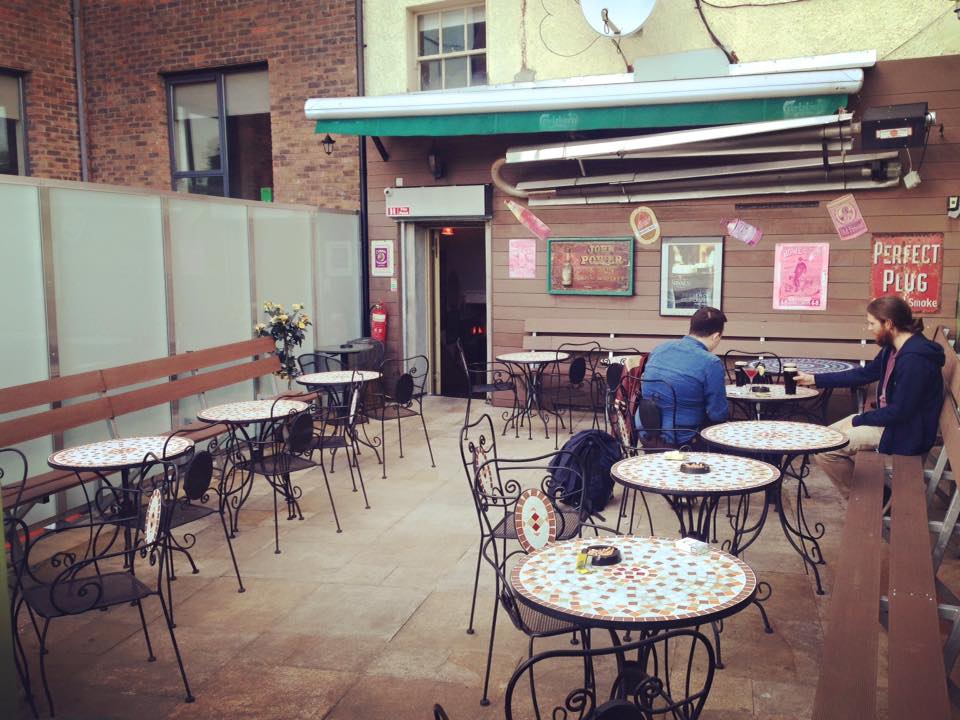