A few months ago we were on a pub walking tour with Kevin Martin, the author of ‘Have ye no homes to go to? A history of the Irish pub‘. During the tour, in a section about literary connections to Dublin pubs, Kevin mentioned the James Joyce short story, ‘Counterparts’. Kevin mentioned it as we stood outside O’Neill’s pub on Suffolk Street. Part of the short story occurs inside the snug of O’Neill’s.

Inspired by the brush with fiction, I read the story when I went home. It seemed to be me to be a good theme for a pub crawl. We suggest that participants in the crawl could go from pub to pub, and read aloud the relevant parts of the story in the very pubs that they are set. Any there’s a few pubs mentioned for such a short story.

It would also serve as an introduction to Joyce for those interested in his work, but a little bit intimidated by Ulysses.

The protagonist of the short story is a man named Mr. Farrington, a clerk in a clerical job. After being admonished by his boss for failing to complete his work, Farington leaves the office and goes to a series of pubs.

Participants can read along with the story through this link. It’s not all that long, but it might become harder to read as you go on. 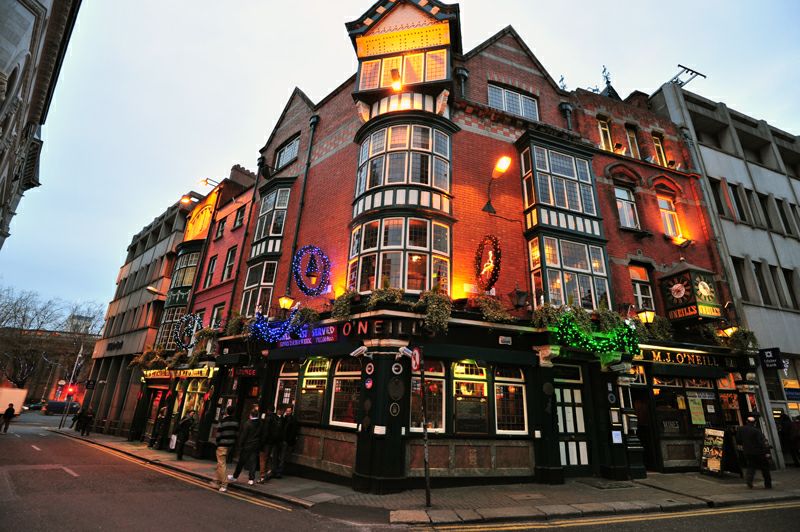 The chief clerk glanced at the hat-rack, but, seeing the row complete, offered no remark. As soon as he was on the landing the man pulled a shepherd’s plaid cap out of his pocket, put it on his head and ran quickly down the rickety stairs. From the street door he walked on furtively on the inner side of the path towards the corner and all at once dived into a doorway. He was now safe in the dark snug of O’Neill’s shop, and filling up the little window that looked into the bar with his inflamed face, the colour of dark wine or dark meat, he called out:

O’Neill’s is the first pub mentioned. Mr. Farrington’s office is on Eustace Street, just across Dame Street in Temple Bar. Here he had a glass of plain porter. Participants in the crawl can decide for themselves if they wish to drink as Mr. Farrington did, or opt for a more modern brew. We warn you, he hits the hard stuff pretty quickly. 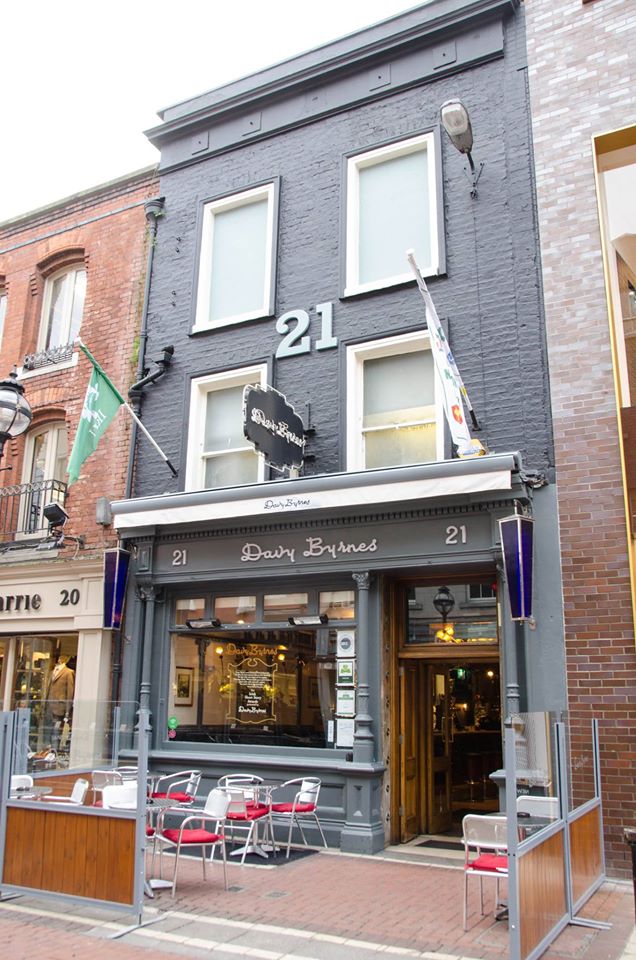 After a trip to Terry Kelly’s pawn shop on Fleet Street to get some drinking money, he then made his way to Davy Byrnes.

Nosey Flynn was sitting up in his usual corner of Davy Byrne’s and, when he heard the story, he stood Farrington a half-one, saying it was as smart a thing as ever he heard. Farrington stood a drink in his turn. After a while O’Halloran and Paddy Leonard came in and the story was repeated to them. O’Halloran stood tailors of malt, hot, all round and told the story of the retort he had made to the chief clerk when he was in Callan’s of Fownes’s Street; but, as the retort was after the manner of the liberal shepherds in the eclogues, he had to admit that it was not as clever as Farrington’s retort. At this Farrington told the boys to polish off that and have another.

Here is where the participants should deviate from the rate of imbibing undertaken by Mr. Farrington, as his thirst for libations isn’t a healthy thing to match. In Davy Byrne’s he had a half one and 2 whiskeys. Davy Byrne’s was, of course, also famously mentioned in Joyce’s Ulysses where Leopold Bloom had a gorgonzola sandwich. 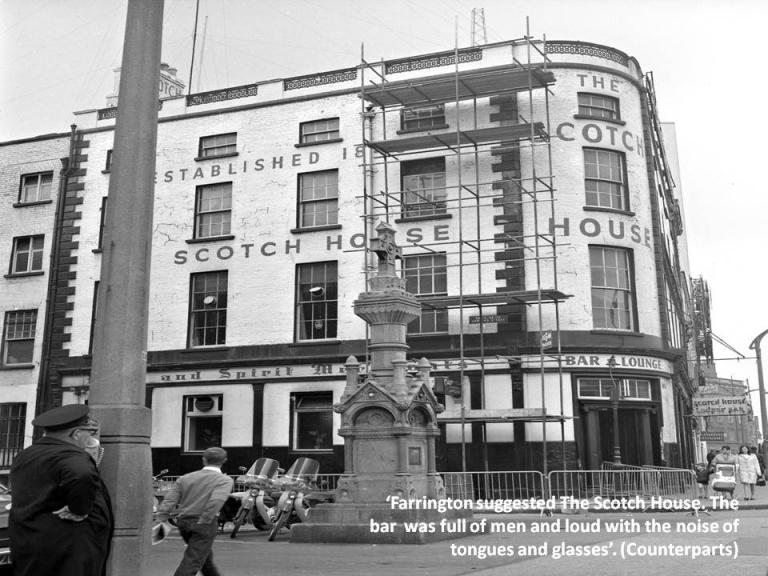 On Farrington then went to The Scotch House.

Rain was drizzling down on the cold streets and, when they reached the Ballast Office, Farrington suggested the Scotch House. The bar was full of men and loud with the noise of tongues and glasses. The three men pushed past the whining matchsellers at the door and formed a little party at the corner of the counter.

Here they met a man named Weathers, who was performing in The Tivoli as an acrobat. The 3 had 3 Irish whiskeys and appolinaris. Appolinaris was a sparkling water from Germany.

See a company reenact the scene in the room itself.

The final part of their crawl was to be Mulligan’s on Poolbeg Street.

When the Scotch House closed they went round to Mulligan’s. They went into the parlour at the back and O’Halloran ordered small hot specials all round. They were all beginning to feel mellow.

The parlour room at the back in now called ‘The Joyce room’. Here they had at least 2 more hot specials. I should repeat that it is not advisable to match the drinks had by the characters in the story.

And finally, he leaves the pub.

A very sullen-faced man stood at the corner of O’Connell Bridge waiting for the little Sandymount tram to take him home. He was full of smouldering anger and revengefulness. He felt humiliated and discontented; he did not even feel drunk; and he had only twopence in his pocket. He cursed everything. He had done for himself in the office, pawned his watch, spent all his money; and he had not even got drunk. He began to feel thirsty again and he longed to be back again in the hot reeking public-house. He had lost his reputation as a strong man, having been defeated twice by a mere boy. His heart swelled with fury and, when he thought of the woman in the big hat who had brushed against him and said Pardon! his fury nearly choked him.

Before anyone thinks this is a curious story of a man who goes on an adventure and has a grand old time, read on to the end. It’s not quite as whimsical a journey as Ulysses.

So, for your next night out or Sunday drinking jaunt, perhaps consider giving a bit of structure to your day through a Dublin literary classic such as this. We will, if we can, follow up with more suggested pub crawl read alongs.