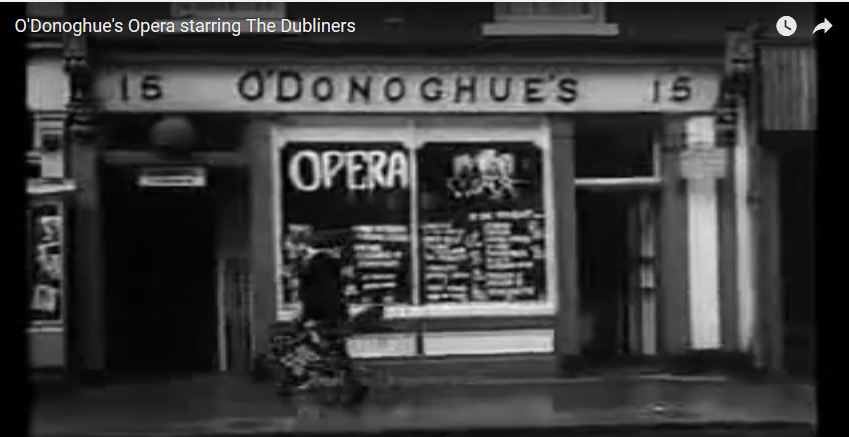 This is one of the more fascinating and odd pub related videos we’ve come across over the years. Apparently there was an Opera made in 1965 based around O’Donoghue’s pub on Merrion Row, starring Ronnie Drew, The Dubliners, Johnny Moynihan, the McKenna’s, and a slew of other influential Irish musicians.

Based on the ballad ‘The Night That Larry Was Stretched’, sung by a young Johnny Moynihan, Ronnie Drew finds himself caught in a hangman’s noose as a reward for his dubious career as “the best burglar in all Ireland”.

The film which is tongue-in-cheek (all the way) has the flavour of an Irish Spaghetti Western and captures the spirit of Dublin camaraderie like no other work before or since. The Guinness, the music, the wit and the grit, its all there in abundance.

The film was only aired in 1998 because it was never fully completed. It was rescued and edited into order by Tom Hayes and Sé Mary-Doyle for the 98 Dublin Film Festival. 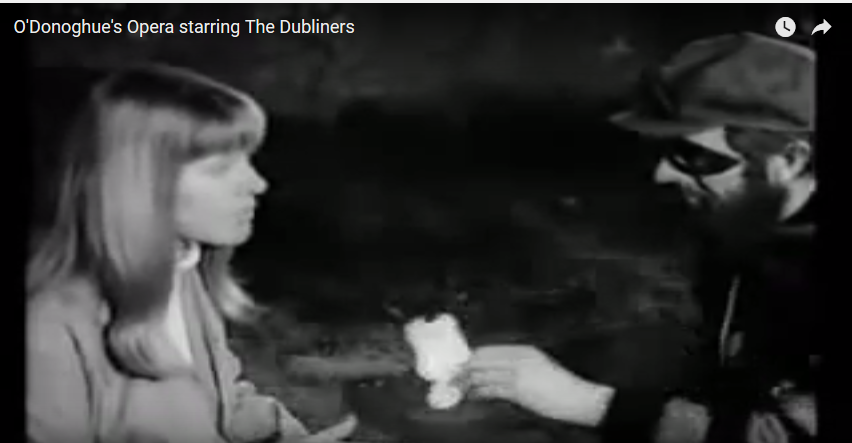 Ronnie Drew as Larry. He says to this young lady “I’ll see you in a half an hour in O’Donoghue’s.” He then comes home to his wife, downs a bottle of porter, displays a cabinet full of more porter, and then heads off to the pub.

The pub is well known for it’s association with the Dubliners and as a hangout at the time for musicians like Seamus Ennis, Planxty, and others. Andy Irvine wrote a song about the pub and it’s prominence for traditional musicians. The lyrics read like a who’s who of Irish traditional music of the time.

The Opera features song like ‘The Merry Ploughboy’, ‘Port Lairge’, ‘The Night Before Larry Got Stretched’, and quite a few more.

It’s a real treat that the opera has been restored and is now viewable both as a snapshot into the pub culture of the time and as an artistic endeavour itself.

If you have 37 minutes to spare, it’s well worth a watch.

I wonder what are the chances of seeing this remade by Lankum or another modern Irish group?