post-title The Church is so big and full of history they have a self guided tour.

The Church is so big and full of history they have a self guided tour.

The Church on Jervis Street is a pretty impressive building with a long and interesting history. If you go in for a drink you’ll notice people walking around exploring the building in awe.

Obviously The Church have noticed this and put together a brochure to allow visitors to give themselves a self guided tour and a brief history of the building.

We asked them for a copy of the tour brochure and they happily obliged. Here it is below:

Welcome to The Church Café, Bar & Restaurant. This is a self-guided tour around the building and grounds of the early 18th Century church of St. Mary’s.

History and background of the area.

Work on the church building began almost immediately and was largely finished by 1702. It was mostly the work of English architect William Robinson, who was also responsible for the Royal Hospital in Kilmainham. It is likely, however, that it was finished by his successor as Surveyor General, Thomas Burgh (also responsible for the Old Library in Trinity College). St Mary’s is currently most renowned as the first galleried church in Dublin and is a perfect example of classical church architecture. With the falling Protestant population and the change in the local area from residential to commercial use, St. Mary’s was finally forced to shut in 1986. The building was put to numerous uses over the next 20 years. It was then purchased by publican John M. Keating in 1997 and underwent a major refurbishment until 2005 and began trading as John M. Keating’s.  Remarkably, until the changes made for its renovation as a café/bar, it possessed the oldest unaltered church interior in Dublin and much of this has been beautifully preserved. It was acquired by its present owners in 2007 and renamed “The Church” 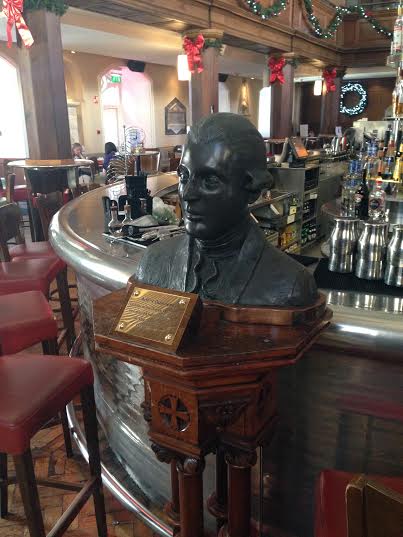 The founder of the Guinness brewery in Dublin married his wife Olivia Whitmore here in St. Mary’s Church in 1761.They subsequently had 21 children,10 of whom survived ‘til adulthood. Arthur II, followed in his father’s footsteps and wed his

wife Ann Lee here also. In front of the bust we see a fantastic example of a baroque stained-glass window. The framing of Portland stone shows a stylised design that bypassed most Dublin churches. The window itself exhibits a more elaborate pattern than usually seen in Protestant churches of that time where the stained glass was used more as shading than anything else. The gallery we see running around the interior of the church is the first of its kind in Dublin .This set a precedent as most Protestant churches followed this example over the next 150 years. The octagonal limestone pillars are timber clad and were extensively reconstructed during the conversion of the church in the late 90s.

Several influential people were baptised in St. Mary’s Church including: 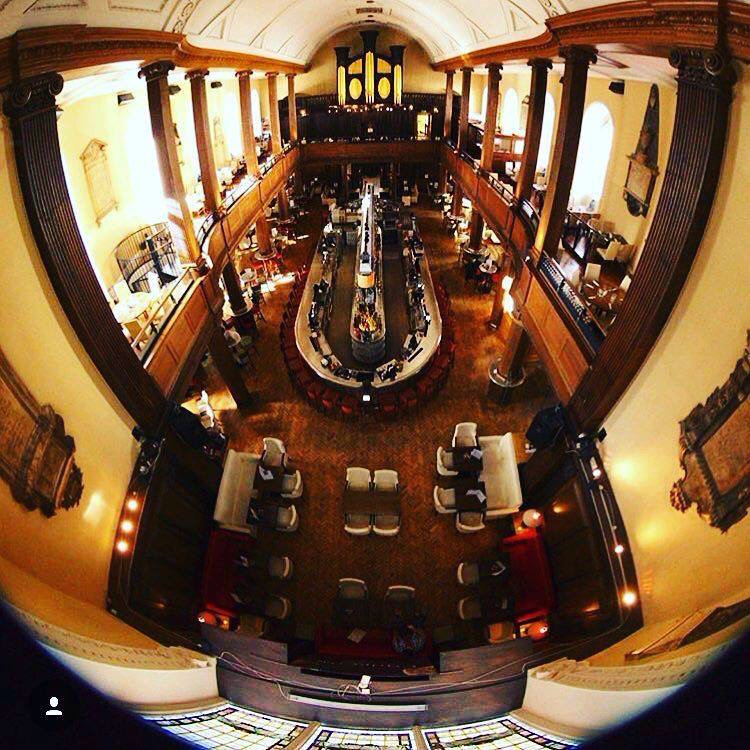 From the top of the stairs we get an excellent view over the whole converted church. We also see some of the 31 wall tablets, which are dedicated to people formerly buried in St. Mary’s crypt and graveyard.

This is the most striking feature of the interior of The Church. Several of the figures on the organ casing were decapitated by an iconoclast but it is otherwise unaltered from the early 18th century. George Frederick Handel, of Messiah fame, lived on nearby Abbey St. and was a regular visitor to St. Mary’s to make use of the organ. There are two further tiny upper galleries on either side of the organ pipes though it is hard to imagine they were ever used. Though currently not functioning, it is hoped to get the organ back in working order soon though this will cost in excess of €100,000.We now continue walking past the kitchenette and bar area and around to the other end of the gallery and through the door to the external tower.

Stop 5 – The glass enclosed bridge to the Tower.

The wooden floorboards leading to the external tower were removed from the Adelphi Cinema/Theatre in 1995 prior to its demolition. Some of the famous acts to perform on its stage, including the Beatles and the Rolling Stones are listed on the floor below you. This tower provides lift access to all floors of the church as well

as an emergency fire exit. Continue down the stairs past street level to the basement level.

Continue forward about 20 metres and through the door on your left and enter The Cellar Bar. These function rooms are located in an area that was excavated out from underneath the Church. They are not part of the original building. Continue to the area (marked with an emergency exit sign) opposite the end of the bar counter and walk up the few steps. 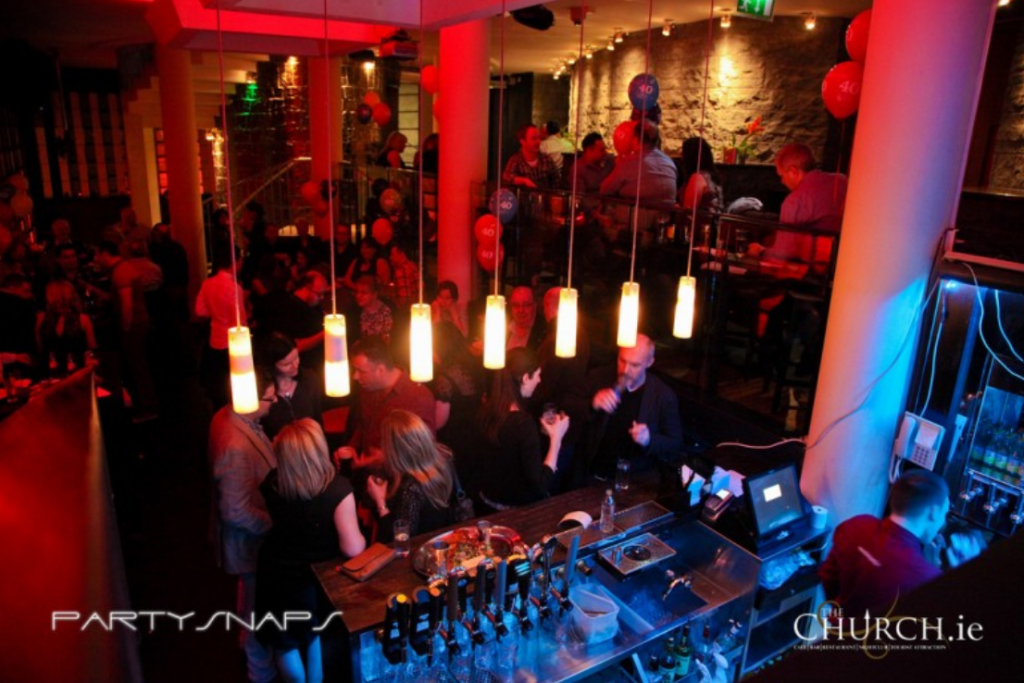 There were 6 crypts in the basement of the church and extensive excavation work had to be carried out during the conversion of the church to its current use.32 skeletal remains had to be removed and reinterred elsewhere. Access to the crypts was from an external stairwell. Continue out of the Cellar and walk past the entrance to the toilets and go up the stairs to ground level. On the way you will pass one of the magnificent 18th century timber staircases which formed the original entrances to the upper gallery.  All 18th Century churches followed this design of two staircases surrounding the centre organ.

These two doors behind the display table were the original entrance doors to the Church. Note the wonderful wall sculptures. Now walk through the exit door which leads outside to the Terrace. The former Church Yard is now home to our Beer Garden and Al Fresco dining area. (The red brick building on the far side of Mary St. houses the beer cold room and store of The Church. This means that if you drink a draught beer in The Church that the beer has travelled underneath the street! ☺

The terrace gives a splendid view of the original front entrance of St. Mary’s Church. The elegant Portland stone columns, with limestone surrounds, are elaborate for its period and certainly the most striking feature of the exterior. It is a later addition to the original church following its elevation as the parish church of the wealthy and powerful in the 18th century.

The stunted bell tower above the west front entrance is unfortunately the result of limited finances when the rich began to move to more fashionable areas on the Southside. The ‘temporary’ roof of the original construction is still in situ some 300 years later! 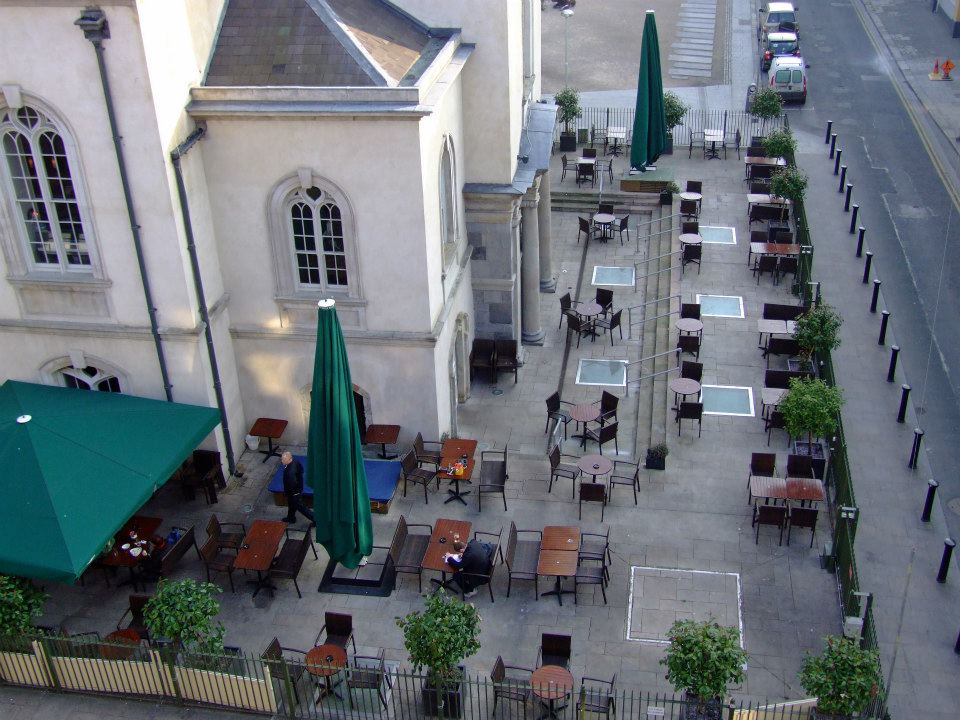 On the south side of the church building we find Wolfe Tone Park. This was once the site of the graveyard of the original St. Mary’s Church. In the centre of a burgeoning fashionable northside, the graveyard soon found itself overcrowded and as early as the mid-19th century bodies were removed to make more space – much to the annoyance of local residents who had to endure the spectacle and smell of putrefied remains! With its restricted space, few new burials took place here following the mid-19th century and by the 1940s the area was allowed to grow into a public park, with most of the gravestones being removed to the outer walls. This was made official in 1966 with the sale of the area to Dublin City Council and the removal of the headstones. Many of the original gravestones are still visible on the southern wall of the public space today.

The graveyard became the final resting place of several eminent Irish figures. Most notable amongst these being Lord Norbury – the infamous “Hanging Judge”, who sentenced Irish nationalist Robert Emmet to be hung and beheaded following his failed rebellion in 1803.

So that is “The Church” A Great Dublin Experience!.We thank you for visiting and we do hope that you have enjoyed the art, architecture and history on this tour. We suggest that you now find yourself a comfortable seat and relax and enjoy some of our Irish hospitality. And if you would like to return later to dine in the Gallery Restaurant we suggest that you make a booking at the reservations desk. Bookings are not required for drinks and/or dining in the main Bar.