post-title The man buried in a pub. Mr. Gaffney in Johnnie Fox’s

The man buried in a pub. Mr. Gaffney in Johnnie Fox’s 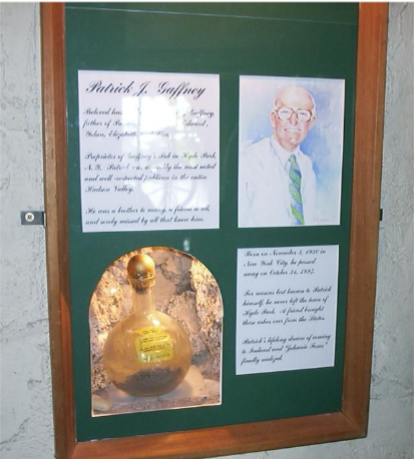 Being one of the oldest (est 1798) and well known pubs in the county of Dublin, we asked Johnnie Fox’s if they had any spooky or macabre stories about the pub for the month that’s in it. They got back to us with a story that’s not exactly macabre, but reasonably spooky. It also proves that not all supposed hauntings are malevolent.

Inside Johnnie Fox’s pub in Glencullen is part of the ashen remains of one Mr. Patrick Gaffney. Following his passing in 1997, it was decreed in his will that he wanted some of his ashes to be placed in Johnnie Fox’s pub. And so the request was granted and he remains there to this day.

The pub has this to say about their permanent guest.

Buried in the wall of Johnnie Fox’s Pub is Mr Gaffney, his remains are in a bottle where he was placed many
years ago, looking out at the customers that daily trek passed his vantage point, but how little they realise,
that in fact Mr Gaffney does his own walkabouts in the pub at night.

The pub is known for many things, including Mr Gaffney’s remains, it is well documented and even hit
newspaper headlines back in the day as it was such a debate on whether it would be allowed to happen,
burying someone in the pub and since his internment it is more than bumps in the night that happen here.

So much so, that, paranormal investigators have set up specialist equipment to catch the hauntingly strange
goings on of items moving, dropping from walls overnight when not a “soul” is in the pub (that the pub
knows of anyway)….. they are still trying to catch conclusive evidence meanwhile the staff simply say
“goodnight Mr Gaffney” when they are leaving and locking up…..let’s hope they never get a reply!