2. Quentin Tarrantino was once refused a pint from the Stag’s Head. He tried to pull the ‘Do you know who I am?’ card, but was rebuffed by the staff because it was after hours and one rule applies to all.

3. The Commitments used several Dublin pubs as filming locations. Including The Hairy Lemon, and their final gig was in Whelan’s.

4. “Good puzzle would be cross Dublin without passing a pub,”. Said by Leopold Bloom, a character in James Joyce’s ‘Ulysses’. Well, turns out it is possible. Rory McCann, a software developer developed an algorithm to plot a route from one canal to another without hitting a pub.

5. The Brazen Head boasts that it is Ireland’s oldest pub, dating all the way back to a coach house on the site in 1198. We think it’s far more likely the site of sailors and scholars getting pissed up with a few cans beside the river, a tradition that lives on to this day.

6. Downey’s pub in Dun Laoighaire has the privilege of being party to a strike by staff that lasted 14 years. A barman was sacked by the owner, and so, the unionised staff went on strike and were promptly sacked. They picketed the pub in shifts daily. The strike attracted international notoriety to the point that when an Irish fishing vessel, helmed by a Dun Laoghaire man, came upon a German U-boat during WW2, the chief officer of the submarine enquired as to whether “the strike was still on in Downey’s”. Unfortunately the pub no longer exists and has been replaced by the Dun Laoghaire shopping centre and cinema. Feel free to carry on the picket. 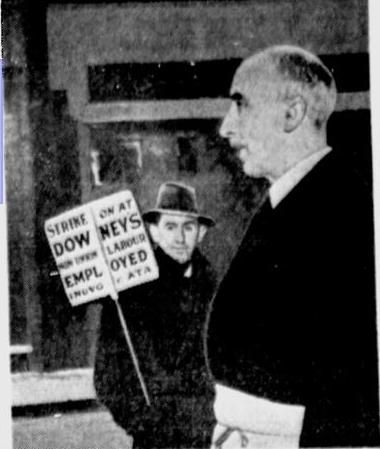 7. Kavanagh’s pub in Glasnevin (also known as the Gravediggers) has been run by the same family since 1833. The pub gains its knickname from its proximity to the famous Glasnevin graveyard, where the gravediggers used to knock on the back wall of the pub to ask for a pint. They’d then be served through the railings linking the pub and the graveyard.

8. Darky Kelly’s pub isn’t, like many Dublin pubs, named after a founder or owner. It’s named after a woman who was burned at the stake in 1746 for witchcraft. She owned a brothel named the maiden tower, was impregnated by Simon Luttrell, the sheriff of Dublin. The sherriff then did what any honorable man would have done and accused Darky Kelly of witchcraft to escape from his parental duties and the shame of fathering a bastard with a lady of ill repute. That’s how the story goes anyway. She was in actual fact, Dublin’s first serial killer. http://www.youtube.com/watch?feature=player_embedded&v=IOCOYEPCdIM

9. While not a pub, Coppers is a bit of an institution. In 2011 Copperface Jack’s nightclub made €214,000 from the coat check alone. Possibly why most of the patrons now wear as few items of clothing as possible.

10. Although pubs are not allowed to sell alcohol on good friday, there are certain licenses that allow some establishments to sell alcohol. Here are a few ways to buy a drink on good friday– 1) Take a flight or a ferry, 2) Go to a greyhound or horse race meeting. 3) Go to the theatre. Bars with a theatre license are allowed to sell booze on this day. 4) Go to a hotel. So long as they serve you food, they can sell you booze. They might just throw some mouldy sandwiches at you to get away with it. 5) Join the military. Barracks are allowed to sell alcohol. 6) Go to a rugby match. What could be more thrilling than seeing Gustonians C team vs Old Horse C Team battle it out with some legally sold liquor. 7) Buy an intercity train ticket. Pubs in train stations can sell alcohol. Think of your one way ticket to Drogheda as the entrance fee.

11. The Asterix the Gaul appreciation society meet in The Long Hall on George’s street. You can always find a few copies behind the bar. Wild Boar sold separately.

12. Although the Dawson Lounge on Dawson street is considered the smallest pub in Dublin, it does have a semantic rival. Lotts Cafe bar has a snug that they consider “The smallest ‘bar’ in Dublin”. Who gets in the guide books then? 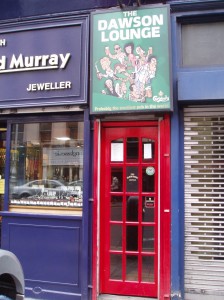 13. The best snug in Ireland? 110 snugs battled it out, but Toner’s on Baggot street are the reigning champions.

14. The most potent beer we’ve been able to find on sale in the city is Samichlaus (14%), an Austrian beer served in Against the Grain, Brew Dock, and The Black Sheep. Find something with a higher alcohol content? Prove us wrong.

EDIT: Boy were we wrong on that! The Black Sheep stocks Brew Dog’s ‘Sink the Bismark‘, which stands at 41% and costs €80 for a 330cl bottle.

15. Gin fan? The Gin Palace on Abbey street has the biggest selection of gin in Dublin. They have 59 different types of gin in stock at all times……and some tonic too.

17. In October 1922, very soon after national independence, the Dáil (Irish parliament) set about to tackle the defining issue of the time…..the price of the pint in Dublin. After the christmas recess of 1923, the very first question of the very first session was about the price of a pint. Back then the price was 100 times less than it is now.

Source: The Story of the Irish Pub: An Intoxicating History of the Licensed Trade in Ireland by Cian Molloy.

18. A scene from Sergio Leone’s ‘A Fistful of Dynamite was filmed in Toner’s. There’s a photo of him on the wall holding a rifle in the pub.

19. As of 2006, Dublin’s longest serving barman was Joe Casey, who worked/works at the Windjammer on Townsend street and has worked there since 1954. We called to see if Joe was still tending bar, but nobody picked up.

20. Who has the largest selection of whiskey in Dublin? For our money it has to be The Temple Bar. Honorable mentions to the Palace and Bowes Lounge. 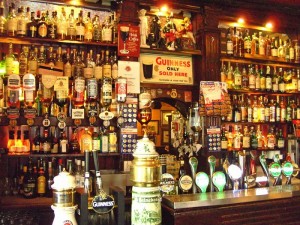 21. It’s probably a four way split for the pub with the most beers on tap, and guess what? They’re all craft beer pubs. Against the Grain, Brew Dock, and The Black Sheep all have 23 craft beers on tap, making it difficult to sample every brew in the house. They also boast 100 bottled beers from around the world. The same can all be said of L.Mulligan Grocer in Stoneybatter.

22. The cheapest pint of Guinness in the city is in Dicey Reilly’s Garden on Tuesday nights at €2.00. You’d do well to find better than that.

23. The Hole in the Wall on Blackhorse Avenue is generally regarded as the longest pub in Dublin. It’s not a freak of architecture or anything, it’s just the longest one we’ve got.

24. Johnny Foxes in the Dublin mountains is generally regarded as the highest pub in Ireland, but they’ve had some competition. Pubs in Kerry, Roundwood, and Derry have all laid claim to the title. The pub in Derry is struck off because it it not in the ‘state of Ireland’. The pub in Kerry haven’t pursued the claim as much as Johnny Foxes and aren’t open all day, every day. So they might be higher, but just aren’t bothered advertising it. The pub in roundwood make their claim as the highest pub in the ‘highest village’. Now, that’s a bit pedantic. We’re not convinced that Johnny’s is definitely the highest, but they certainly have a strong claim. Let the battle rage on.

25. 114 hours and 20 minutes. That’s how long it took Dave Browne to break the Guinness world record for longest continuous guitar playing session in The Temple Bar pub. He played 1,372 songs in total, and if he’s anything like other Dublin cover musicians, at least 200 of those were ‘Galway Girl‘.

The 26th unofficial fact is that Publin lists over 200 pubs and over 500 drinks specials. Enjoy and tell your friends!

*If you’ve something more accurate than these ‘facts’, let us know via Twitter- http://www.twitter.com/publinie  or facebook- https://www.facebook.com/Publinie